Why is “Those Who Wish Me Dead” rated R? The MPAA rating has been assigned for “strong violence, and language throughout.” The Kids-In-Mind.com evaluation includes a couple of kissing and hugging scenes between a married couple, several scenes of forest fires causing the death of three children and a man, several scenes of people being murdered by explosion and gunshot with bloody wounds shown, and over 70 F-words and other strong language. Read our parents’ guide below for details on sexual content, violence & strong language. A smoke jumper (Angelina Jolie) cannot get over the trauma of not being able to save three boys during a forest fire, when she encounters a 12-year-old boy (Finn Little) running away from the assassins who killed his father. Isolated in a watchtower, the two of them must also escape a fire that’s consuming the surrounding forest. Also with Jon Bernthal, Aidan Gillen, Nicholas Hoult, Jake Weber, Medina Senghore and Tyler Perry. Directed by Taylor Sheridan. [Running Time: 1:40]

Those Who Wish Me Dead SEX/NUDITY 1

– A husband and his wife hug and kiss and he kisses her clothed, pregnant abdomen. A husband and his wife hug, kiss, and hold hands. A woman talks to a boy about “swapping spit” with girls.
► A woman wears low-cut tops that reveal cleavage in a few scenes. A woman takes off her top to treat a wound on her shoulder and we see her bra, cleavage, bare abdomen and back. A woman’s shirt gets wet and becomes see-through and we see her bra strap and the flesh tone of her back. A boy urinates on the side of a road (no nudity is shown).

Those Who Wish Me Dead VIOLENCE/GORE 6

– Parachutists (smoke jumpers) jump from a plane toward a raging forest fire: after landing, the wind shifts and the blaze engulfs them (we see one person struck by a falling tree and he catches fire) as three children come out of the fire toward them calling for help and a firefighter freezes as another tells her, “They’re gone,” (we understand that the children were killed in the fire, and we see this scene in flashbacks several times).
► Two men arm themselves and wait on a road for a man to pass in a car, planning to kill him; they shoot at the car and the driver is struck in the arm causing the car to careen over a steep hill and a boy in the car gets out and hides under a tree watching as the men shoot the driver many more times (blood sprays and the man jerks from the bullet strikes). A woman on a road asks if anyone is hurt after seeing a guardrail broken and a man approaches her car and shoots her in the head (we see blood and brain matter spray against the passenger side window and we see her later with a large bloody head wound when her body is found). A sheriff is shot in the face after exiting his vehicle (we see a bloody bullet hole). Two men enter a house after identifying themselves as officials investigating a report of a gas leak; they later leave the house, it explodes and we hear that a family was inside and they were all killed. Two armed men search through a house for a man and do not find him.
► Two men attack a woman, she is thrown over a table and onto a floor, they hold guns on her while questioning her and one man holds a red-hot fireplace poke to her face asking her for information; the woman sprays the men with flames from a spray can ignited by a fireplace fire burning one man’s face (we see reddened and blistering skin). Two gunmen approach a forest watchtower where a young boy and a woman are hiding; another man is sent up to the tower and the two men on the ground open fire on the people in the tower (the man is struck and we see blood), and the woman and the boy slide down on a cable and run away. A woman shoots at two armed men that shoot back at her; one man is shot and falls to the ground, and he is shot two more times until he is dead (once at close range). A woman chases a young boy, she tackles him and he kicks her (no injuries are shown).
► A man yells at two other men and tells them to shoot him, he moves close to one man and attacks him, they struggle briefly and the other man hits the attacker in the head with a gun butt. A man with a gun moves through a forest looking for a woman, the woman hides behind a tree and swings an ax at him a couple of times, she stabs him in the foot, hits him in the arm and we see blood as he moans, a young boy attacks the man and they struggle, the man punches the woman in the face, and pins her to the ground where he continues to punch her (we see her bloody broken nose) until the boy comes out of hiding and the man draws a knife; he moves toward the boy and the woman hits the man with the ax several more times and leaves him to be engulfed by flames in a forest fire (we hear him screaming and see him thrashing).
► A woman rides in the back of an open pick-up truck, stands in the open bed with a parachute strapped to her back, she pulls the release cord and is yanked out of the truck; the chute carries her in the air briefly before she falls hard on an embankment on the side of the road (she does not appear to be injured); a police officer arrives and handcuffs the woman, puts her in his cruiser and takes her home.
► A woman and a young boy run down a steep hillside away from a raging forest fire, they jump into a stream and lie back under the surface of the water, coming back up only long enough to get a breath until the flames subside. Lightning flashes in the sky and strikes the ground several times leaving charred patches of earth; a woman and boy run through the area and the woman is thrown from one strike (we see her later with burn marks on her foot and shoulder and she winces when she pours alcohol on her foot). Lightning flashes around a forestry watchtower and a woman on duty jumps off and catches onto a rope as the tower is struck; she slides down the rope and lands hard on her back (we see her later with rope burns and splinter in her hands and she winces when she pours alcohol on them). A man throws flares into a pile of fallen pine needles and starts s raging forest fire. A husband and his wife hold hands and put on breathing masks as a fire rages around a forest watchtower where they are hiding. A man drives with his young son and speeds away from a school, swerving into traffic and appears nervous.
► A man talks about killing anyone that sees his and another man’s faces. A young boy says that he watched his mother die from cancer. A police officer approaches men and a woman and admonishes them not to do dangerous things.
► A boy urinates on the side of a road (we hear the trickle but do not see anything).

Those Who Wish Me Dead LANGUAGE 10

Those Who Wish Me Dead SUBSTANCE USE

Those Who Wish Me Dead DISCUSSION TOPICS

Those Who Wish Me Dead MESSAGE

– Saving another’s life is one way to recover from guilt and depression. 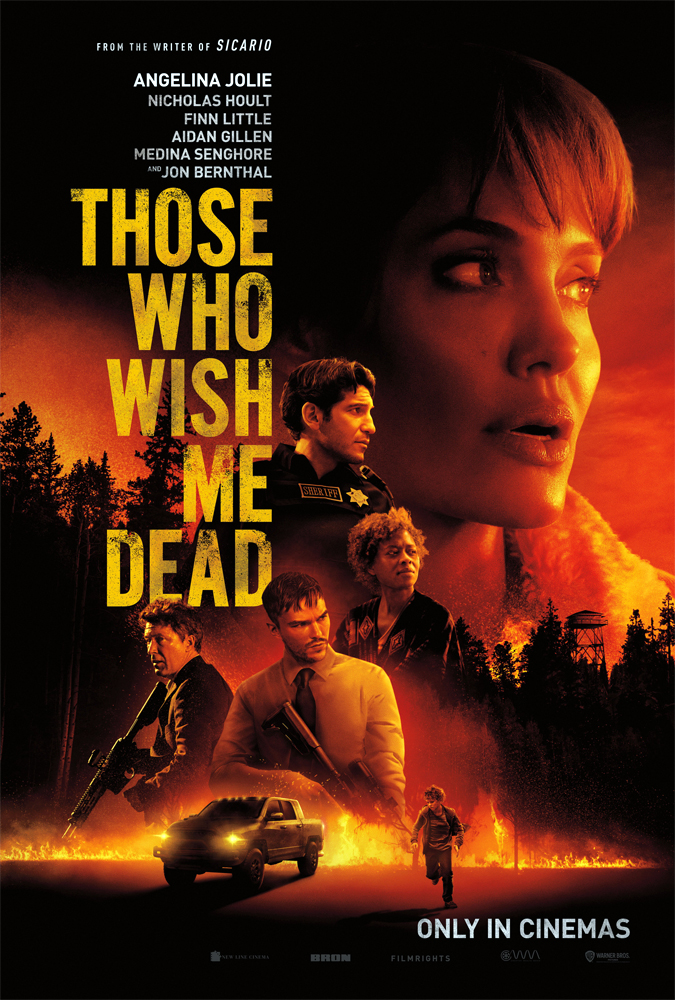