Why is “Stowaway” rated TV-MA? The TV Parental Guidelines Monitoring Board rating indicates that “this program is specifically designed to be viewed by adults and therefore may be unsuitable for children under 17.” The Kids-In-Mind.com evaluation includes some partial nudity in a bodybuilding poster, a couple of spacewalks with one ending in the death of one of the astronauts, an unconscious man is found with a bloody wound, a woman’s arm is broken, discussion of not having enough oxygen for a trip to Mars, a few scenes of people becoming nauseated by G-forces during a takeoff, several arguments, and at least 4 F-words and other strong language. Read our parents’ guide below for details on sexual content, violence & strong language. Three astronauts — a commander (Toni Collette), a doctor (Anna Kendrick) and a biologist (Daniel Dae Kim) — begin a two-year mission to Mars. When they discover an injured launch engineer (Shamier Anderson) trapped in a ceiling and rescue him, the life support system is irreparably damaged and they now have only enough oxygen for two people. Directed by Joe Penna. [Running Time: 1:50]

– A large photograph on a wall shows a bodybuilder posing and clad only in tight, skimpy Speedo trunks (his bare chest, abdomen and legs to the hips are shown, with a slight bulge at the groin and the bottom of one buttock). A man removes his shirt and we see his chest and abdomen.

– A woman in a spacecraft sees a few drops of blood drip from a ceiling panel; she drills the bolts open and an unconscious man falls out, pinning her arm to the floor as she shouts in pain; another woman and a man carry the unconscious man to another room and cut off part of his spacesuit to find a large bloody area on his lower abdomen that they suture closed and the second woman puts a bandage on the injured woman’s arm (we see the arm with two large red splotches) and a plastic matrix cast is placed from thumb to elbow as the woman says that her arm hurts.
► A woman space walks through waves of solar dust and radiation, and nods to a woman inside as we see her face inside her helmet being burned in large red blotches and she gasps for breath; the camera pans around her and we see two red spots burn into her spacesuit, as the scene ends. A woman and a man suit up and go outside for a spacewalk, pant and grunt as they climb cables, an alarm sounds, and a voice announces a solar storm approaching.
► A close-up of a woman wearing a spacesuit lying on a flight couch shows her being jostled and shaking violently during takeoff as we hear loud mechanical noises; we see another woman shaking, and also a man as we hear that the ship will reach 5Gs and we hear the man retch and vomit into his gloved hands (we do not see vomit) and we then see him holding a vomit bag. A man seems to be nauseated and a woman asks jokingly if he wants a beer; he snickers. A man holds his hands to his face and may be nauseated. A man is shown outside a spacecraft where he sways, grunts, and seems to be briefly dizzy. Several spacecraft scenes feature a man and two women panting, gasping, and grunting as they walk and carry items.
► An injured man becomes conscious and panics, talking fast and hyperventilating as he looks out a viewing port to see Earth and looks horrified; he is told that he has a concussion and is instructed to relax. A man sits on a floor and slams his head back against his bunk several times, grunting and sobbing before using a tablet to record a goodbye message to his sister. A man trains to climb cables for a proposed spacewalk, but he falls and hits his head and eye, shouts in pain and gives up (we see no head injury).
► A gas sprays out from a carbon-dioxide scrubber in a ceiling and a man and a woman turn off the gas as another woman removes the scrubber and we see that it is charred; we hear that the scrubber is permanently damaged and cannot be repaired, leaving oxygen enough only for two people, but four people are on board for a five-month trip to Mars and they do not have enough fuel to return to Earth. A man pours green algae into plastic containers to make oxygen. A man thaws out all of his algae samples and they become brown and rot and much of another batch also dies; he hangs his head in his hands and cries. A woman views dead algae and becomes tearful.
► A man on a spacecraft takes a syringe and a vial of a clear drug, loads the syringe, and takes it to another man telling him the injection will kill him by putting him to sleep first; and that he must kill himself because he is the cause of a permanently damaged life support system. On a spacecraft after a man tells a woman that she has never sacrificed anything, she volunteers for a mission on which she knows she will die; she, another woman, and a man all cry as she prepares to leave. A woman says that she saw a man drowning in the ocean, called authorities to help, and tried to save the man herself, but failed; she says a third person saved both of them. Two men argue, two women argue, and a man and a woman argue. A man and two women argue, and one of the women says, “We have to take someone’s life.” Two women and a man argue about requiring another man to commit suicide. We hear that a man found unconscious on a spacecraft is the guardian to his young teen sister and did not mean to be aboard the spacecraft. A man says that his father died in a fire while rescuing him at age nine and the sister as an infant. Several scenes include a woman speaking on a headset to Mission Control on the ground, and we hear only static and muffled vocalizations in return; once, she angrily argues with the party on the other end, hangs up, and then cries.

– A man gives another man a hypodermic needle and a vial of a drug to use to kill himself (we do not see a suicide). A man becomes nauseated and a woman jokingly offers him a beer (there is no beer), and a woman says that she once saw several drunk men on a beach.

– Space travel is dangerous even with safety protocols in place, and some people will invariably die. 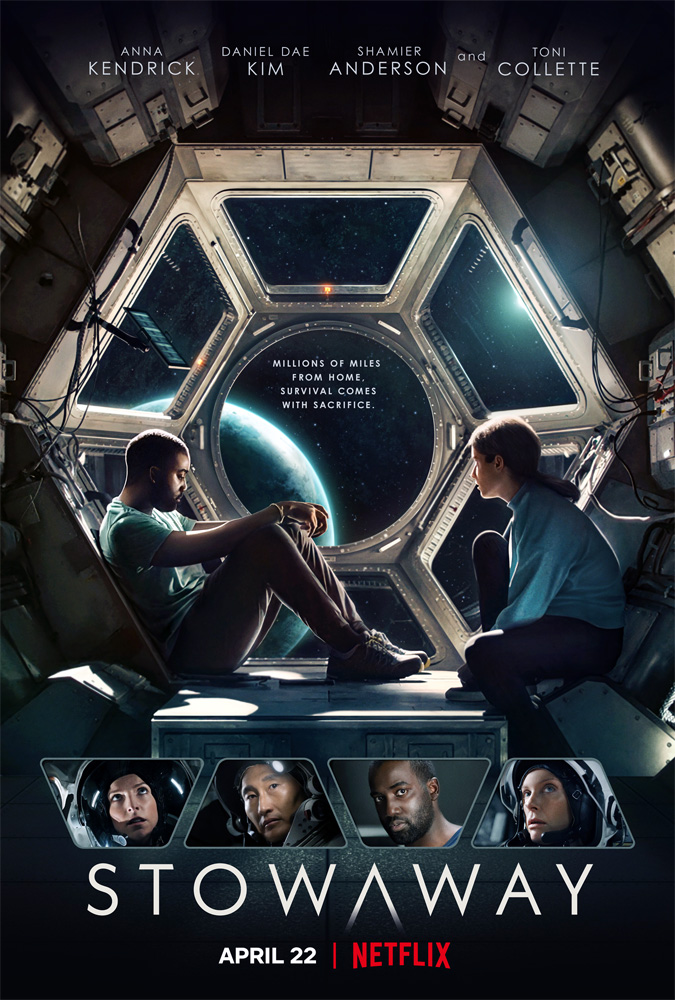