Why is “Finch” rated PG-13? The MPAA rating has been assigned for “brief violent images.” The Kids-In-Mind.com evaluation includes a fully nude man without details shown, the murder of a woman and a child without blood shown, discussions of a solar flare and the devastation it caused, scenes of surviving UV exposure, a few arguments, and some strong language. Read our parents’ guide below for details on sexual content, violence & strong language. With the ozone layer destroyed by a solar flare, and life no longer possible on Earth’s surface without a radiation shield, a surviving scientist (Tom Hanks) constructs a very intelligent and caring robot to make sure his dog can be taken care of after his death. Also with Seamus and the voice of Caleb Landry Jones. Directed by Miguel Sapochnik. [Running Time: 1:55]

– A fully nude man seen in profile sits on a stool and we see his bare side, the side of his chest, back, legs and buttock. The metal connections at the hip in the back of a robot resemble the shape of buttocks.

– Several scenes show heavy dust blowing through the air, large billowing and rolling clouds of dust barreling toward a man, and swirling funnel clouds tearing up power cables and lifting an RV off the ground (a man, a dog and robots are thrown around inside the vehicle).
► A flashback shows a woman and her young daughter scavenging in an abandoned grocery store and the woman leaves and gives the child a gun to defend their items; a man with a shotgun demands that the child give him what she has and she threatens him with the gun, her mother returns and argues with the man, and the man shoots the woman and the child (we see the woman struck without blood shown and we hear the child scream).
► A man drives a large truck and rams into parked and abandoned cars on a road as we hear an announcement that the air pressure is dropping and we see a giant rolling cloud of dust moving toward him; the man hurries to get himself and his dog and a small robot to safety before the cloud covers them. A man walks through an abandoned grocery store and he sees dead and badly decayed or burned bodies on the floor; a robot picks up items that seem to be intact (e.g. bottles) and a portion of a shelving unit collapses and cans of dog food fall on the floor. Two robots go into an abandoned hospital to look for medicine and when one robot reaches for a box of cookies, it is caught and crushed in a bear trap that snaps closed on it; we see it twitching briefly until a man switches it off. A man and a robot run out of a building where they hear noises, they speed away in an RV and later realize that they are being followed; they drive faster and speed off the road to hide under an underpass, and when the RV gets stuck because the underpass is not tall enough, the robot pushes it so that it is not visible to the other car chasing them while the man holds a loaded gun, but the solar panels on the roof of the vehicle are torn off.
► A man wears a protective suit in many scenes and we understand that the air quality and UV exposure make it dangerous to be outside without it; the man holds his hand in the sun briefly and we hear his skin sizzle and burn marks appear.
► A large city is shown completely empty and covered in thick layers of sand. A computer voice indicates the UV level, the radiation level and a man’s body temperature throughout the movie. An RV’s tire is shredded after a storm and a robot lifts the RV off the ground to change the tire. A dog howls mournfully and we understand that a man has died; a robot wraps the body in a tarp and places it on a mattress that the robot sets on fire.
► A man explains to a robot that its reason for existence is to protect a dog in the absence of the man. We hear that a super storm that will last 40 days is approaching and a man prepares to head west to avoid it. A man yells at a robot in a few scenes. A man explains that it is dangerous to travel at night because there could be starving people around that will take what they have. A man describes his father as having Viking blood and that he left before he was born. A man says that he is dying.
► A robot drives an RV into a parked car then reverses into a cement block. A man teaches a robot to walk and it falls to the floor when it reaches the end of its tether. A robot falls to the floor when it is standing in an RV, as the vehicle starts moving. A man pours popcorn onto a metal hubcap and when the sun’s rays hit it the corn pops. A dog and a robot bark at each other; the robot is trying to understand what a dog is saying. A dog growls at a robot. A man finds a puppy in a backpack. A butterfly smashes on the windshield of an RV (we see goo).
► A man gags and vomits and we hear splatter and retching (we do not see goo). A man holds his stomach, stumbles and gags, coughs deeply and spits some blood and goo into a basin. A man coughs deeply in several scenes and spits up blood in a few of these scenes (we see the blood on his hand, mouth and clothing). We see abrasions on a man’s back and shoulders. A dog urinates on a robot’s leg (we see the urine stream). A man’s nose bleeds and drips on the floor. A man seems to be feverish in several scenes.

– A man drinks a glass of whiskey in a couple of scenes.

– Humanity is doomed by its own self-centeredness, but artificial life may possess more empathy. 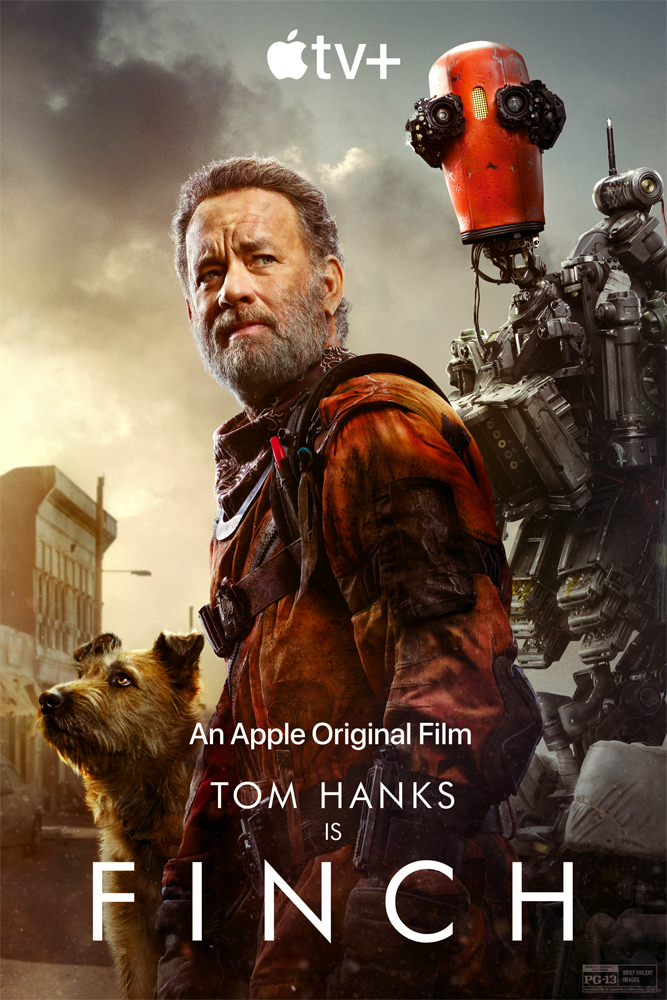