Based on a true story about the relentless rivalry in the 1970s between two Formula One racecar stars, Britain's James Hunt (Chris Hemsworth) and Austria's Niki Lauda (Daniel Bruhl). The drivers risk everything in their open cockpits to win the 1976 World Championship. Also with Olivia Wilde, Natalie Dormer, Alexandra Maria Lara and Tom Wlaschiha. Some scenes feature dialogue in German and Italian with English subtitles. Directed by Ron Howard. [2:03]

SEX/NUDITY 8 - A man at a medical clinic has sex with a nurse: we see his bare chest as we see the woman from the back when he sits her on an exam table and she leans back toward the camera (the scene becomes blurry and sex is implied); the camera then cuts to a short shower scene in which we see the man's bare back as he leans into a woman who has her back against the wall (we see her bare breasts) and he thrusts, her eyes roll, and the scene ends.
► On an airplane a man sees a newspaper headline in which he is quoted as saying: "Marriage didn't suit my lifestyle" and we then see him in the airplane bathroom having sex with a stewardess while staring at himself in the mirror; she is shown leaning back on the sink while he is shown thrusting and we see one of her bare ankles, part of her bare abdomen and hear her grunt (he appears to be fully clothed). A man is seen in a couple of scenes under a sheet in bed, covered to the waist, but is shirtless and we see his bare chest; beside him in these scenes is an unknown woman and we see her hair, one arm and one lower leg sticking out from the covers (sex is implied).
► A man and a woman marry in a civil ceremony and honeymoon at a hotel: in the pool at night they both wear only Speedo bottoms and we see the woman's breasts as they kiss briefly once. A nude man and a nude woman walk away from the camera in a bedroom scene (bare buttocks are seen). After winning a world racing championship, a driver is shown in a montage in which we see three or four changing scenes at once on a split screen while he is with different women. We catch glimpses of women's bare backs, a bare thigh and leg, a bare buttock and thigh, and a pair of bare breasts and nipples. At a race in Brazil, we see close-ups of women's bodies dancing in Carnivale costumes: we see a close-up of a jeweled bra and cleavage; an abdomen and very short jeweled shirt; a jeweled bra, abdomen and cleavage; the camera pans back and we see three women dancing between cars wearing jeweled bikinis and feathers (we see bare backs, cleavage, abdomens, partial buttocks and thighs). Two female models wear very low-cut bodices on long dresses that reveal cleavage; one of them wears a jersey floor-length halter dress that bares her back while revealing a little cleavage. A woman wears a long nightgown that reveals cleavage; her husband is shown wearing a long bathrobe that reveals some hair in the middle of his chest. Women wear miniskirts reaching to mid-thigh in several racing event scenes. Some women wear deeply cut blouses that reveal cleavage. Women wear blouses that reveal bare abdomens and lower backs as well as cleavage. Several women wear short raincoats that reveal most of their thighs. Several scenes show women spectators wearing short shorts. A few male spectators are seen shirtless.
► A man and a woman kiss briefly at home and for much longer while dancing in a club. A man kisses another man on the mouth for accomplishing a good business deal and the second man looks stunned.
► A man stares at the buttocks of a receptionist as she turns away from her desk. A racer's manager states that condom companies do not make good sponsors and he shows him a mock-up logo patch (on a round white background we see a red arm making a muscle, and the letters SEX over the top of the bicep).
► A racer marries a famous model soon after they meet and soon after newspaper headlines report that the wife is having an affair with a famous actor and when the racer asks her to come back to him she refuses and says that he is not serious about relationships. A woman had been living, unmarried, with an older man, but we see her carrying a suitcase-duffel away from the house and she tells another man that she is leaving for good.
► A man remarks to a woman that men love cars more than they love women. A man remarks to a male friend that a woman and another man had sex for at least 24 hours and the woman would probably never be satisfied with another lover. A man tells newspaper reporters, "My wife has found a new backer... I mean lover.'"

SUBSTANCE USE - We see a hand straighten a line of cocaine using a razor blade. A man opens a bottle of champagne and sprays onlookers after car races, men and women drink from bottles of beer and glasses of champagne and wines at parties and cookouts and they also smoke cigarettes in these scenes, men and women are drinking wine as well as beer and whiskey in three restaurant-club scenes and some of the men and women in each scene also smoke, a man pours whiskey into a glass and drinks it in an all-male meeting, a man sits at a desk and drinks whiskey while smoking a cigar, a racecar driver begins to drink frequently in many outdoor and indoor scenes showing him drinking whiskey from a glass, a half dozen morning hotel bedroom scenes show a long table on top of which are two or three half-filled glasses of wine and an empty wine bottle, a man is shown drinking beer from bottles and smoking cigarettes, and a driver tells reporters that he intends to get drunk after winning a race. A man smokes cigarettes in a dozen indoor and outdoor scenes, a man has both a lighted cigar and a lighted cigarette in an ashtray at a table and smokes the cigarette, a racecar announcers' booth contains three ashtrays full of lighted cigarettes and we see smoke rising (no one is shown smoking), two auto mechanics smoke cigarettes together in their garage in three scenes, several men and women smoke cigarettes in two restaurants and outside at a track during a racing event, an older man smokes a cigar in his study at home, and a driver's manager tells him that cigarette companies are not appropriate sponsors (but Marlboro becomes their sponsor).

MESSAGE - Determination can help you win, but winning a prize is not worth your life. 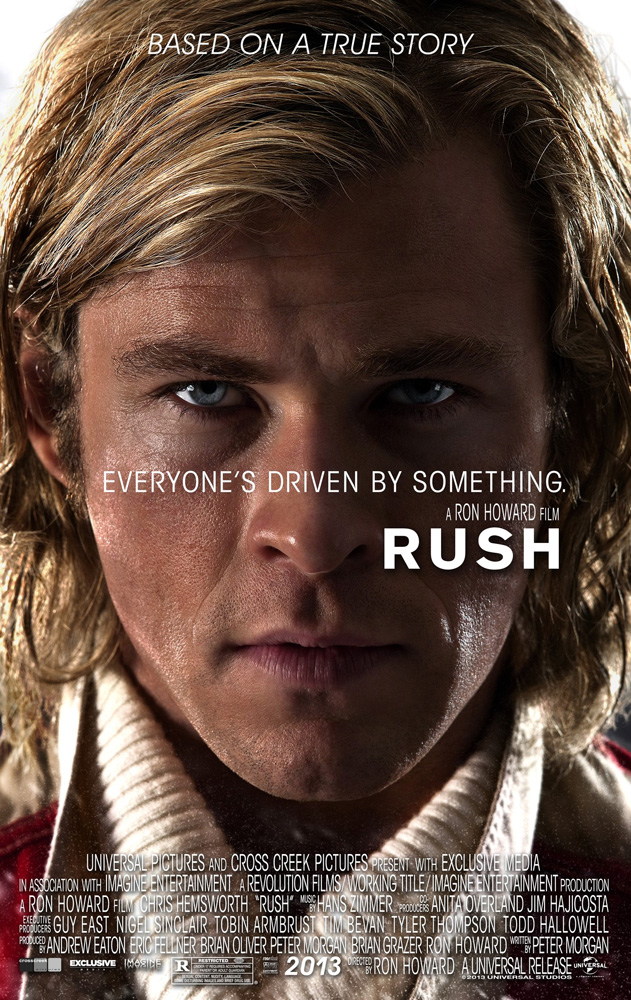