Po (the voice of Jack Black) is a slow moving, clumsy, good-natured, wise-cracking, chubby, Kung-Fu loving panda. His dreams are dominated by Kung-Fu adventures, and when an accidental encounter takes him away from his family's noodle restaurant and he ends up under the instruction of a martial arts master he must prove that he can protect the village from an evil snow leopard. Also with the voices of Angelina Jolie, Dustin Hoffman, Jackie Chan, Lucy Liu, James Hong and Michael Clarke Duncan. Directed by Mark Osborne and John Stevenson. [1:28]

SEX/NUDITY 1 - A female animal bats her eyelashes and swoons over a male animal, which remarks that he always gets that kind of attention. A male animal's pants start to fall down slightly, and he is shown pulling them back up over his bottom (we do not see his bare bottom).
► A male animal gets hit in the crotch, the animal yells, grabs his crotch and says, "My tenders!" Two bowls get stuck to an animal's chest like a bra and other animals snicker at the sight.

VIOLENCE/GORE 3 - Several animals gang up and try to fight another animal, martial arts style: they fight and there is a lot of kicking, and animals appear to be getting knocked out.
► An animal fights with his father figure and is shown striking him almost to unconsciousness (the animal is seen flopping around, and we later see he is OK).
► After a fight, we see bodies of wounded animals falling into water and they appear to be unconscious; there is no blood and it is not clear whether they would have drowned.
► Thousands of arrows are shot at an animal, and many other animals try to fight him; also, a bridge is destroyed, stalactites are rigged with bombs that set off and huge stalactites fall, but the intended victim is unhurt.
► Animals fight on a suspension bridge that is partially destroyed, there are several near falls and animals get stuck in the ropes of the bridge and at one point an animal appears to have been killed or injured -- we later see that he is al right.
► Animals get "nerve attacked" and appear to be dead or stunned; they are revived and one animal punches another when he awakens.
► An animal steps on another animal's tail on purpose, then taunts him and laughs. An animal slams his hand down on a table in a challenge to another animal. A Chinese star weapon is thrown at a picture of an animal.
► An animal is thought to be dying (he is just sleeping). An animal is kicked through a door and down a huge flight of stairs, we hear him hitting the stairs and yelling "ouch" and "oh" (later we see him OK again). An animal falls, hitting the ground hard; he appears to be knocked out and later confused but quickly recovers. An animal is knocked out and wakes up later unhurt.
► Scary images of a villain are shown: we see his eyes glowing in the dark, and we see evidence of his power and his martial arts skills: we see him lifting huge boulders on chains, and he's also able to strike and paralyze his adversaries with a nerve block. There is a scene of scary thunder and lightning as the villain approaches. Animal guards are intimidating and mean, and they scare a bird. An animal worries about protecting a village, worrying that the villain will "lay waste" to it.
► An animal dies of old age: he is shown turning into flower petals and going up to the sky. An animal prepares to fight 10,000 "demons." There is talk of crossbows being aimed at a prisoner that will be used if he tries to escape.
► An animal uses a special Kung Fu hold to make another animal disappear in what appears to be a sound wave or sonic boom -- we don't see the animal disappear, we just see the ripple effect of what appears to be an explosion.
► An animal is shown getting acupuncture and is shown being stuck with needles; he says "ouch" repeatedly as other animals that are helping try to get it right; later the animal passes out and a friend says, "I think I may have stopped his heart" (he is fine later). An animal gets hit in the crotch, yells, grabs his crotch and says, "My tenders!" A teacher discussing martial arts training talks about "bloody knuckles and broken bones."
► Martial arts students attack their teacher for practice, and he fights back as a part of training. A teacher (sensei) repeatedly hits a student with his staff as a training tool, and other training courses include an inflatable foe that will hit back if pushed, wooden, metal-studded, and spinning opponents (an animal gets trapped in one and is heard getting struck and saying "ouch." A training tool includes a floor of fire -- an animal unsuccessfully tries to navigate it, he is burned and we see singed fur and black soot all over him, but he appears to be otherwise unhurt.
► An animal fights with his fists in flames (he doesn't appear to be hurt). An animal repeatedly throws a sharp cleaver, nothing is hit, but we hear the thumping sounds. There are lots of prat falls and slapstick comedy: an animal falls out of bed and onto the floor while dreaming. An animal falls down a flight of stairs. An animal is shown sitting on another's head (the scene is played for laughs). An animal is hit with a bat, is shown making a face like he's in pain, but then recovers. An animal falls to the ground and cracks the ground (he is unhurt). An animal is struck and flies high into the air, and then hits the ground very hard creating a deep hole (he appears to be dazed). A bird runs into a pole, falls to the ground and loses some feathers -- he is OK but dazed. An animal trying to see a show is repeatedly thwarted and falls several times, runs into a building, is hit by a tree, etc. (he says ouch and appears to be hurt but quickly recovers). An animal falls off the ceiling and is unhurt.
► An animal accidentally puts his tail in someone's soup (restaurant patrons are disgusted).
► An animal destroys a kitchen while looking for food.

MESSAGE - Believe in yourself and you can do anything. Ordinary people (or pandas) can become unlikely heroes when they have the support of their friends. 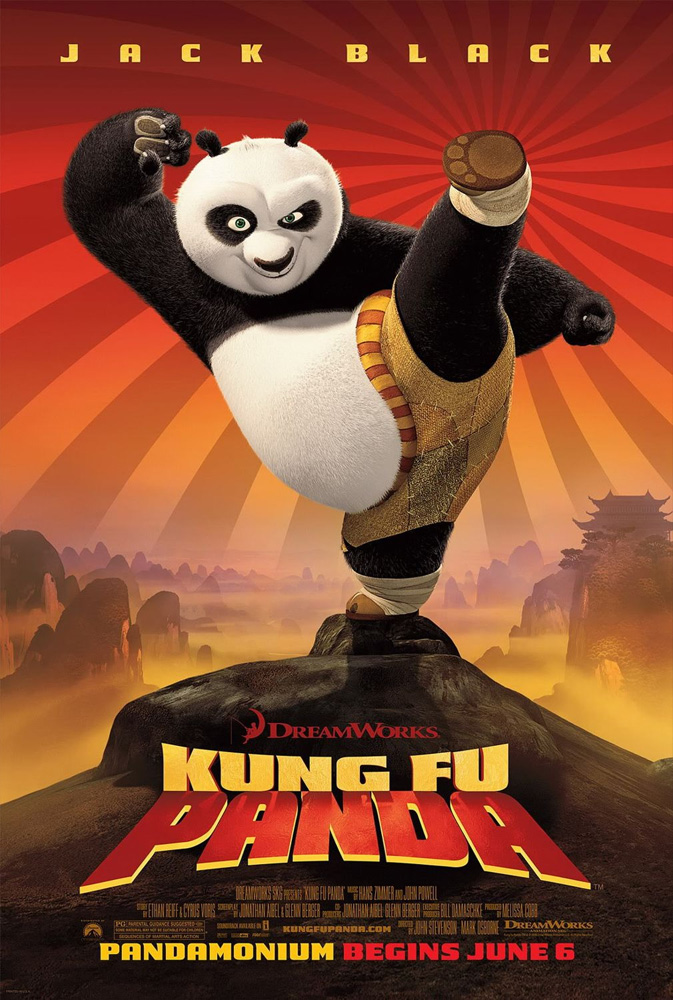