Agent Hardy (John Travolta), an ex-Ranger turned DEA agent is called to interrogate the two men who made it out alive after a Ranger training exercise went terribly wrong. The exercise was led by a hard-nosed commander (Samuel L. Jackson) who took six Rangers into the jungles of Panama during a hurricane. Also with Connie Nielsen, Harry Connick Jr. and Taye Diggs. [1:35]

SEX/NUDITY 5 - A man flirts with a woman in a few scenes, making sexual remarks and suggestions. A woman licks a man's cheek. Women call to a man on a balcony inviting him to come and dance with them. A man talks about being gay and being in the military. A topless woman dances in a street carnival (we see her bare breasts). A man showers (we see his bare shoulders) and wraps a towel around his waist (he's bare to the waist). Another man is bare-chested. A woman's shirt hangs open exposing part of her bra and breast. A man scratches his crotch.

VIOLENCE/GORE 8 - A trickle of blood comes out of a man's ear and then he vomits copious amounts of blood; and we see blood dripping from his arm and hand. A man shoots a man in the head (we see blood on his forehead and a spray of blood when he is hit). A man is shot repeatedly, he yells and falls back. A man is stabbed in the abdomen (we see him bloody), another man is held with a knife to his throat, a woman is shot in the back repeatedly, gunfire is exchanged inside a shelter and a man is shot in the leg. A man is shot 2-3 times, and is knocked back and out of his chair. A man holds a gun toward another man who knocks his hand, the gun fires and shoots yet another man (we see blood spray). A man fires an automatic weapon and bullets spray hitting a woman and two men (one man is wounded and the others are killed). A man lies dead on the ground, smoldering, after having been hit by a white phosphorus grenade. A man lies dead on the ground in a puddle of blood with a bloody bullet hole in his head. A man is shot repeatedly in the back. A man carrying a wounded man over his shoulders runs through thick jungle while being shot at by another man, the first man shoots back and kills him (we see this scene several times). A man fires a gun in the air, grabs a man and shoves him toward a spinning propeller. We see a man in an operating room with blood on a leg wound and the surgeons talk about him having a "bleeder." A woman hits a man hard in the face with a phone book; he is knocked back off his chair and his nose bleeds. A woman shoves a man through a door, kicks him to the floor, he gets up and grabs her around the neck. A woman pulls a gun and threatens a man with it. A man lunges at a man knocking him down and a woman hits him in the head with a gun. A woman shoves and punches a man. Rangers rush through thick jungle firing their weapons at wooden targets. A group of Rangers trudge through thick jungle during a heavy downpour carrying very heavy packs (they seem to be struggling); one man holds onto a rope while dangling over a cliff while being quizzed. The roof of a shelter blows in on people inside. A helicopter with six Rangers and their commander flies through heavy rain and wind at night and they drop to the ground from cables. A woman goes into a dark building, draws her gun and approaches a man. A man talks about white people hanging African-Americans on a whim. A man talks about having been threatened by another man, by saying he'd "...slice him from stem to stern." We hear about the large numbers of people who died while building the Panama Canal and the "inventive" ways used to dispose of the bodies. A man points his finger (in the shape of a gun) at another man. A woman yells at a man and pounds on a table. People dance and parade in a street carnival wearing scary costumes (animals with large pointed teeth, skeletal faces, etc.).

MESSAGE - Nothing is what it seems initially. 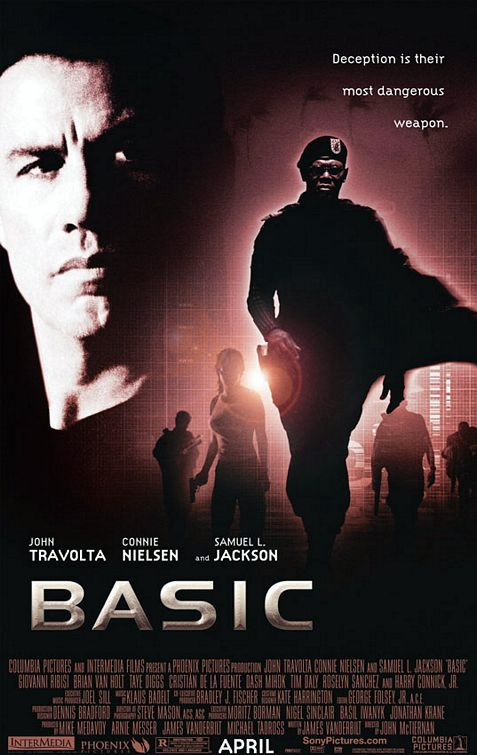