Christopher Walken stars as the mysterious leader of an organized crime family, who also happens to be a fan of extreme ping-pong. He therefore organizes a competition pitting the best ping-pong players in the world in sudden death matches, where "death" is meant literally. In order to catch him dealing arms, the F.B.I. recruits a former ping-pong champion who has not competed since his father was brutally murdered when he was a young boy. Also with Dan Fogler, George Lopez, Maggie Q and Thomas Lennon. Directed by Robert Ben Garant. [1:30]

SEX/NUDITY 4 - There is an ongoing gag about many men who are held prisoner and forced to become sex slaves: A woman offers a man "courtesans of pleasure," and offers a man a choice, describing them as experts in "sensual and erotic arts"; these men then enter the room. In a related scene we hear a squeaking bed from a neighboring room, a man says, "someone's getting lucky," and another man (he is blind) coos after a night of sexual pleasure (not knowing that he apparently had had sex with another man).
► A man and a woman kiss in a few scenes. Several men crowd around a man and try to kiss him (we see a couple of kisses on the cheek). A woman kisses a man on the cheek a couple of times. A man and a woman hug, they kiss and she is shown with her legs wrapped around his waist.
► A man leaves another man's room in the morning and others outside the room assume that they had sex the night before (one says they did not).
► A man squeezes a woman's clothed buttock. A singing and dancing sequence features men and women dancing together, and a woman sticks her tongue out suggestively toward a long pole she carries with her. A man licks a small trophy suggestively while taunting another man.
► A man talks about a prostitute and that she "laughs at you when you are naked" and that "she is the only one that I can afford." A man tells another man that he had sex with his mother. A man tells another man that he practices ping-pong in front of a mirror "in the nude." A woman watching a champion ping-pong player, who happens to be a young boy, calls out to him and says, "I love you." A man watching a woman play ping-pong makes a crude sexual remark. A woman playing ping-pong with a man says, "watch your balls, not my boobs." A woman says that men tell her "give me a hand with my balls" while playing ping-pong.
► Two men apparently have tracking devices inserted into their rectums (we see them walking with an awkward gate).
► A woman wears low-cut and short outfits throughout the movie, which reveal cleavage, her bare abdomen, bare thighs and a small amount of her buttocks. A woman wears low-cut and skin tight outfits that reveal cleavage in several scenes. Two women wearing showgirl costumes that reveal cleavage, bare abdomens and bare thighs stand on a stage with a man. A woman's dress is slit up the side to the hip and reveals her bare thigh and hip. A man is shown bare-chested, a man pulls off his pants and is wearing a skin-tight, spandex outfit underneath, and a man pulls off his pants and falls on the floor (he has shorts on underneath). We see several men wearing sumo belts that reveal bare chests and buttocks.
► A clothed man makes his pectoral muscles move up and down.

VIOLENCE/GORE 5 - Several men are poisoned by a dart that is shot into their necks (we see them become stiff and collapse to the floor and see their bodies dragged away on a blanket). A dart is shot at a man, and he deflects it with a ping-pong paddle, propelling it at a woman and striking her in the head (she falls to the floor dead).
► A man wearing a vest that administers electric shocks is shocked, he falls off a bridge into water, the water glows and we see his body twitch and float face down.
► A man is pushed into an elevator shaft (we hear him yell, and we hear a thud). A blind man stumbles and falls into an elevator shaft (we hear that he is injured but not dead).
► A man breaks a man's arm by slamming it in a bathroom door (we hear a crack and the man yells in pain).
► A man and a woman fight, after he has squeezed her buttock, using punches and kicks; the woman then fights three more men until they all submit. A man and woman fight, she punches and kicks him repeatedly and pulls out two handfuls of his hair. A woman shoves a man against a wall and pushes a coat rack against his throat (he gags and turns red and she lets him go). A woman slams a man in the crotch with a ping-pong paddle (he moans). A young girl punches a man in the crotch twice (he falls to the floor moaning).
► A man is grabbed and dragged away by two men, one holds a long knife and we then read newspaper headlines about the man having been murdered. A man is struck repeatedly in the head by a ping-pong ball, he collapses and we hear that he died of a heart attack.
► A man shoots a gun in the air in a crowded room and other men begin firing their guns (we do not see anyone get struck). Men shoot at a helicopter in mid-air (it is not struck). A man wakes up yelling and another man shoots his gun at him several times hitting the headboard and scaring the man. A man with a gun threatens another man in a few scenes. A man accidentally shoots a gun into the ceiling and is grabbed by two other men.
► Two men wear wired vests that shock if a ball is not returned during a ping-pong match, and one man is shocked with increasing intensity (we hear the hum of electricity and he winces).
► A man dangles from a bridge over a river and then pulls himself back up. A man is carried into an alley and thrown into a garbage dumpster, and one of the assailants blows his nose into several dollar bills, throws them at the victim and spits on him.
► A man is locked into a meat locker with a carton of bees and a fly swatter: he swats frantically as they sting him and we see him with welts on his face later.
► A building explodes, we see flames and smoke and people running out screaming.
► A man breaks through a paper window and slams into iron bars on the other side and he falls back onto the floor. A blind man slams into a wooden beam and falls back onto the floor (he's OK). A man falls to the floor while trying to hit fast moving ping-pong serves.
► A man watching a woman play ping-pong makes a crude sexual remark and her uncle pinches the man's crotch with chopsticks (we hear a crunch, the man winces and after he is let go the man with the chopsticks continues to eat with them). A man with chopsticks sticks them up another man's nostrils, and then continues using them to eat.
► We see a room filled with weapons that are being prepared for sale. We see several urns apparently filled with the ashes of opponents who lost ping-pong matches.
► A man squishes a cricket in his hand, then wipes it on a place mat (we hear the squishing and see goo). A man shakes a box containing a cricket and another man looks inside the box and reports that it is dead. A man spits on a set of dog tags and throws them on the floor.
► Two men apparently have tracking devices inserted into their rectums (we see them walking with an awkward gate).
► There are several ping-pong matches shown where people play aggressively, angrily slamming the ball hard and perspiring heavily. Several men scream loudly when they are afraid in a couple of scenes.
► A boy crashes through a barrier and falls to the floor striking his head and he seems dazed. A man pulls off his pants and falls on the floor.
► A man starts a tournament with a speech about the matches being "sudden death." We hear that a man murdered another man and a woman. A man describes a vest that is wired to give electric shocks when a volley is not returned. We hear that a man's mother died when he was young.
► A man has many tattoos on his chest and arms. A man spits on a boy's hand. A boy sticks chewed chewing gum under a ping-pong table, and then a man does the same thing several more times.

MESSAGE - You have to confront painful memories to overcome their effects. 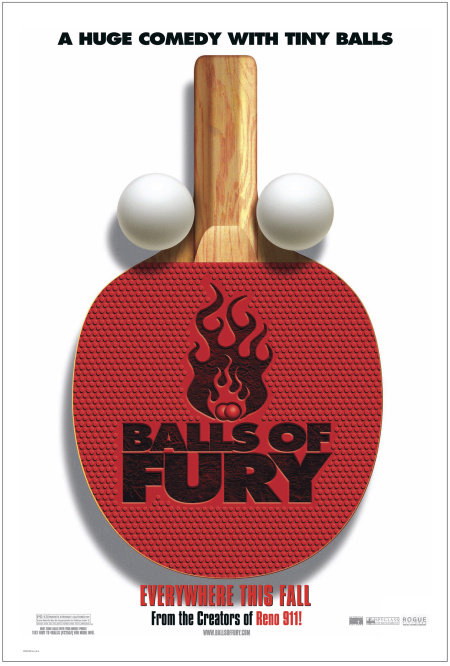