SEX/NUDITY 3 - A man and woman kiss passionately, a man and woman kiss romantically a few times, and a man and woman kiss briefly in a few scenes. There are references to men taking women (prostitutes) "upstairs" (presumably for sex). We see a saloon with women wearing cleavage revealing dresses. A bare-chested man and a woman in her underclothes go into the ocean, hold each other close and kiss passionately. A woman climbs into bed with a seemingly unconscious man. We see a woman in her underclothes a few times. A man flirts with a woman in several scenes. We see two bare-chested men. There is a reference to a man having had sex with another man.

VIOLENCE/GORE 6 - We see several men being picked off one at a time, several men are shot at close range, a man is winged in the face leaving a bloody scratch, a man is shot in the chest, a man is shot in the back and we see him die from his injuries, and a man is shot in the hands. A man rides through a group of armed soldiers shooting at them as they return fire. A group of men on horseback are ambushed by armed soldiers; there's a big battle that includes cannon fire, and several men on both sides are killed (we see some of the hits and some bloody bullet wounds). A group of men on horseback charge an armed army regiment and they fight with guns, bayonets and hand-to-hand. We see men thrown through the air after a cannon is fired at them. A group of men are fired upon by another group of men; one man is shot in the chest and a man falls from a water tower after being shot. A group of men on horseback fire on a train filled with armed soldiers; several men are hit. A group of men on horseback chased and fired on by other men on horseback. A man swings from a chain along the outside of a train shooting men inside. A man running along the roof of a train is shot at from inside the train. We see a man hanging in the street from a distance and we in a close-up we see his blue-tinged hands tied behind his back. A farm house explodes and a woman emerges charred and dies, a crate of ammunition is shot and it explodes, a barn explodes, a construction supply depot explodes. A bank is blown up, a hotel and a store are blown up and a water tower tips onto the roof of a store washing a group of men into the street. A group of men are pinned down by cannon and Gatling gun fire. There are several scenes of bank robberies, all with people being threatened by a group of men with guns. Two men fight, throwing each other through a glass window and rolling around in a mud-covered street; they then draw their guns. A man tackles another man and draws his gun. A man with his hands tied behind his back is marched to the gallows and a noose is placed around his neck. A man is kicked in the crotch and is head-butted. We see a man with bloody bandages on his chest, and a man shows a scar from a bullet wound. A man is knocked down by a running horse, and a man jumps through a glass window. A man hits two men repeatedly with his cane. Horses stampede a town and people run screaming through the streets, and a man is shackled and handcuffed inside a train car. There are many scenes of men threatening other men and women with guns drawn, and there are lots of threats of hangings, threats of killing and physical harm. A train nearly runs into a cart supposedly filled with barrels of TNT, and a train is hit by cannon fire and is forced off the tracks. A young man vomits after drinking whiskey (we hear him but do not see him). There is a discussion of a man having killed two men, and a description of how a man died in the war. A man spits in a man's face.

DISCUSSION TOPICS - The American Civil War, Jesse James and his gang, fame vs. infamy, greed, farmers vs. the railroad, being a hero, progress, the press. 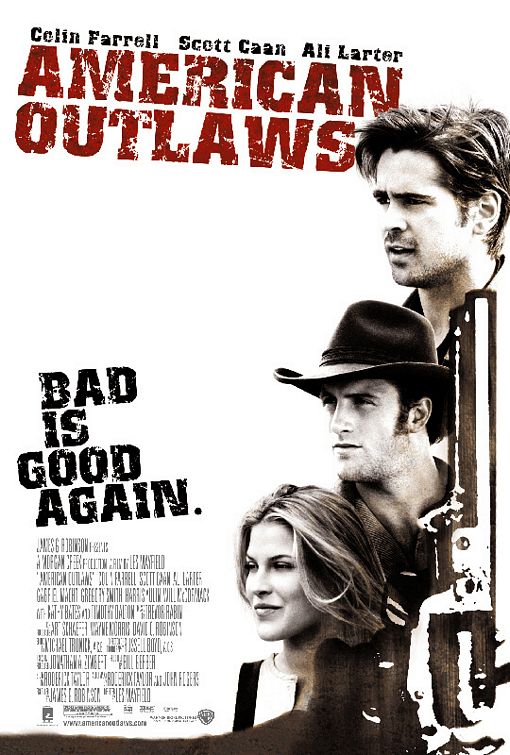