This Woody Allen movie is a series of vignettes that all take place in Rome: from a young architect's (Jesse Eisenberg) adventures, to a touring American's (Alison Pill) whirlwind engagement to a Roman and to a newly married Italian couple (Alessandro Tiberi and Alessandra Mastronardi), we see their stories intertwine. Also with Alec Baldwin, Woody Allen, Lynn Swanson, Judy Davis, Flavio Parenti, and Roberto Benigni. [1:42]

SEX/NUDITY 6 - A man tells a woman that they cannot have sex in the home he shares with his girlfriend, and the woman then suggests they have sex in a car; we see a car shaking back and forth and it is implied that they are having sex in the car (no nudity is visible).
► A woman and a man are seen in bed together (the woman is wearing a slip and the man is wearing a shirt); the woman makes a sexual remark to the man about never having "made love" to a criminal and they kiss passionately and sex is implied.
► A man asks a young woman if they could kiss, they kiss passionately, the man asks the woman to sleep with him, and the young woman thinks about it, saying out loud that she would "tell her grandchildren" that she had sex with the man; we see the man take off his pants (he is wearing boxers) and the woman take off her dress (she is wearing a slip), preparing to have sex.
► Sex is implied between a woman and a young man: the young man pulls on his underwear (he is wearing a long shirt and no nudity is visible) and the woman pulls on her underwear (no nudity is visible and she is wearing a short dress) while the woman makes a remark about them having sex. A man and a woman are seen together in bed; the man is shirtless and we see his arms wrapped around the woman (previous sex is implied), a woman walks into the building and the woman in bed tells the man that the new woman has come to have sex with the man.
► A young man wearing a shirt and boxers acts embarrassed when a woman sees him and panics when someone knocks on the door; the young man and the woman (who is wearing a tight, cleavage exposing dress) climb into bed and appear to be kissing as several older men and women open the door and walk in. On several occasions through the movie we see men and women kissing. A woman kisses a man on the cheek.
► A woman wearing a short, tight, cleavage-exposing dress throws herself on a bed and tells a man that she is there to "fulfill his desires" (implying that she is a prostitute); the young man panics and throws his hands in the air. On several occasions we see a man in the shower and his bare chest and a portion of his bare back are shown. A man walks onto a stage with a towel wrapped around his waist, and he enters a shower stall and takes off the towel; nudity is implied but the frosted glass of the shower door covers his crotch. We see a man being wheeled onto a stage in a shower stall, frosted glass covers his crotch, his bare chest and back are visible and the man showers in front of crowds of people on several occasions, performing a portion of an opera while showering. We see women in a fashion show wearing very tight clothing.
► A woman explains, using graphic terms, how she had a sexual relationship with a woman that started when she went into a dressing room, she disrobed in front of her and they began to kiss passionately; the woman adds, "It was like being in an erotic dream." A woman makes a series of sexual comments to a man about her sexual history. A woman tells a young man that she was paid to "make love" to him. Several men ask a woman to come to their offices or homes, implying that the woman is a prostitute and one of the men mentions that the woman should wear a "thong." A woman asks a man if he had had sex with another man, and the woman then explains that she had previously had sex with a woman. A man tells a woman that he was a virgin before he was married, but that his wife had not been a virgin. A woman teases a man, saying that she had seen his wife "smooching" with another man and that a man had "made love" to the man's wife "with his eyes." A young woman tells a man that he is the "sexiest man in film." A woman remarks that a young woman has "sexual tension."


VIOLENCE/GORE 3 - A man rushes out of a bathroom, holding a woman at gunpoint, and he shouts at another man, holding them now both at gunpoint; he instructs them to give him their jewelry when he is interrupted by a knock on the door, and the robbery is stopped -- we see the gunman get into bed with the woman to throw off a group of angry people who enter the room (no one is harmed).
► A woman grabs a knife and points it at an older man, shouting angrily, the man grabs an older woman (his wife) and shoves her in front of him as a shield and the woman puts down the knife and calms down. As part of a play, we see a man stab another man and a woman in the stomach and we see fake blood on a stage knife.
► An older man acts slightly disgusted when a man shakes his hand and then remarks that he had not had time to "clean up" (it is implied the older man thinks the man has been embalming bodies). An older man is very nervous because of turbulence in an airplane, and he holds an older woman's hand and expresses how nervous he is about the turbulence. A man tips over a chair and falls to the ground (he is unharmed). A woman grabs a man's shoulder to calm herself. We hear a car crash in the distance and a man shouts.
► On multiple occasions we see a man shouting angrily at photographers as they cluster around him. A man shouts angrily at photographers while shoving his way through a crowd of them. A man panics and he tells a woman that he is going to "jump out the window." A reporter exaggerates a non-specific comment from a man into "an apocalyptic loss of life." A man tells a woman that he had gone to school with a boy that was killed by lightning. A man jokingly reads aloud a play review that states that a man should be "beheaded." A woman jokes with a man, saying that he will have a heart attack from stress. An older man makes a crude joke to a woman about how he will be drooling and have a colostomy bag.
► A man spits wine into a glass as he tastes it.

SUBSTANCE USE - A woman tells a group of people that her father "was a drug dealer" and her mother was a shoplifter, and a woman remarks that a man does drugs. A woman jokes that she had one drink and three sleeping pills, and throughout the movie we see men and women drinking wine.

MESSAGE - Italy is a very beautiful country with people entangled in love affairs. 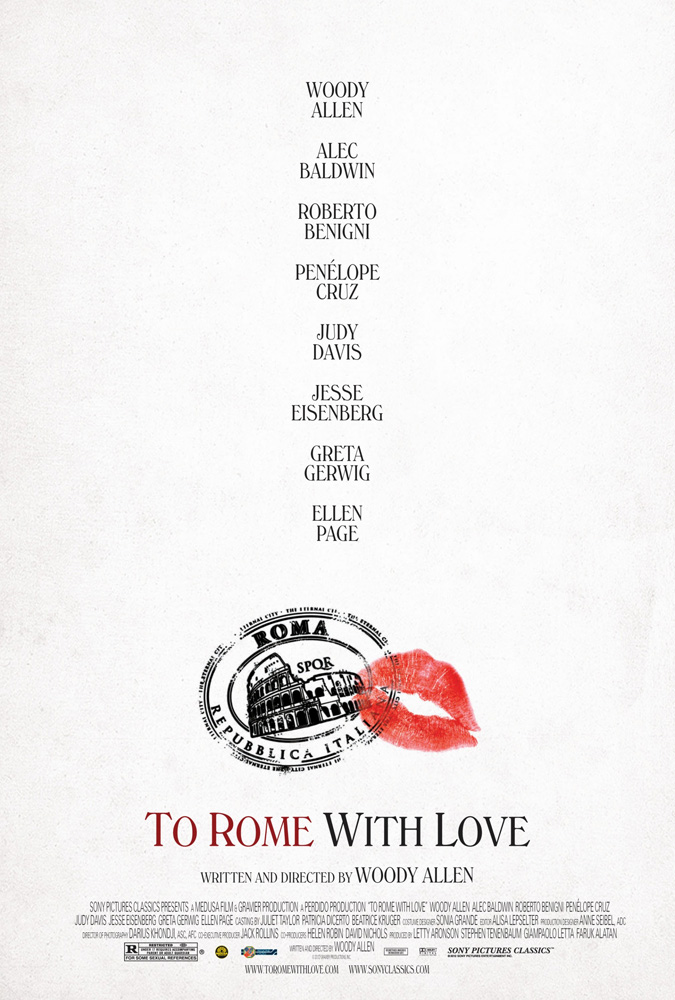