A prequel to the 2003 and 2005 "Underworld" films, which traces the origins of the Lycans and the war between them and vampires: While the Lycans serve as slaves to the aristocratic vampires, the daughter (Rhona Mitra) of the ruthless vampire leader (Bill Nighy) falls in love with a Lycan (Michael Shee) and thus the hostilities begin. Also with Shane Brolly, Kevin Grevioux, Steven MacKintosh, David Aston, Elizabeth Hawthorne and Craig Parker. Directed by Patrick Tatopoulos. [1:32]

SEX/NUDITY 6 - A female vampire and a male Lycan (half-human and half-werewolf, with the power to transform from one to the other) kiss passionately, he removes her coat (we see their bare shoulders, backs and his bare chest), and they have sex: we see flesh, kissing and caressing and we see them lying together, and he lies back, she straddles him (we see his bare chest and abdomen and her bare back and legs) and we see a flashback to this scene later.
► We see a nude man (bare back and buttocks and legs) in a couple of scenes when he transforms from werewolf to human. We see a nude male infant (his penis and testicles are visible). Female vampires wear very low-cut tops that reveal cleavage, bare abdomens, shoulders and backs. We see a completely charred vampire body and the outline of the breasts are visible.
► A female vampire and a male Lycan kiss and embrace in a few scenes.

VIOLENCE/GORE 9 - Throughout the movie we see Lycans (half-human and half-werewolf, with the power to transform from one to the other), werewolves (large, vicious animals with large teeth and no human tendencies) and vampires (pale skin and eyes and sharp canine teeth); when Lycans transform into werewolves we hear them growl and roar, and hear crunching and moaning and we see fur and claws and teeth grow.
► Many werewolves charge a castle, many are shot with spears and arrows, we see vampires being attacked and bitten by the werewolves, and werewolves are slashed and cut and speared (blood spurts and sprays).
► Humans and vampires are attacked by werewolves in a dark forest, and we see werewolves being stabbed and slashed and beheaded (blood and tissue spurt and spray); a werewolf is cut in half at the waist and falls to the ground with blood spurting, a werewolf is stabbed through the head, vampires are attacked and bitten (blood spurts and sprays and we see blood on attacking werewolves), a human is pulled out of a carriage and blood spurts on the humans still inside the carriage, and a Lycan is struck in the back by two arrows and falls to the ground (we hear a crunch when the arrows are pulled out later). A Lycan attacks a vampire, bites his face, ear and throat (we see blood on the Lycan and later on the dead body).
► A voiceover tells of a young Lycan being "forced to feed on humans," we see the Lycan in a cell as he transforms from human to werewolf, humans are lined up against a wall and we hear growling and crunching (we do not see blood).
► A rider on horseback charges through a dark forest, werewolves chase and attack, and the rider slashes the werewolves cutting heads off and running them through (we hear crunching and see heads lopped off with blood spurting and spraying).
► Several werewolves are shot and killed by arrows and spears fired from a castle (we see blood splatter and hear groans). Several men are struck and pinned against a wall by spears fired from a castle wall (we see the men struck, blood spurts and we hear crunches), two are struck in the chest together, one is struck through the head and many others are trapped by a blockade formed by many spears.
► A vampire is slashed on the throat (blood spurts and sprays) and we hear another being killed (we hear a slash and a groan) and two more are killed with a slash and spurt of blood. A vampire is stabbed through the mouth and through the back of the head (we see blood on his mouth and down his chin and we hear gurgling). A werewolf is shot and killed by a vampire with a crossbow (he then holds the crossbow on an infant lying on the ground).
► A Lycan is chained by his arms and feet to a wooden frame and he is whipped by a vampire, with long strands with hooks at the end (we see wounds open in his back, we see blood pour, he cries out and we see him unconscious later with blood and open wounds on his back). A vampire is chained to a beam, the roof of the room is opened letting sunlight in, and the vampire sizzles and is charred (we see the body completely charred later). Two vampires are pushed out of a window and they sizzle and disintegrate when they are exposed to the sunlight.
► A vampire bites another vampire on the neck (we see blood on the neck and on the mouth of the biter). We hear growling and screaming as men are taken to a room where werewolves are chained and we see the men being bitten on the necks (presumably to be infected).
► A human yells at a vampire, and the vampire picks him up and throws him into a cement pillar that breaks and falls on him (the human lies dead on the floor with a large bloody wound on his head and we see him later being dragged through a pool of his blood). Piles of werewolf bodies are set on fire. A vampire drinks from a goblet of blood. We see slaves doing hard labor and one is whipped on the back repeatedly (we see his bloody back).
► A Lycan with a sword fights several vampires: we see blood spurt and hear crunching and slashing, and the Lycan is surrounded and held with many arrows held to his throat. Two vampires fight with swords, and one strikes the other in the face and holds her at sword point. Men fight with guards as they try to break out of their prison cells. Two men fight with punches and slamming each other against the bars of a cell. A vampire holds a knife to the throat of another vampire.
► A Lycan walks into a werewolf den and is surrounded by werewolves. Explosives are dropped into a tunnel causing flames to burst and spread, trapping a Lycan and a vampire.
► In an underground cell we see people wrapped in chains and hanging from walls (they are motionless and it's not clear if they are dead or alive). Slaves are forced to wear a spiked collar (with spikes pointing in, toward the throat). A man with a sword threatens a Lycan.

SUBSTANCE USE - A vampire drinks from a goblet of blood.

MESSAGE - Even werewolves want to be free. 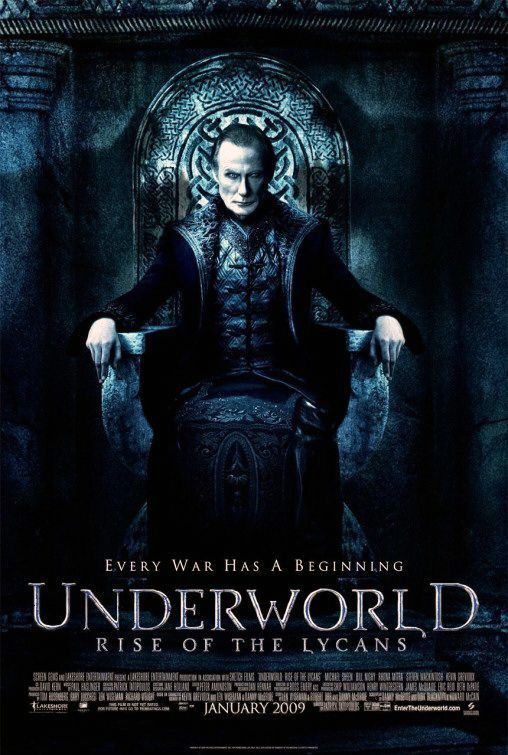