SEX/NUDITY 1 - Talk about conception -- who fathered a particular character in the film.

VIOLENCE/GORE 5 - There's very little blood or gore but several fights with humans and aliens getting killed. A human is sliced in half by a light-sabre (below frame) and his body falls backwards down a very high vertical shaft, separating into two halves as it tumbles over and down (no blood or gore). A human is impaled by a light-sabre and dies (the light-sabre pokes all the way through the character's chest and out of his back; no blood or gore, but we see the circular burn mark on his clothing after the light-sabre is pulled out). A human's body is incinerated in a funeral pyre (we see only his unscathed body within the flames). Scores of explosions and laser blasts without blood or gore (just lots of debris whizzing by), but several humans die off-screen in explosions. A human is killed when his ship careens out-of-control and crashes into a canyon (we only see the explosion from high above, not the character's death). Another human is killed in battle by a laser blast to his back (no blood or gore). Two humans are trapped in a chamber and threatened with death by poisonous gas and suffocation (they survive). Sea monsters (they resemble giant piranhas and crocodiles) nearly swallow a transport with people in it but instead eat each other (one creature is cut in half and then swallowed by a bigger one). A few smallish amphibian creatures are eaten as food; two are torn apart as they're being consumed (no blood or gore). There are several laser-gun fights, a massive ground assault with thousands of remote-control robots versus a race of amphibian creatures and a spaceship battle, each with many instances of violence. Dozens of robots are destroyed with laser blasts and light-sabre cuts and many robots are decapitated. A small alien creature is plucked off a high platform, presumably to its death (off-screen). A character's groin is injured on two occasions; once from a robot's kick, the other from his dropping on a horizontal pole. A character is stunned and his tongue is temporarily numbed and hangs out of his mouth (the scene is played for laughs). A small robot is sucked into a pod's engine intake, ground up a bit, and ejected out the exhaust, in working condition. During a pod race, there are several high-impact vehicular crashes, with metal debris whirling and twirling everywhere, though no one is actually shown being injured; also, several pod racers are shot at by mischievous onlookers (again, no one is injured). A character steps in a mound of manure and an alien creature flatulates in another character's face.

LANGUAGE 1 - Two mild scatological references (in both cases, the actual words are spoken in an alien dialect, but the inflection is obvious).

MESSAGE - Put your trust in your feelings and instincts, not logic; a unifying Force joins all creatures. Good and evil co-exist.

(Note: Parents who adhere to conventional religious beliefs may be upset by the explicit theology of the film: All living things share symbiotic microscopic organisms that unify life in the universe; they apparently constitute The Force. The more of these organisms a creature has, the stronger The Force is with him/her/it. Said Force is amoral, i.e. it has a good and an evil side. There are also references in the film to a Messiah and insinuations of a virgin birth.) 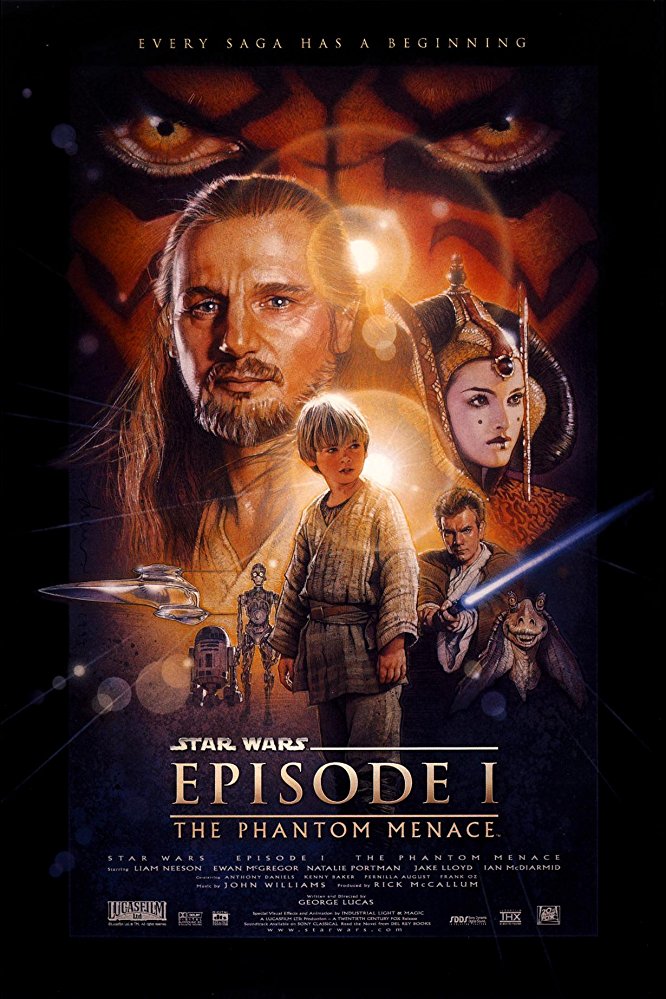