When a space probe is sucked into a wormhole and communication is lost, two astronaut chimpanzees and a circus chimpanzee with a stellar pedigree (his grandfather was the first simian astronaut) are sent to the stars to find out what happened. With the voices of Andy Samberg, Cheryl Hines, Patrick Warburton, Jeff Daniels, Kristin Chenoweth, Kath Soucie, Stanley Tucci and Zach Shada. Directed by Kirk de Micco. [1:21]

VIOLENCE/GORE 2 - We see a large blob-like creature with many pointed teeth, it chases three characters, one is stuck on the creature's long tongue but is pulled free, and another is eaten (we see a glow in the creature's stomach and we are later told that the character passed through the creature and we see that it is OK).
► Large worm-like creatures shoot out of an alien planet and snap at chimpanzees, and other flying aliens chase them while shooting spears and darts at them. What looks like vines turn out to have beak-like mouths that snap at two chimpanzees.
► A chimpanzee is struck in the buttock by a dart (it pulls it out and is OK). A chimpanzee is thrown off the back of a rocket as it tries to land, and we see it lying motionless on the ground (it's OK). Two chimpanzees jump off a cliff, one lands on a soft mushroom cap and the other lands hard on the ground (no injuries). Two chimpanzees sink into what behaves like quicksand, one ends up sinking below the surface before the other grabs onto a vine and can pull them both up. A chimpanzee is grabbed with a mechanical claw and held over a freezing liquid a couple of times as a threat.
► As punishment many aliens are dunked into a freezing liquid that hardens and leaves them as statues.
► Two chimpanzees fall through a cloud and to the ground below. Two flying aliens shoot darts at another alien that is in a large metal machine. An alien is grabbed by a mechanical claw, plunked onto a platform and examined by a machine. A chimpanzee is shot out of a cannon during a circus performance, flies through a flock of geese, soars a great distance up, plummets down toward the ground, crashes through the top of a tent and lands hard on a set of drums (this happens a couple of times and he is unharmed). A chimpanzee misdirects his flight pack, crashes into several rockets standing on display, and they tip over and crash to the ground.
► A rocket is sucked into a wormhole, it is tossed around, and two of the three chimpanzees on board are rendered unconscious, while the other struggles to steer the rocket (this happens twice). A space probe is pulled into a wormhole, it is thrown around as it passes through and crashes onto a planet where aliens stand and watch.
► There is a threat of a volcano exploding on an alien planet throughout the movie. When a volcano erupts the freezing liquid it expels nearly overflows a tall wall and pours onto the planet's population.
► An alien talks about the "valley of very bad things" and "cave of flesh-eating beast." Aliens yell "death to strangers" when they attack chimpanzees. A man says that chimpanzees should be used for animal testing. A man yells at people in several scenes. A chimpanzee screams when a rocket blasts off. A chimpanzee says, "It ain't over 'til the bearded lady shaves her back."

MESSAGE - Living in the shadow of expectations can keep you from doing things. 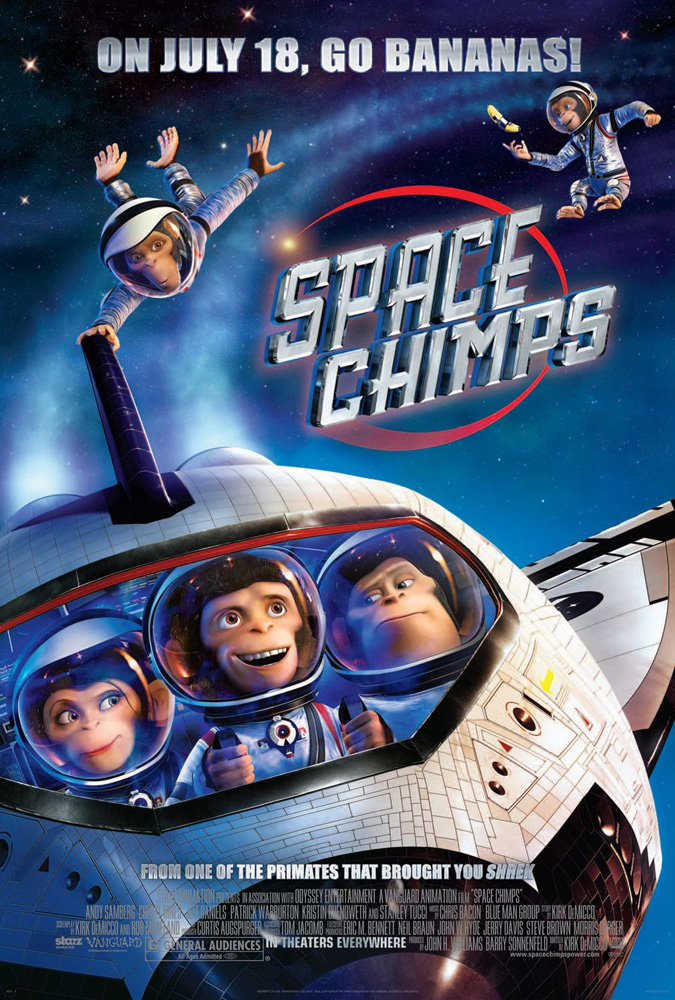