Naval adventure taking place during the Napoleonic wars, based on Patrick O'Brian's books: British captain Lucky Jack Aubrey (Russell Crowe) got his name from being lucky at outmaneuvering his opponents in any situation. His current orders are to sail his vessel, The Surprise, across the seas, to seek, intercept and capture French ships. The ship's doctor (Paul Bettany) serves as the captain's confidant and conscience. Also with Ian Mercer, James D'Arcy and John Desantis. Directed by Peter Weir. [2:20]

SEX/NUDITY 3 - A man looks at a woman admiringly, and other men on a ship call out to women who are apparently interested in keeping them company. We see a man in his shirt, with no pants and his bare legs are exposed. Many men (sailors) are seen bare-chested in many scenes. Indigenous men from islands wear loin cloth-type clothing with bare chests, and the women wear dresses that are off the shoulder.

VIOLENCE/GORE 6 - A boy is prepped for surgery: he is held down, a stick is put in his mouth, a tourniquet is wrapped around his arm and his arm is amputated (we hear the blade cutting, we see the boy's face as he grimaces and tears come from his eyes), and we see the boy recovering later with his arm wrapped in bandages. A man operates on a man's head; a hole is opened in the man's skull (we see a bloody hole) and a coin is presumably implanted in his head (while operating the surgeon turns to many men who are watching, points to a spot in the hole and says "those are his brains"). Two ships fight side-by-side with cannon fire ripping through their hulls and across their decks: a mast splits and falls, men fall overboard, and men are hit by shards and splinters. Men board a ship with weapons drawn, they are attacked by men with guns, some men are hit, others shot at close range, and others are slashed with swords. A man lunges at another man and stabs him in the side, we see a floor soaked with blood and a man lies dead on a table with bloody wounds. Another man is shown dead with bloody wounds on his chest, another dead man has a bullet hole in his forehead, and many dead bodies are stitched into their hammocks and buried at sea. A ship is pummeled by cannon fire, men are thrown back by the blasts, we see bloody wounds, some men are treated by a doctor (the floor is slick with blood), masts and sails collapse, men dangle from ropes, and a boy has shards of wood sticking out of his arm -- we hear that 9 men die and 27 are wounded in this encounter. A man is shot in the stomach: we see the bloody wound, hear that the bullet took some of his shirt with it and it is lodged inside his abdomen and could become infected if it is not removed, and watch as the man operates on himself (we see the incision in the reflection of a mirror held for his benefit, he says they must raise his rib, another man assists by doing so, the man moans, and we see the man's hands covered in blood). A man commits suicide by jumping overboard while holding a cannon ball. A man is tied to a pole and flogged while other men watch (we see cuts in his skin open after the blows). A mast breaks in half, a young man who had been on the mast loses his grip and both he and the mast land in the water (the young man is lost). A man is terrified after one man is flogged because of him. A man shoves another man. Men suffer from wind and sweltering heat as they lay adrift at sea. A man dissects a fish and we see slime and organs. A large storm makes the sea very rough, with large waves tossing a ship around and throwing water across its decks. A boy sails in a small raft and cannon fire lands near him. Two men argue bitterly. A ship fires cannon at another ship after shadowing it for a long time. A boy talks about dead bodies being stitched into their hammocks and that the last stitch goes through the nose to make sure they are really dead. Two men stand at the top of a high mast, and men dangle from one side of a ship to help balance her. We hear that the oceans are battlefields during the time of the Napoleonic wars. Men vomit when a ship sails through very rough water. A man has a scar on his ear. Two weevils crawl off and around a piece of bread.

SUBSTANCE USE - People are shown smoking cigarettes and drinking alcohol. Men are shown making alcohol in a still.

MESSAGE - If you are strong and lead, respect (and luck) will follow. 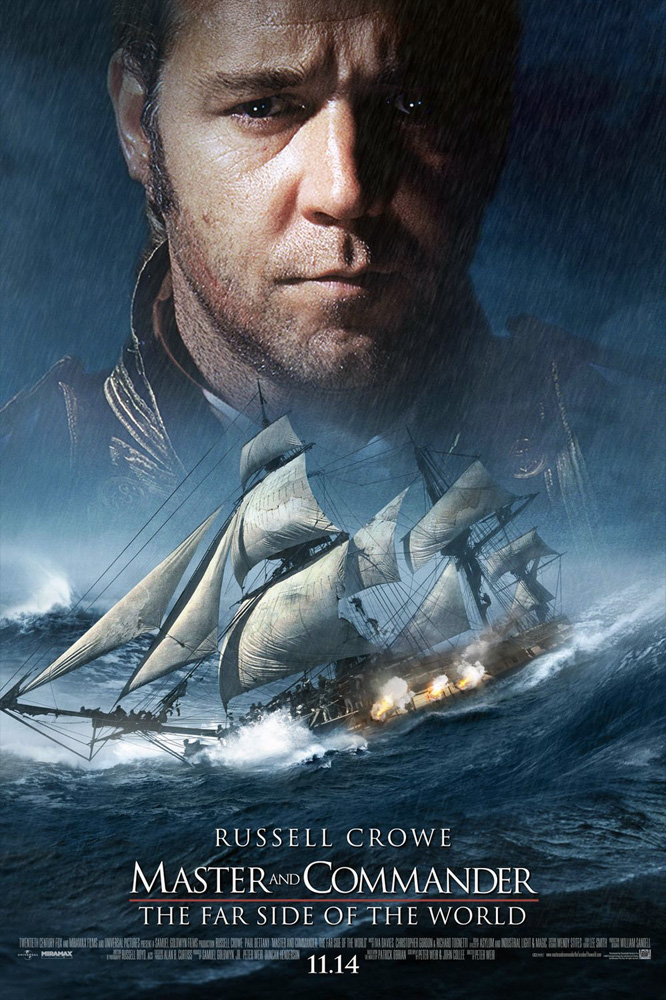