Spy spoof with Rowan Atkinson as accident-prone MI-7 agent Johnny English, who takes on a Machiavellian French business magnate (John Malkovich) after all of the other secret agents have been killed. Helping English protect the British monarchy are Ben Miller as his sidekick and recording artist Natalie Imbruglia as his object of affection. Also with Kevin McNally. Directed by Peter Howitt. [1:28]

SEX/NUDITY 3 - A man and a woman lean close to each other to kiss, and a man steps close to a woman as if to kiss her. A woman holds a man's hands tenderly. A man spills a drink on a woman's chest, then puts his head on her chest, and a man touches a woman's buttocks and she screams. A man's underwear is pulled down and we linger on his bare buttocks. Women wear outfits that reveal cleavage, bare abdomens and lower backs, bare legs and shoulders. A man bends over and his underwear slips down revealing his buttock cleavage. We see a man in his boxers and tank T-shirt in several scenes: in one scene he dances comically thrusting his hips forward a few times (a bulge is evident in his shorts). Men and women also dance. A man says, presumably in Japanese, and translated in subtitles: "May all your daughters be born with three bottoms." Innuendo includes: A woman talks to a man about "things she'd like to do to and with him," and she says "you've made love to lots of women...," and talks about a "hunger."

VIOLENCE/GORE 4 - Two men are shot at, they shoot back, a gas canister is thrown into the room and the bad guys escape in a car. Two men are shot at by men with automatic weapons. A bomb explodes in the background of a scene and we hear that many people were killed. We hear that a man was "...killed in action." A man and a woman fight with kicks and punches; the woman is shoved into a wall, falls to the floor, grabs the man's gun and shoves him into the wall knocking him unconscious. A man swings from a rope and is shot at a few times, and he falls from the rope landing on a man and knocking him to the floor. A man is grabbed by the ankles and falls to the floor (we see him later with a very bloody nose). A man is hit on the head with a bottle (he falls to the floor unconscious and we see a large bruise on his face), two men are hit in the head with a fire extinguisher canister, and a man is hit on the back of the head with a gun. A woman is accidentally shot by a dart (or bullet, it's unclear) and falls unconscious on the floor (we see her being taken away on a stretcher and later in a wheelchair). A group of armed men force their way into a residence, with guns drawn, and threaten a woman and her dog. A man and a woman are surrounded by armed men. A man shoves and yells at a man. Two men parachute from a plane and land on a rooftop. A women is launched into the air by an ejector seat (we hear her scream). A rocket is launched and hits a traffic camera on a street causing an explosion. People are held at gunpoint and threatened with guns in many scenes: A man is held with a gun to the back of his head, he twists around and pokes the man with the gun in the neck with a syringe ring and the man falls to the floor unconscious; and a man is held by two men with guns, he pulls the guns together and uses them to knock the men out. In another scene, two men are poked by a syringe ring and they flop on the floor unable to control their movements. People drive recklessly in a few scenes: Two men in a tow truck (with a car on the back) chase two other men in a hearse; they swerve though narrow streets and traffic, one man climbs out of the truck and into the car, the car is lifted off the tow truck bed and swung out over the street, it is lowered and nearly run into by oncoming traffic, it swings back and forth, and is eventually dropped onto a trailer where it reverses off and back into traffic. A man pulls hard on another man's ears and nose. A man nearly falls into a large hole in the floor, a man climbs down a hole in the floor and gets stuck, and another man falls into the hole, hits the man who is stuck and they both fall down to the bottom. An uncomfortable scene shows a man dancing on a coffin at a funeral and making remarks about it all being a show. Two guard dogs bark viciously at a man. A woman tries to hit a man a few times but she is blocked. A man is hit in the face by a door, and a man bangs his head on a pipe. A man's neck tie is caught in a conveyor belt; he is dragged along by the neck, knocking people off their chairs and onto the floor. A man pretends to be fighting a man behind a door; we hear things breaking, hear blows and thuds and he emerges with ketchup on his face, thus looking as if he's covered in blood. A man spills a drink on a woman's chest, he puts his head on her chest, and she screams and hits him. A man climbs up through a pipe that turns out to be a toilet drain; a group of men use the toilets above, a chain is pulled to flush and waste washes over the man in the pipe, he pops his head up through one of the seats and he is covered with goo (another man pops his head up through a seat later). A man pulls the trigger of his gun and feces sputters out of it. A man eats a piece of sea urchin, gags and spits it out. A man drops a glass that breaks and breaks the stem off another. A man says "...he hasn't urinated on anyone yet, has he?", a woman says sea urchins "eat through their bottoms." People gather at the Tower of London and references are made to its history as a prison.

MESSAGE - It is not beyond the bounds of possibility that even the most inept British spy can thwart a Frenchman's plans for world domination. 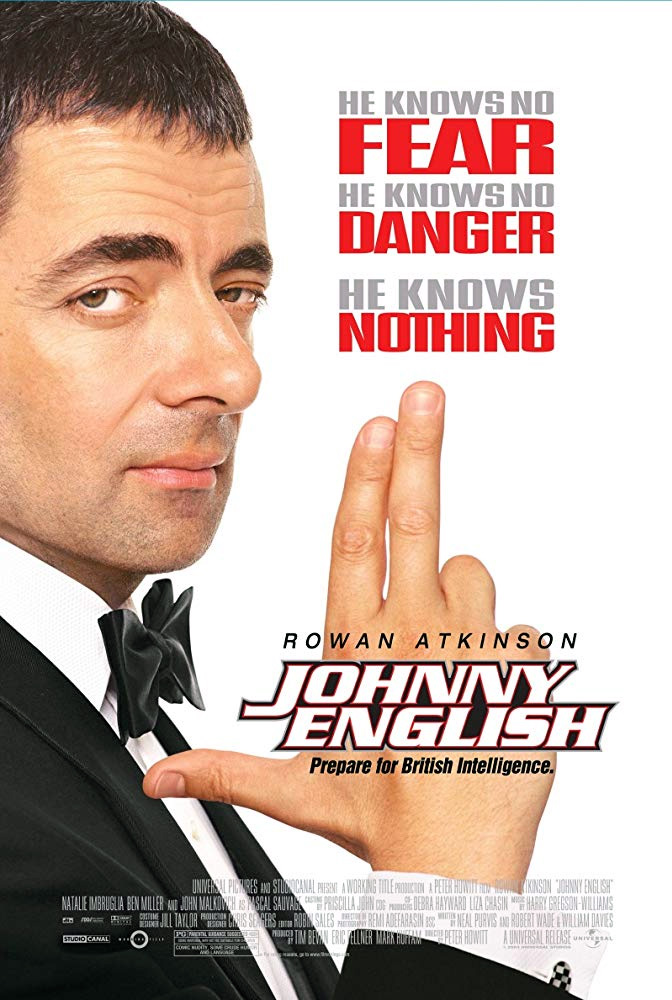