Two women travel to an isolated farmhouse in Southern France to spend a weekend with the family of one of them. But just as they are getting settled, the family is brutally murdered and one of the women is taken away by the killer. The remaining woman hides and struggles to free her friend. With Cecile de France, Maiwenn Le Besco, Maiwenn Nahon, Philippe Nahon and Frank Khalfoun. Directed by Alexandre Aja. [1:25]

SEX/NUDITY 7 - A woman lying on a bed puts her hand in her pants and masturbates in an extended scene (we see her hand moving rhythmically and hear her moaning). A truck moves rhythmically and we hear the driver moaning while he masturbates using a woman's severed head (it's not clear exactly how).
► A woman watches another woman showering through a window (we see the woman's bare breasts). Two women kiss.

VIOLENCE/GORE 10 - A badly injured woman stumbles into a room (another woman is hiding in the closet), and she is soaked with blood; a man comes behind her and slashes her throat with a razor, and we see the cut open and gape, blood pours out, and she falls to the floor (we continue to hear slashing and squishing and see blood spraying on the closet door, and we later see that the woman's hands have been cut off).
► A man opens his door late at night and is hit in the head by a man outside: the wounded man stumbles and screams (we see his bloody head wound), he pulls himself up the stairs, and the other man shoves his head through the slats of the railing, and then slams a dresser on his head, ripping it off (we hear him scream and hear a crunch and see the head separate). A man holds a severed head up by the hair and drops it out his truck window (we see the face with blood on its mouth).
► A man hits another man in the chest with an axe, and he falls to the floor; the attacker pushes down on the man's back and forces him harder onto the axe (we hear crunching and blood pools on the floor).
► A man wraps a plastic sheet around a woman's head and holds it, the woman gasps and struggles and falls limp to the ground, and the man traces the woman's body with a razor; he stops at her throat, he sticks his fingers in her mouth, the woman hits him in the head with a stone, he falls over (he has blood on his head), and she beats him repeatedly with a stick wrapped with barbed wire (we see his very battered and bloody face). He grabs her by the throat, but she pushes a plastic sheet against his face, he gasps and gags, and he lies motionless.
► A man with a chainsaw chases a woman through dark woods: the woman runs into a road, she is nearly hit by a car, she pounds on the window of the car, she gets into the car, the man with the saw begins tearing into the windshield of the car and the saw blade hits the driver and blood sprays all around coating the inside of the car and the woman in the backseat (she's screaming); the man with the saw comes around, she pulls herself out of the car (we see a large piece of glass stuck in the back of her bloody heel and she pulls it out), while the man approaches her with the saw and she screams, and then they talk.
► A woman is slashed in the face with a knife and stabbed in the stomach, and a woman is stabbed through the chest with a crowbar, and she falls over on the ground.
► A woman finds the headless body of her husband and she screams, a man with a razor approaches her, and we hear slashing and hear her screaming.
► We see the dead and mutilated bodies of a man (he's missing his head), a woman (she's missing her hands) and a boy (he has a large bloody spot on his back). The dead body of a man with an axe in his chest is discovered.
► A little boy runs out of a house and into a cornfield, a man with a gun follows, we hear two shots and see a flash (we see the boy's body with a bloody gunshot wound later).
► A dog barks angrily at a man, we hear a thud and see the dog fall to the floor with blood on its chest.
► A man goes into a room where a woman sleeps, he holds a razor to her throat, she wakes up and screams, and he pants and moans (nothing else happens at this moment).
► A man in a truck crashes into the back of a car driven by a woman several times, the car speeds up, the truck hits the car again, the car flips over and off the road landing on its roof, and it begins to burn (the woman has a bloody wound on her arm). A woman stumbles through dark woods, and she has blood and a bandage on her arm and a bloody wound on her stomach.
► A man pours alcohol on a bound and gagged woman, he lights a match and threatens to drop it (she squirms and screams). A woman is chained to a bed, she's gagged and she has a bloody nose.
► A man carries a chained and gagged woman over his shoulder and dumps her in the back of a truck (she screams and cries and tries to protest). A woman runs into a dark road and a car swerves nearly hitting her, and she pounds on the window pleading for help (we see that she has a large bloody gash on her forehead). We see a woman's badly scarred back and hear her breathing frantically.
► A woman runs through a house trying to get out, and she hides in a closet when she hears someone approaching. A woman hides in a room, a man with a razor walks through the room looking for her, and she trembles gets out of a car and runs into a dark cornfield, another woman follows looking for her and she panics when she cannot find her.
► A woman is on a swing, in the dark, outside a farmhouse, and we are lead to believe that someone is watching or creeping up on her. A woman yells in frustration while on the telephone with the police.
► A man urinates in a bathroom (we hear a trickle and a flush).

SUBSTANCE USE - Two women smoke, and a man in a car smokes. Two women talk about "partying." A man drinks alcohol from a bottle while driving.

MESSAGE - Love can make you do awful things. 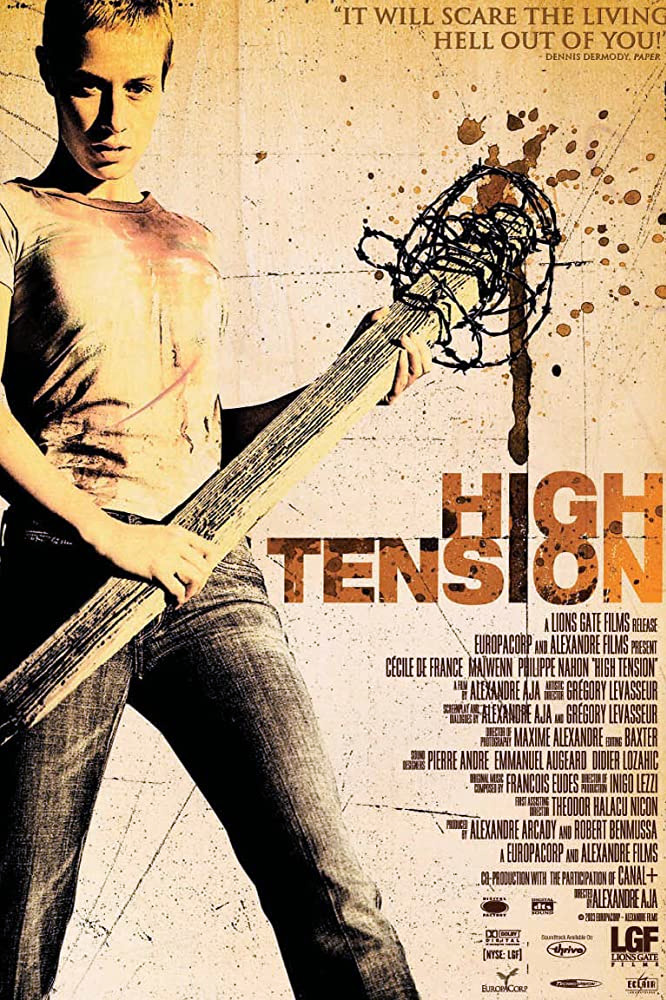