Biopic about A. A. Milne (Domhnall Gleeson), the famous author of children's books, who was inspired by his son (Will Tilston) and his stuffed animals to create the book series set in the magical world of Winnie the Pooh. While the series brought hope and laughter to the English after World War I, it placed undue stress on the family. Also with Margot Robbie, Kelly Macdonald, Phoebe Waller-Bridge, Alex Lawther and Vicki Pepperdine. Directed by Simon Curtis. [1:47]

SEX/NUDITY 2 - A woman lies under covers in a bed with the wide straps on her gown revealing partial shoulders and bare arms as her clothed husband lies on top of her and kisses her for several seconds, and the scene ends (sex is implied). A husband and his wife kiss for several seconds (clothed) and the couple kisses briefly in three additional scenes.
► In a bathtub with high sides we can see the top of a young boy's shoulders as his father puts a soap-bubble beard on him. Five teen boys taunt a first-grade boy, shouting that he looks like a girl several times in one scene (please see the Violence/Gore category for more details; we see several scenes in which the small boy has a pageboy haircut and wears wide blouses that look like girl's clothing).

VIOLENCE/GORE 3 - A man receives a telegram and becomes tearful, as does his wife; he trashes his son's room, hitting things with a cricket bat and throwing things, he takes a cricket ball outdoors and throws it toward the camera lens, where it explodes into a fire ball and we see footage of WWI at night with four dead soldiers lying in mud, and blood on their faces and bodies; men are shot as they run across the screen and we see flashes of light and hear buzzing and bombs exploding in the background as we see dirt and debris shoot up from the ground.
► A six-year-old boy is kicked down a long flight of stairs by five high school boys as they shout and taunt him (we do not see the boy at the bottom of the stairs or hear him land).
► In a flashback, a man opens a telegram as his wife cries and we read that their son is missing in action and presumed dead; the man visits his son's former nanny with the news, and she cries as soon as she sees him.
► We hear a woman screaming bloodcurdling sounds off camera many times for several seconds each time and a nurse is seen carrying a clean baby wrapped in a blanket as the mother cries loudly and tells the nurse to get the husband out of the room; the nurse pushes him out and closes the door.
► A balloon pops, giving a man a flashback to soldiers running and shouting through a nighttime battlefield as explosions kick up dirt in the background; he shouts scaring his young son, then walks off-screen and slams a door hard. A theater spotlight causes a man to have a war time hallucination of a nighttime battlefield with explosions. A man in a forest hears bees buzzing and says he is imagining a battlefield and bombs and planes buzzing, but recovers quickly. A man blows up balloons with another man and a young boy and when one bursts, he startles, but recovers and smiles; the three people laugh and stomp on the balloons, which burst loudly.
► An angry young boy pounds the ends of the handles of his table knife and fork into a dining room table as his father tells him that someone will fall and impale themselves on the utensils and bleed; the boy laughs. A young boy shouts angrily at adults including his mother, his father, his nanny, and a store manager; he also throws his stuffed toys across the room in one of the shouting scenes, and he yells "I hate her" about a woman. A nanny argues with a man and a woman, who are her employers; the couple accuses the woman of betrayal for having a boyfriend. A young boy argues with a woman briefly. A woman argues with her husband for several seconds and leaves their rural home to live in London alone. A young boy runs through his house, shouting for his nanny, upset that she is gone.
► We hear that a zoo bear's mother was shot by a hunter; a young boy is put into the exhibit to have a picture taken with the bear. A young boy written about in a book is taken to a toy store where a crowd of shouting, waving children frighten him. A nanny quits her job and the little boy she worked with cries loudly.
► A man says that he was bullied in army basic training, but no details are given. A woman leaves her screaming, crying baby in a pram beside a staircase at home and stares out a window saying that boys grow up to put on a uniform and go to war. A man says that all of England is cross and having protests. An 18-year-old man joins the army and his mother cries audibly off-screen. At a train station, a soldier argues with his father briefly. When a soldier returns from war, his mother cries as does his former nanny. We hear that a woman's mother is very sick and later that she died.
► A man and a young boy stick fight in a forest and they later use wooden and they shoot several arrows into a tree.

SUBSTANCE USE - Men and women at a party hold and drink from glasses of champagne and tall cocktails and we hear a champagne cork pop loudly once, men and women at a party hold short glasses of unknown alcohol and they receive glasses of champagne that they raise nearly to their lips as the scene ends, men and women hold glasses of wine but do not drink at a gathering, a carafe of brandy is seen on a coffee table, a carafe of brandy is shown on a living table in two scenes, and a woman says that she wants to go to a speakeasy but she does not do so.

MESSAGE - A writer's war experiences and young son inspired a classic children's book series that brought hope to the world. 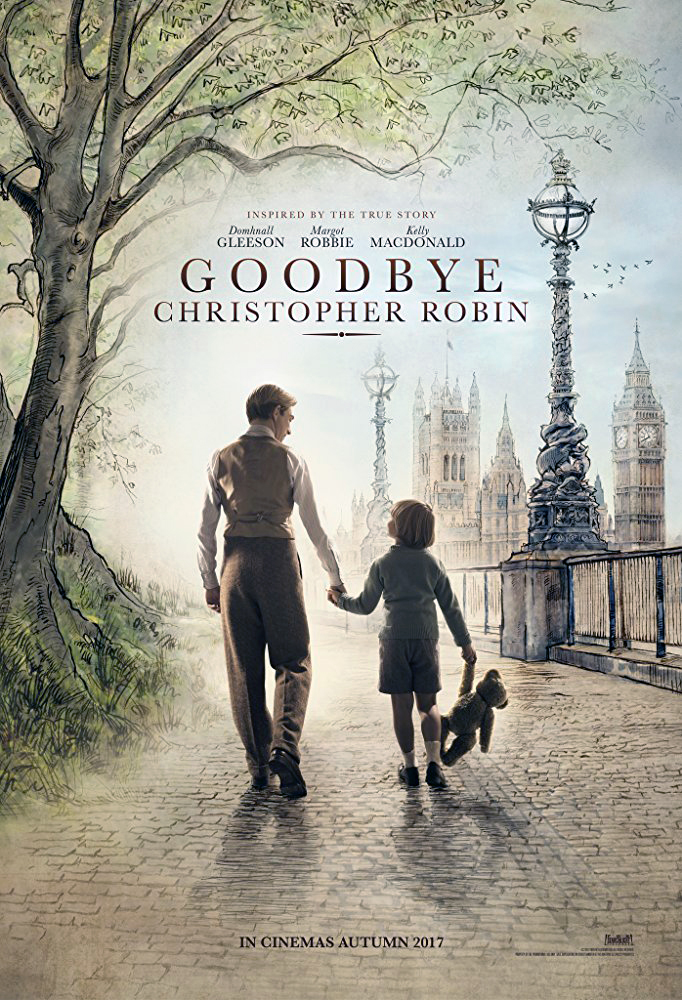