Why is “The Girl in the Spider’s Web: A New Dragon Tattoo Story” rated R? The MPAA rating has been assigned for “violence, language and some sexual content/nudity.” The Kids-In-Mind.com evaluation includes two sex scenes, full female nudity, several references to incest, several scenes with bloody, deadly violence, a couple of scenes of torture, and more than 10 F-words. Read our parents’ guide below for details on sexual content, violence & strong language.”

The Girl in the Spider’s Web SEX/NUDITY 7

– A video is shown of a man having sex with a married woman and we see the man shirtless (his bare chest and abdomen are visible) as he thrusts from behind and she is wearing bra (cleavage and bare abdomen and back are shown) and moaning. A man stands in the hallway of a club outside a bathroom and someone is performing oral sex on him (we see the back of a head covering the man’s genital area).
► A fully nude woman from a distance is seen by two young girls (we see bare breasts, abdomen and the genital area) and as she walks through a hallway we also see her bare back and buttocks. A nude woman soaks in a bathtub and we see her bare knees, shoulders and part of her breast through the milky water. A woman showers and we see her full back through steamed up glass (the outline of her form is evident) and we see her bare back with a large dragon tattoo on it. A woman wears a dress that is deeply cut in the back and reveals her bare back and buttock cleavage (another woman admires her as she walks by). A woman wears a short robe open in the front to reveal bare chest (not breasts), cleavage and abdomen as well as the top of her underwear. A computer generated female form floats through opening credits and cleavage, bare abdomen and legs are visible. Two women wear tank T-shirts and boy shorts or bikini underwear (cleavage and bare legs to the hips are seen) as one sits on an unmade bed (sex is implied). People are shown dancing in a club and wearing variety of outfits that reveal cleavage, bare abdomens, bare backs and legs.
► A man sits on a bed and talks to his two young daughters and invites them to sit on his lap (there’s an evident implication of a sexual relationship); one of the girls does and the other pulls her away and runs to another room where she stands on a balcony and jumps into snow below (she seems to be uninjured as she runs away).
► A man caresses a woman’s face and neck and invites her over that night; she says that she is going to be with her husband. A woman talks about sharing a bedroom with her father for 16 years (incest is implied). A woman T-shirt reads, “Gimme Head ‘Til I’m Dead.”
► Security officials in an airport retrieve an abandoned suitcase and when they open it we see that it is full of sex aids.

The Girl in the Spider's Web VIOLENCE/GORE 7

The Girl in the Spider's Web LANGUAGE 6

The Girl in the Spider's Web SUBSTANCE USE

- A man takes a prescription pill (we think it is an amphetamine), and after having been injected with a sedative a woman snorts a crushed up amphetamine to counteract the effects. A man pours a glass of whisky and hands it to a woman, a man drinks a glass of whisky in an office, a woman drinks vodka in a few scenes, people at a bar drink whisky and glasses of wine, a woman hands a glass of wine to a man and he declines, a woman drinks from a small bottle of liquor, and two glasses of wine are shown on a dining table. A woman lights a cigarette and smokes in an apartment, a woman smokes in a club, two women smoke in an apartment, a woman smokes outside a building, and a man and a woman smoke.

The Girl in the Spider's Web DISCUSSION TOPICS

The Girl in the Spider's Web MESSAGE 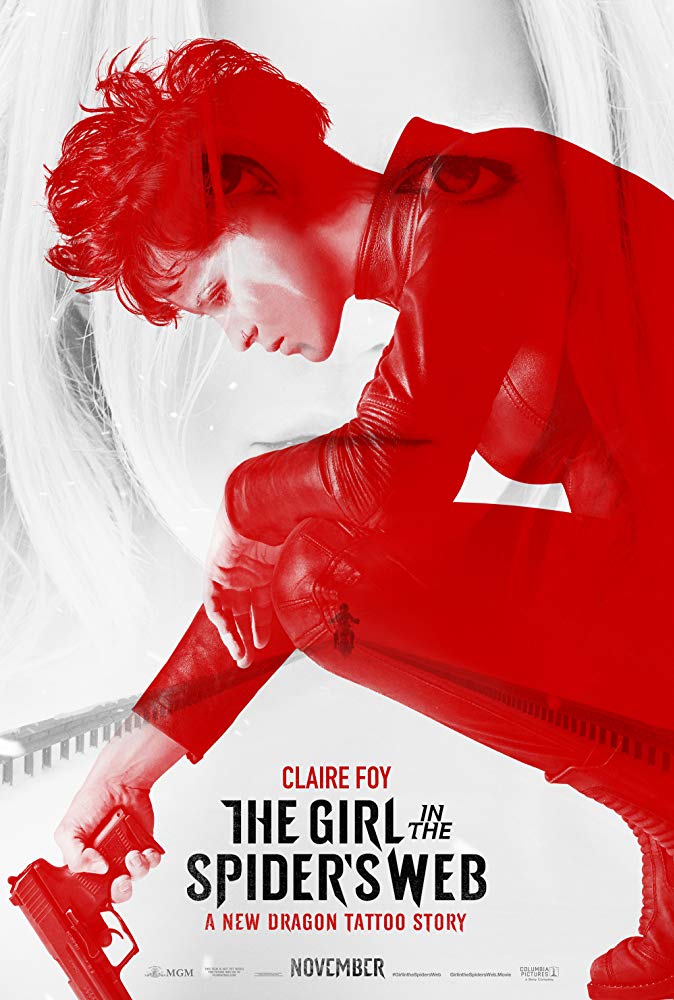