Why is “Enola Holmes 2” rated PG-13? The MPAA rating has been assigned for “some violence and bloody images.” The Kids-In-Mind.com evaluation includes a couple of kissing scenes, the discovery of dead bodies with some bloody wounds, a man dies after a fall, several fight and chase scenes, a few explosions, a jailbreak, many arguments, discussions of poisonings in factories, and some mild language. Read our parents’ guide below for details on sexual content, violence & strong language. In this sequel to Enola Holmes, Sherlock Holmes’ (Henry Cavill) sister (Millie Bobby Brown) opens her own detective agency and elicits both excitement and intrigue. Also with Louis Partridge, Susan Wokoma, Adeel Akhtar, Helena Bonham Carter, David Thewlis and Sharon Duncan-Brewster. Directed by Harry Bradbeer. [Running Time: 2:04]

– A man and a woman dance closely together in a large bathroom and kiss, but are interrupted. A man and a woman declare their love for each other, embrace, and kiss for several seconds. A man sits in a chair and a woman in a long dress sits on his lap and hugs him. A man kisses a woman’s hand.
► A few women at a dance flirt with men by waving fans at them. A man says that men want cheap women, until they want a wife.
► A line of women dancers in a music hall wear frilly no-leg shorts over black hosiery and wiggle their hips as they dance. Many women wear long gowns with square necklines that reveal slight cleavage.

– A woman finds another woman lying on a bed with a long knife sticking out of a pool of blood on her chest; her mouth is bloody and three jars of mostly dead flies are seen on a table and the victim dies after gasping; police officers arrive to question the first woman and let her go. A woman finds a man dead in an armchair, without marks or blood on the body.
► An extended fight scene in a theater includes two pairs of men, one of which swings swords, and the other uses punches, kicks and throws while a woman swings away from a man, using a trapeze, and she falls onto a stage on her face (she is unhurt); a man falls over a ledge to a floor (he’s unhurt), another man is shot in the arm and we see a little blood as he grimaces, a man shoots a mirror to pieces, a man holds a knife to a 10-year-old girl’s throat and releases her when she bites his hand (no blood visible), and a man and a woman fist fight with punches, kicks and throws on a catwalk and they also use knives (it looks like the woman is stabbed but it is a collapsible blade, although the man does nick her temple with another blade and we see a little blood), and she punches the man hard, grabs a rope attached to a sandbag and a large hook, jumps from the catwalk, hooks the man in the groin and he falls to his death (we do not see blood).
► In a chase scene, a horse-drawn wagon is pursued by a police horse-drawn wagon; a woman in the first wagon tosses out two smoke bombs that scare all the horses and cause the police to veer off the road, a man on horseback chases and shoots five times with his rifle disguised as a cane (no one is struck), the woman’s wagon loses its horses (no people or animals are hurt) and turns over on its side; three women and three police officers fight in pairs, using swords, punches, kicks and throws until the women blow up their wagon in large flames and escape.
► A man chokes a woman, a woman chokes another woman, and the second woman chokes the first woman; we hear gasps and yelps, but no one is injured. A woman slaps a man on the arm twice. A woman punches a man in the stomach and in the face twice inside a carriage and they laugh (there’s no blood). A man follows a woman at night, with heavy footsteps and a cane that strikes the pavement loudly, and the woman rushes away safely. A woman blows up a mailbox; no one is hurt. A few women practice long staff self-defense techniques; no one is harmed.
► In a flashback and then the same scene in real time, two policemen chase a woman through crowded streets and a couple of people are knocked out of the way; the woman avoids being struck by a horse cart, she climbs a downspout pipe as a policeman grabs her, and she climbs to the roof and slips off, hanging onto a gutter near a window that she enters and puts on men’s clothing, before leaving the building safely, entering an apartment and falling through a secret door in a wall (a man tells her that she needs to avoid danger). Police officers arrest a woman for murder and a group of women in the prison exercise yard surround her and push her into the middle of their circle, covering their ears as a loud explosion blows out a wall and two women enter and grab the first woman, helping her escape.
► We hear that deaths in a factory were caused by poisoning from white phosphorus (a cheaper material used in place of red phosphorus for match tips); three workers discover the poison and march into the factory one morning, explaining the problem to workers while a man with a cane shouts at all the workers, pounding his cane on tables beside them until one woman grabs the cane, shouts at him, jams the end of it into his throat and 100s of female workers stomp their feet on the concrete floor and the man looks frightened as they march out, on strike, together. A man looks into the mouths of all the female workers at a factory; one woman has a swollen cheek and he roughly pushes her away, shouting, “Out!” and he slams a cane onto several tables where young girls are working, threatening to fire them and fining them for each mistake he sees. We see a small bubbling vat in a factory office and it may be some sort of chemical for matches.
► We hear that a woman is missing and that she worked in a match factory where workers are dying from typhus. A woman starts her own detective agency and men belittle her for it. Two men argue loudly, a man and a woman argue several times, two women argue, a woman is rude to another woman for no reason, and an older man screams at a woman. A woman escapes from prison, according to a newspaper headline.
► A woman blows her nose loudly and later, we hear what sounds like flatulence off-screen. We hear a toilet flush off-screen. A woman sees a rat and yells “Eek,” later finding the rat dead, likely poisoned by white phosphorus.

– A man pours a glass of wine at home and does not drink it, many men and a few women at a music hall hold glasses of cocktails and beer but do not drink, men and women at a ball raise glasses in a toast but we do not see anyone drinking, and a man is thrown out of a music hall and he staggers when he gets up and slurs his words (he appears inebriated). A woman puts a pipe into her mouth but does not smoke, and we see an extinguished cigar in an ashtray.

– The 19th century match-girl protests created the first workers’ strike in England and it was a step toward gaining women’s and workers’ rights. 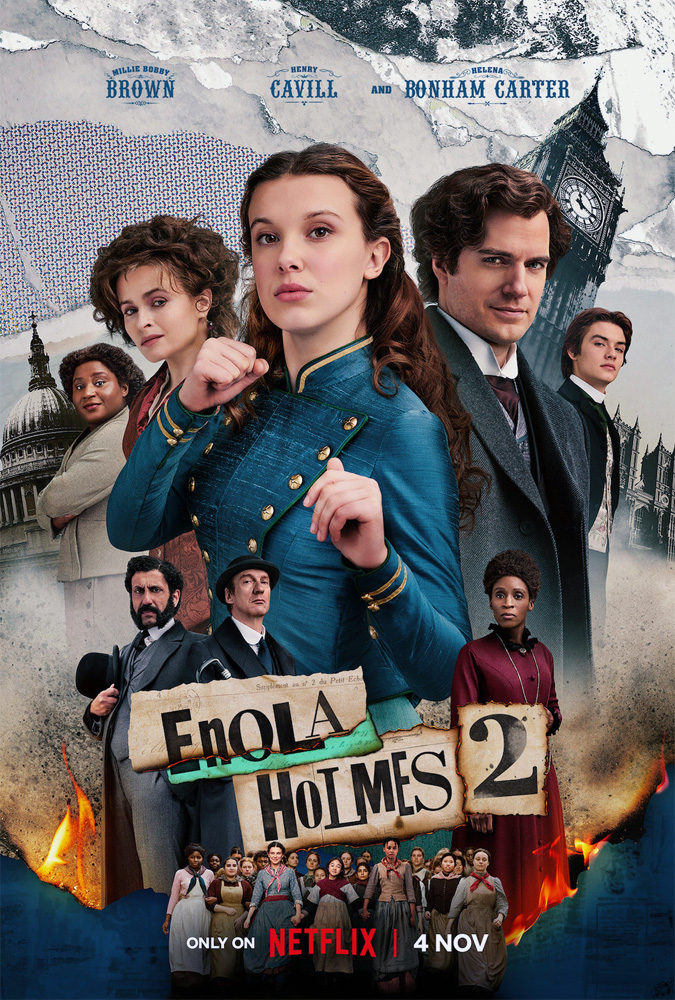