Wesley Snipes stars as a covert United Nations operative framed for murder who has to clear his name, make sure a trade agreement with China is signed, and catch the bad guys too. With Marie Matiko, Anne Archer, Donald Sutherland, Michael Biehn, Cary-Hiroyuki Tagawa and James Hong. [2:00]

SEX/NUDITY 6 - A few instances of sexual innuendo. In one scene a young woman (we're told she's a young teen) seems to perform oral sex on a middle-aged man. The scene is brief and quite murky, but it is obvious that her head is at his crotch moving suggestively. We see several topless women in thongs dancing suggestively, and we glimpse a photo of a topless woman. A woman takes her clothes off, but uses her arms to cover herself; only her legs, shoulders and some cleavage are visible. We see scenes from pornographic movies on several video monitors: the scenes show people moving and moaning, but are not explicit.

VIOLENCE/GORE 7 - There are several martial-arts fights, with punching, kicking, slamming and throwing; furniture and glass panels are demolished in the process. A woman's back and a man's neck are broken in two different scenes. At the end of one fight a man falls back on an upright shard of glass that cuts his throat; we see some blood. One woman is tortured by being rammed into mirrors. We see her very bloody face (no cuts are evident). A man's shoulder is scraped and bleeding. Later, we see him carefully, deliberately opening the stitched, bloody wound with a blade; in a close-up, we see the blade cutting and lifting the skin. There are several gun fights, with machine guns, pistols with silencers, and rifles. Several people are shot, some at close range: A woman is shot execution-style, while she lies on the floor unconscious. A prone man is also shot in the back of the head at point-blank range. Both are shot several times. A wire is wrapped around a woman's throat and she's throttled; we see blood streaming out of the wound while another woman tries to cover it. We see two women who've been shot in the face; bullet wounds and blood are evident. After a fight in a car, several people are bloody, and most are dead. In another scene, a car explodes and rolls over; we see a bloodied, unconscious man inside. Another man shoots him several times. A man dangling from a truck is chased by a car trying to squish him to death between the two speeding vehicles. We see a forklift's prongs stuck through the broken, bloody windshield of a car -- the assumption is that the occupants were killed by running into the forklift. A bullet ricochets, hitting a man in the face; he looks pretty cut-up and bloody. A man is repeatedly shot by cops and we see several bullet wounds on his chest. A woman is shot in the face while sitting in a car; we see a lot of blood splatter the rear window. We also see a bullet hole in a man's forehead. We see many decomposing bodies in a large ship container. The people who opened the container hold their noses. A man ducks under a moving truck. There are several explosions.

MESSAGE - The end may seem to justify the means, until the same means are used for a nefarious end. 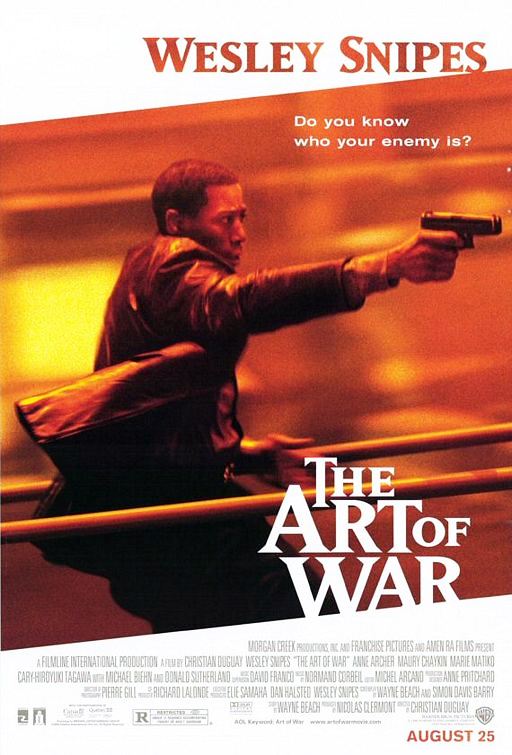