Why is “The Woman in the Window” rated R? The MPAA rating has been assigned for “violence and language.” The Kids-In-Mind.com evaluation includes an implication of infidelity and a reference to sex, a few murders by stabbing and pushing from a roof, death from a car crash, a reference to an attempted suicide, discussions of debilitating phobias, and nearly 10 F-words and other strong language. Read our parents’ guide below for details on sexual content, violence & strong language. A Hitchcockian homage about a Manhattan resident (Amy Adams) suffering from depression and agoraphobia, who is certain she witnessed a murder taking place in the house across the street. When nobody believes her, and there is apparently no evidence, she begins to doubt her overall sanity. Also with Donat Balaj, Anthony Mackie, Fred Hechinger, Wyatt Russell, Gary Oldman, Brian Tyree Henry, Julianne Moore, Jeanine Serralles, Mariah Bozeman, Liza Colón-Zayas, Anna Cameron, Ben Davis, Rand Guerrero and Jennifer Jason Leigh. Directed by Joe Wright. [Running Time: 1:40]

The Woman in the Window SEX/NUDITY 2

– A man refers to having had sex with a woman. It is implied that a married person has been unfaithful.
► A woman takes off her top and we see her wearing a bra and a skirt (cleavage, bare back and abdomen are seen) and she takes off her pantyhose revealing part of her bare leg. A woman sits in a bathtub and we see her bare shoulders and cleavage. A woman wears a nightshirt with and without a robe in many scenes (cleavage and partial bare legs are seen a few times). A woman wears a low-cut shirt that reveals cleavage.

The Woman in the Window VIOLENCE/GORE 6

– An attacker holding a blood-covered knife enters an apartment where a woman hits him in the head with a wine bottle (we see bloody cuts on his face and he yells); the woman runs away and we see a man lying still in a puddle of blood in the hallway and the wounded man grabs the attacker by the foot as he chases the woman, the attacker stabs the wounded man twice more and then chases the woman to the roof where they fight and the woman is stabbed in the face with a gardening fork (we see the tines through her cheek and inside her mouth); the attacker then tackles the woman and pushes her head into a puddle of water, she pushes the attacker onto a skylight and it collapses dropping the attacker several floors and we see him lying dead on the floor.
► We hear a thud in a hallway and understand that a man has been attacked. A woman watches a neighbor in another building and sees what looks like a woman arguing with someone and then being thrown back; we then see the woman with a knife in her abdomen and a very bloody wound as she stumbles forward and then slams against the window screaming and blood smears on the glass. The driver of a car on a snowy road struggles with the passenger over a phone that falls on the floor, and when the driver turns to pick it up, the car drives off the road and we see it overturned and the occupants are shown with bloody wounds; two of them (one is a child) appear to be dead.
► A man grabs a teenage boy and hits him hard in the face. A man yells at a woman and gets very close to her face as she presses back against a wall in fear. A woman wakes up to the sound of pounding against her house; she discovers that children outside are pelting the house with eggs and she yells for them to stop; she opens her front door and loses consciousness. A woman hears a scream from a neighboring house and calls a teen boy in the house to find out if everything is OK (he sounds upset). A woman walks outside holding an umbrella to cover her view and walks into the street in front of a car (we see headlights through the umbrella, hear a horn honk and understand that she might have been struck by the vehicle).
► A husband and his wife argue in front of their young daughter and it is implied that one of them has been unfaithful. A man and a woman argue when the man finds the woman in his apartment, he confesses that he is in violation of his parole and that he was in a bar fight; the man punches the wall while telling her the story. A woman yells on the phone when calling the police about a murder. A woman calls another woman, tells her to stop watching her house, and threatens to call the police; the second woman falls to the floor of her apartment and closes the shutters. A woman wakes with a start and searches for her phone, but cannot find it. A man seems to be yelling at his wife and teenage son at the dinner table.
► We hear that a woman died after a fall from a parking garage and it is described that it took 5 minutes for her to die after hitting the ground. It is implied that a woman has attempted suicide.
► A woman records a suicide video. A teen boy cries and seems upset about his family when talking to a woman in a few scenes. A woman says to a man over the phone, “I can beat myself up if I want.” A woman argues with her therapist about adjusting her medication. A man refers to a woman snooping on her neighbors. After a woman collapses another woman says, “You went down hard,” and asks her questions to determine if she has a concussion. A woman says that she has panic attacks. A teen boy says that he is allergic to cats. A reference is made to a woman being found dead. We hear that a woman went to prison.
► A woman is shown in a hospital recovering from an attack and she has bloody bandages on her face with a bruised eye and cheek. A woman squeezes a wine glass and it breaks in her hand (we see bloody cuts on her hands). A woman watches people in neighboring buildings in many scenes. A scene from a movie is shown where a man is being choked by another man. A woman drops a glass of wine on the floor when she is startled and it shatters. A computer falls on the floor and we see that the screen has cracked.

The Woman in the Window LANGUAGE 5

The Woman in the Window SUBSTANCE USE

– Prescription medication vials are shown in many scenes and a woman takes pills in a few of those scenes, a woman crushes medications into a powder and prepares to commit suicide, and a reference is made to someone being at a meth commune. A woman drinks a lot of wine in many scenes, a woman drinks wine to the point of inebriation in several scenes, a woman drinks brandy at the instruction of another woman, two women drink wine together, a woman sits in a bathtub with a glass of wine on a table nearby, and people make reference to a woman taking medications in combination with alcohol and that the combination can increase the likelihood of side effects that include hallucinations.

The Woman in the Window DISCUSSION TOPICS

The Woman in the Window MESSAGE

– Sometimes it is not clear where reality stops and hallucinations begin. 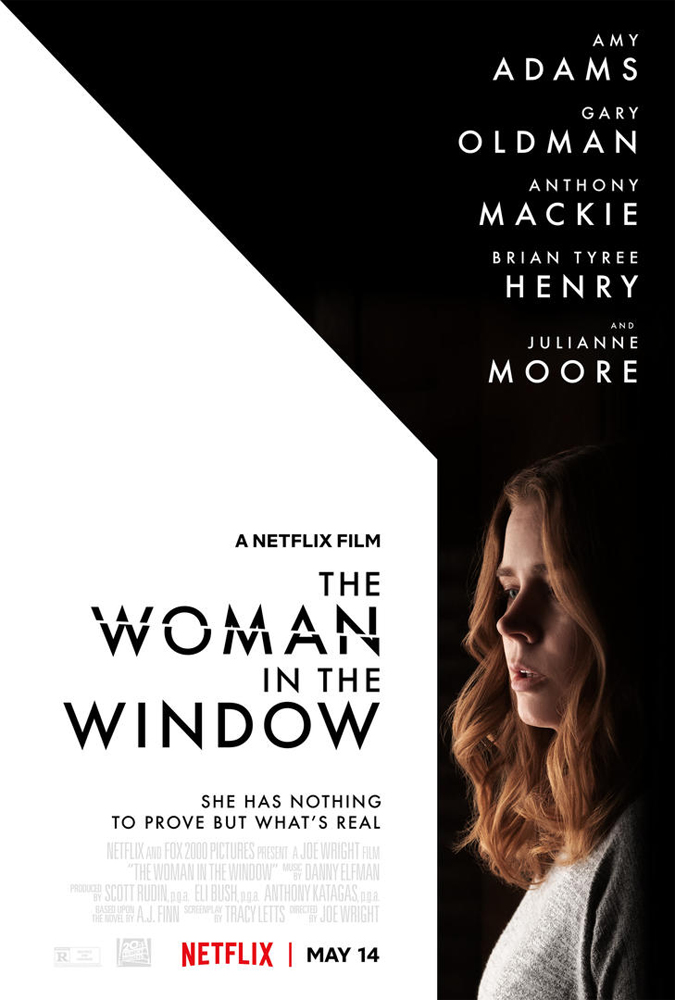