Sci-fi comedy set on the moon in the year 2087: Eddie Murphy is Pluto Nash, an audacious nightclub owner who gets in trouble when he refuses to sell his club to the lunar mob. Also with Randy Quaid, Rosario Dawson, Pam Grier and Joe Pantoliano. [1:36}

SEX/NUDITY 3 - A man and woman kiss a couple of times, a man kisses a woman's bare shoulder and they embrace. Men and woman are shown dancing in a nightclub a few times. A male robot slaps a female robot's bottom. A slot machine makes suggestive, sexual remarks to a robot. Two men admire a woman's derriere. A female robot's dress is sucked off when the atmospheric pressure escapes from a building on the moon, and she winds up wearing a bustier, panties and stockings. A female robot dressed as a French maid bends over to pick up her duster (we see her bare thighs and lace panties) and a man and a robot admire her (we see this happen several times). A man and woman shop for body alterations and we see them (in a holographic display) in bikinis and with different shapes: the woman ends up with a very large bosom and bottom, for example. Women dance wearing costumes with bikini tops and thong bottoms that show bare buttock cheeks and cleavage. Women are shown in tight-fitting outfits that reveal bare backs, shoulders, cleavage, bare abdomens and bare thighs. We see holographic images of women in bikinis and cabaret costumes on billboards. We hear a man zipping his pants after using the bathroom.

VIOLENCE/GORE 4 - A man is shot in the back by another man and falls down on the floor, and another man is shot in the chest a few times and we see him lying motionless on the floor. Two men are shot and dragged out of a room by the feet. There are a couple of shootouts: a lot of glass is shattered, bottles break, buildings are destroyed, and people are shot. A man uses another man as a shield and two other men shoot him repeatedly (we see holes blow out of his shirt). A robot is shot. A man is shoved into a large light array and he falls to the ground. Two men fight, punching and kicking each other, one wraps a cord around the other's neck, and one tosses the other out a window; the man falls many floors and crashes onto a table (presumably dead). Two men tie another man to a chair, wrap a chain around his neck, put a funnel in his mouth and threaten to pour battery acid in his mouth. There's a lunar car chase: one rams the other from behind, one rams the other from the side in a narrow tunnel, one shoots at the other, and one jumps over a cliff, crashes onto the other side and explodes. A building explodes; a man and woman are thrown to the floor, the building is covered with rubble and in flames. Two men get tasered in the chest and fall to the floor. Two robots are shot; one falls over a railing and lands a couple of stories down (we see some sparks as it hits). A mining outpost is blown up and the people inside try to escape; a woman is tossed up through a hole in the roof, and a robot dangles from a pipe as the atmospheric pressure is sucked out of the building. A robot punches a man in the face. A man attaches a jumper cable to a robot's earlobe and then charges him with a spark. A man and woman pass out from a lack of oxygen and a robot stops because his battery runs out. A wall falls on top of two men. A man is shoved down some stairs, a man is pushed back off a chair and lands on the floor, and a man is shoved into a chair by a robot. A robot pulls the arm off a slot machine. A man runs into a robot pulling a taxi-cart and knocks it over causing the robot to malfunction and the passengers to fall back out of the cart. A female robot slaps a male robot in the face. People are threatened with guns in several scenes, and a man verbally threatens a woman for information. Some men talk about killing another man. There are a couple of really gross scenes: one in a nasty, food-littered, dirty dish covered kitchen, and a filthy bathroom where we see brown water come out of a faucet and see dirt-caked walls. One of the bad guys has an eye disorder that makes him look unusual. We see a cryogenically frozen chihuahua.

SUBSTANCE USE - People are shown drinking alcohol and smoking cigars.

MESSAGE - Cloning is a dangerous proposition; you never know when you might run into yourself. 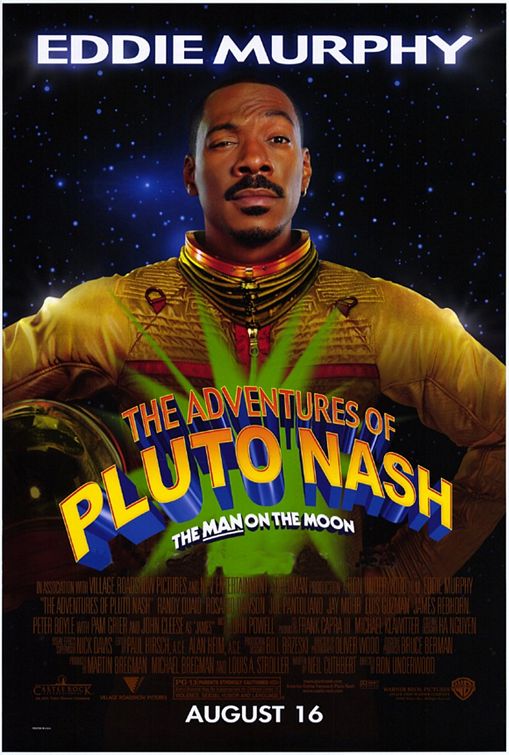