Tim Allen stars as Zoom, a superhero whose powers were lost during an over-exposure to gamma rays. However, the same rays empowered his brother, but also made him evil and he ended up killing the rest of their team and disappearing. He is coming back now to find and destroy Zoom -- if a new team of naturally super youngsters can't stop him. Also with Courteney Cox Arquette, Chevy Chase, Spencer Breslin and Kate Mara. Directed by Peter Hewitt. [1:23]

SEX/NUDITY 2 - A young woman and young man kiss, a girl kisses a boy on the cheek, and a woman hugs a man.
► A young man pushes a young woman to the floor, and while he is on top of her they gaze at each other briefly. A young man and a young woman flirt in several scenes.
► A man and a woman dance close to each other, and a young woman and young man dance close to each other.
► A woman appears infatuated with a man, and a man admires a woman in a revealing dress. A woman wears a low-cut dress that reveals cleavage, bare back and shoulders. A boy's swim trunks hang low revealing buttock cleavage. A man wears a skin-tight superhero suit that accentuates his form.
► A man tells several young people to "protect their privates."

VIOLENCE/GORE 3 - A man shoves a man, throwing him through the air, and then kicks the man, again throwing him through the air, and then punches him.
► A man throws concussive waves at people causing the ground to shake and the people to be knocked to the ground. Security guards are knocked out and to the ground by several young people (one is levitated, and one is squeezed when a boy expands).
► A young man punches a man in the face, a young woman throws stones at the same man hitting him several times, a boy expands and knocks him through the air, and a girl hits him with a large metal pole and he is thrown into a swirling vortex.
► A man is shot with a tranquilizer dart and collapses onto the floor. A man is knocked down and across the room when a door is broken down. Young people are struck repeatedly by rapidly firing paintball machines in several scenes (they complain of bruising afterward).
► A boy jumps into a pool, as he approaches the water he grows many times his normal size, and when he hits the water he pushes all of it out of the pool and although people and furniture are washed away, no one appears injured.
► A man is trapped in a weather simulator; he is rained on, he is struck by lightning (we see him singed), heavy winds blow, he is covered with snow, boulders roll down a hill toward him and he is sprayed in the face by a mechanical skunk. A boy expands many times his normal size and presses a man against a glass wall.
► A woman slips in grease and falls on the floor, and a woman trips and falls over a desk. A girl is nearly struck by a large net that is shot through the air. A woman crosses a street, a car nearly hits her, and the woman collapses in the street.
► A man who was exposed to radiation has glowing red eyes. A boy's eyeballs grow extremely large, then return to normal size, and his feet grow in another scene. A young man fades from sight, and then re-appears and other people watch with alarm.
► A flying saucer flies recklessly causing property damage. A man jumps and catches onto the entry hatch of a saucer that is flying away, dangles briefly and then climbs onboard. A girl throws a heavy weight through a glass window; the same girl throws a forklift across a room. A girl pulls a bed across a room (it had been bolted to the wall).
► A man threatens to expose several young people to radiation. We hear about several people being exposed to radiation that causes them to develop super powers and that one of them became unstable after the exposure. We hear that several people died while performing their super hero duties.
► We see a drop of blood when a boy's finger is pricked for a blood test. A boy blows a huge green bubble out of his nose, the bubble bursts and a man is sprayed with the green goo (presumably mucus). Three young women are sprayed with food (they are covered with goo) that explodes out of a cafeteria serving line. A man burps loudly.
► We see comic book illustrations of superheroes fighting villains during opening credits.

MESSAGE - People should never be exploited even if they have super powers. 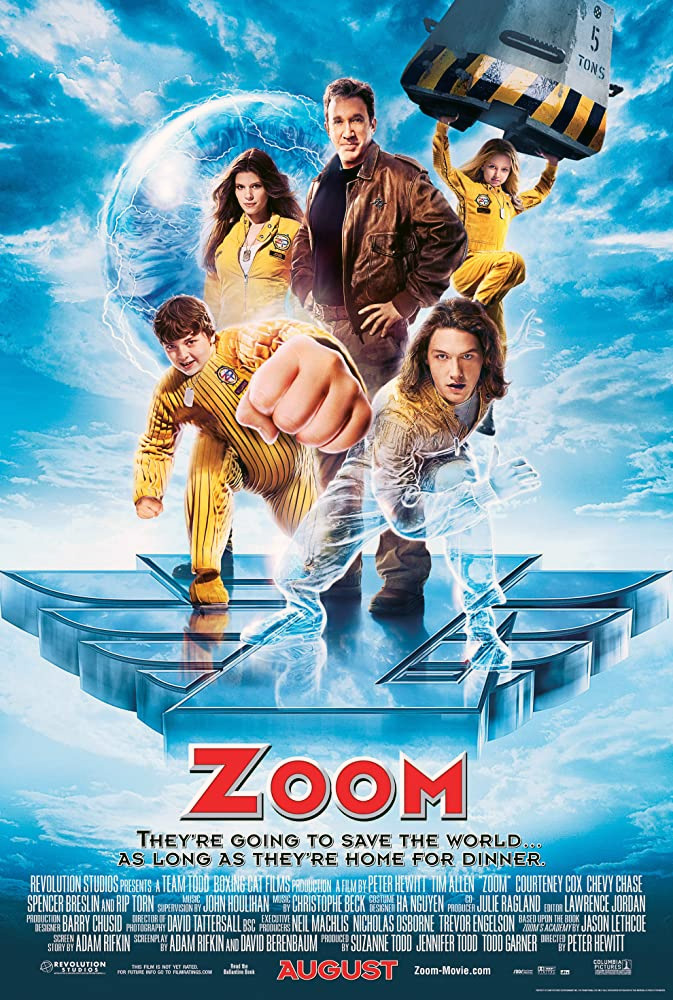