Why is “Work It” rated TV-14? The TV Parental Guidelines Monitoring Board rating indicates that “this program contains some material that many parents would find unsuitable for children under 14 years of age.” The Kids-In-Mind.com evaluation includes a boy visibly aroused and many dance sequences with teens dancing suggestively and wearing revealing outfits, an accidental power surge that leaves a teen singed, several arguments, acrobatic dance moves, and some strong language. Read our parents’ guide below for details on sexual content, violence & strong language. When a brilliant high school student (Sabrina Carpenter) is told she is boring during an application interview for Duke University, she auditions for her school’s dance team, but fails and is ridiculed. Still unable to dance, she forms a new team from the school’s misfits and a retired dance champion (Jordan Fisher) and is determined to win a famous dance competition despite obstacles. Also with Liza Koshy, Keiynan Lonsdale and Michelle Buteau. Directed by Laura Terruso. A few lines of dialogue are spoken in Hindi without translation. [Running Time: 1:33]

– A teen boy wearing baggy sweatpants in a dance competition gets an erection twice (we see the bulge briefly in close-up), and the audience gasps; at the end of the dance, he places his ball cap over his groin and his dance team is disqualified. Teen girls wear sleeveless crop-tops that bare their abdomens and cleavage, along with tights that hug their hips, buttocks and thighs. Many teen girls and a few teen boys wear form-fitting catsuits (we do not see outlines or details). A teen boy wears sleeveless shirts several times. A teen girl stands on a fountain wall in a town square and twerks while bent over with her hands on the ground. A teen girl twerks on the floor after doing the splits and while wearing tights. A teen boy, and then a teen girl in another scene, grabs the crotch of their trousers as they dance.
► A teen girl and a twenty-something man kiss briefly in two scenes, and for several seconds in another scene. A teen girl and a twenty-something man dance closely on a sidewalk, and then kiss each other for several seconds and the scene ends. A man holds a teen girl’s waist and then her hips while dancing. A teen girl in a mattress store says that she wants to buy a mattress, calls a teen boy working in the store “Mr. Right,” and gets him to lie on a mattress, and then lies beside him with her chest against his back; she then puts one leg over his leg as the scene ends. A teen girl imagines a teen boy shirtless and we see his bare chest and abdomen, as he walks toward her. A teen girl rips open her shirt to reveal a sports bra and cleavage and says, “Mama’s gonna get a mattress today,” and we later see her wearing a sleeveless blouse and short-shorts and a teen boy shirtless and wearing slacks while they both dance on top of a mattress in the store. A teen girl stares through a window of a mattress store at a teen boy working there, as if she is in a trance.
► Groups of teen dancers in several scenes perform with many pelvic thrusts, shimmying, twerking, and slinky movements.
► A teen girl reminds another teen girl that she was in trouble once for sexting someone, but no details are given. In a nursing home, a teen girl says an elderly man is not allowed to watch “50 Shades of Grey” anymore, because of “what happened last time” (no details are given). A teen girl tells a teen boy that when he drives his Prius, he looks like a tampon commercial. After a dance competition, a woman calls a teen boy by his stage nickname (Julliard), and he replies, “I don’t know who she is, but my name is Isaiah.”

– A teen girl running a light board for a dance presentation knocks a large cup of soda onto the board, which sparks, smokes and causes the lights in the building to go off; the leader of the dance team tells her she is banned from the light board and we see a teen girl nearby with her hair sticking straight up with charred ends and smudges on her face.
► A teen girl drives without a license on the wrong side of a street, swerving to miss an oncoming car. Two 10-year-old boys stand on a bridge on a high school campus and drop a water balloon that splats near a teen girl, but does not get her wet (the boys laugh). Two 10-year-old boys drop a water balloon between two teen girls under a bridge, it splats on the pavement, and the boys laugh and curse at them.
► Several dance scenes show teen boys and girls performing jumps, flips, somersaults and breakdancing moves. Teen boys and girls dance around an elderly man who is sitting in a chair; they kick and wave their hands near his head and he looks frightened but then appears to sleep and the scene cuts to his body under a blue tarp being wheeled out of a nursing home and a teen girl says that their bad dancing killed him.
► A dance instructor with an ACL injury grunts loudly in pain at his studio and sits down quickly, grunting again until a teen girl applies acupressure to his knee and he feels better. A teen girl takes a man to a park where they watch two young men dance hip-hop while using crutches; one of the men has one leg and the other trouser leg is rolled up and pinned and the one-legged person then drops the crutches and breakdances for several seconds.
► A man storms out of his dance studio, angry because he was fired and he argues with a teen girl outside for a few seconds and leaves. A teen boy sobs when he cannot get into the college he wants. A teen girl argues with her mother several times and the mother says, “I am going to kill you,” when the girl drives away in the family car (she does not have a license). Members of a dance team ridicule a teen girl who wants to join them, and then insult her after auditions and send her away. We hear that a teen girl’s father died when she was 12, but no details are given.
► A teen boy in a karate class lightly punches a large standing punching bag, and the class does a few mild punches. A teen girl falls several times while learning dance moves, and falls down a few steps in front of her house, but is never injured. A teen girl breaks a ceramic art object at school and is suspended.
► An elderly woman in a nursing home tells a teen girl that many people living there earned academic degrees and had high-level careers, only to end up in a nursing home to sleep in front of a TV; we see a few elderly men sleeping in chairs in the common room.
► We see the face of a teen girl as she sits in a stall and we hear her urinate.

Work It SUBSTANCE USE 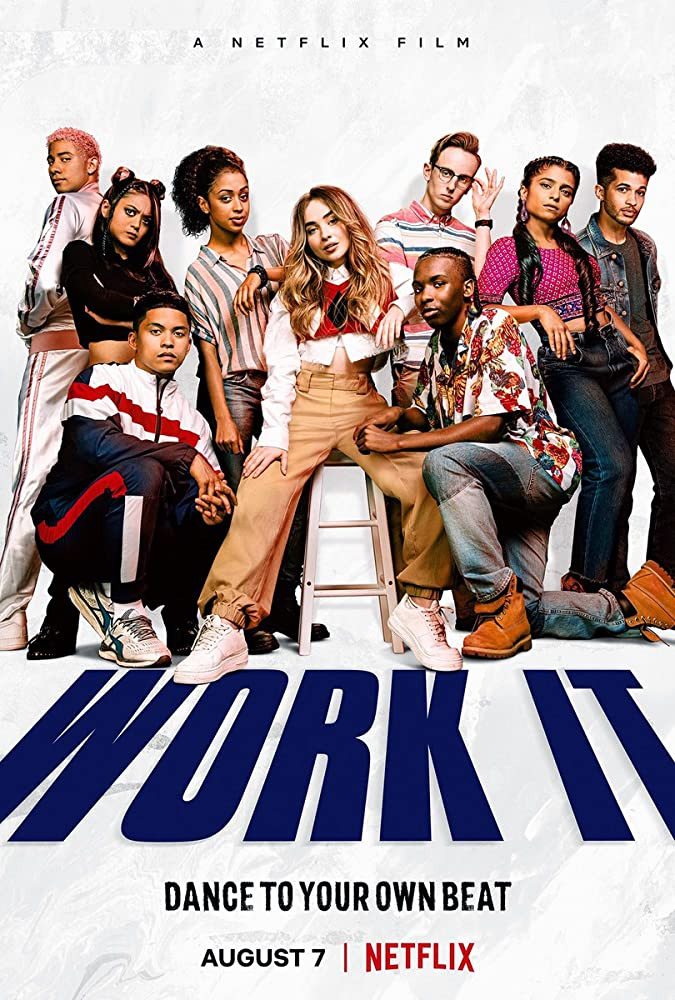