Why is “Windfall” rated R? The MPAA rating has been assigned for “language throughout and some violence.” The Kids-In-Mind.com evaluation includes several discussions of infidelity, deaths by gunshot, bludgeoning and accidental collision with a glass door, many arguments and yelling, and over 70 F-words and other strong language. Read our parents’ guide below for details on sexual content, violence & strong language. An inexperienced burglar (Jason Segel) breaks into a vacation home, but while he gathers loot, the wealthy and narcissistic CEO property owner (Jesse Plemons) and his wife (Lily Collins) unexpectedly arrive. A hostage situation develops, with twists and unexpected turns. Also with Omar Leyva. Directed by Charlie McDowell. [Running Time: 1:32]

– A man and a woman briefly hold hands.
► A man says he and his wife are trying to have a baby; we see birth control pills in her purse. We hear that a married man had a recent affair with another woman, paid her off, and required her to sign a nondisclosure agreement; his wife says that this was “another affair,” implying several affairs. A husband tells his wife, “Baby, get those clothes off,” and she refuses and laughs. A husband tells his wife to “get close” to another man to get information from him; sex is implied, but no sex occurs.

– A woman picks up a heavy sculpture, and walks outside where she screams twice and beats a man below the frame (we see blood on the sculpture), points a gun at another man as he shouts, and she shoots him in the chest three times in a long shot (he is presumably dead but we see blood splattered on her shoes). A man standing outside with his wife and another man with a gun in his pocket takes a diagram from his gardener and writes “Call 911” on it; the gunman sees this and takes the other three people into the house and sits them on a couch and a chair, holding a gun on them as one of the men belittles and shouts at the gunman, who shoots into a wall; the other seated man runs to a glass door, accidentally rams his head through a glass panel, yelling and grunting as we hear glass breaking, flesh tearing and he pulls his head out (blood rushes from his throat to soak his shirt and a curtain), he gurgles and falls below the frame as the gunman tries to help him, shouting several times, but the other man says, “He’s dead.”
► A man holds another man and his wife at gunpoint; the man has his wrists tied and sits in a chair with his nose in a corner, the woman has her ankles tied and sits in an armchair and she uses a shard of glass to cut her bindings; the gunman then turns the other man around, berates him for being selfish and disgusting, saying, “I feel sick,” and “You’ll always be alone; she [his wife] has birth control pills in her purse,” and he takes a duffel bag of money. A man ties up another man and a woman at the ankles with computer cords, sits them on a couch, releases them and takes them to a sauna where he barricades them inside with a heavy table (the sauna is not on); he throws a handgun and the couples’ smartphones into a fountain, and runs away but later returns and fishes out the handgun; he finds that the couple has escaped and chases them through a grove, shouting at them until he tackles the man (there are no injuries).
► Two clothed men in different scenes face away from the camera and urinate in streams that we can hear but don’t see (one is in a shower stall and one on a rock). A woman says, “I have to use the bathroom” and a man says, “Pick a corner of the living room and do your business”; she enters a bathroom and we hear a flushing toilet off-screen. A character in a movie spits to a point off-screen and we hear but do not see the spit. A woman walks in the dark, hyperventilating, gagging, and coughing in fear for several seconds.
► A man rudely slams his front door in his gardener’s face while the second man is talking. Dozens of scenes include arguments and a few shouting matches on a telephone, between two men, a man and a woman, and two men and a woman; one of the men is impatient with all the other people and belittles and mocks them. Ominous music plays throughout the film.

– A man and a woman drink briefly from cans that could be either beer or soda, and a man at home asks for a Bloody Mary but does not get one.

– Unfair business practices in America can lead to devastating consequences. 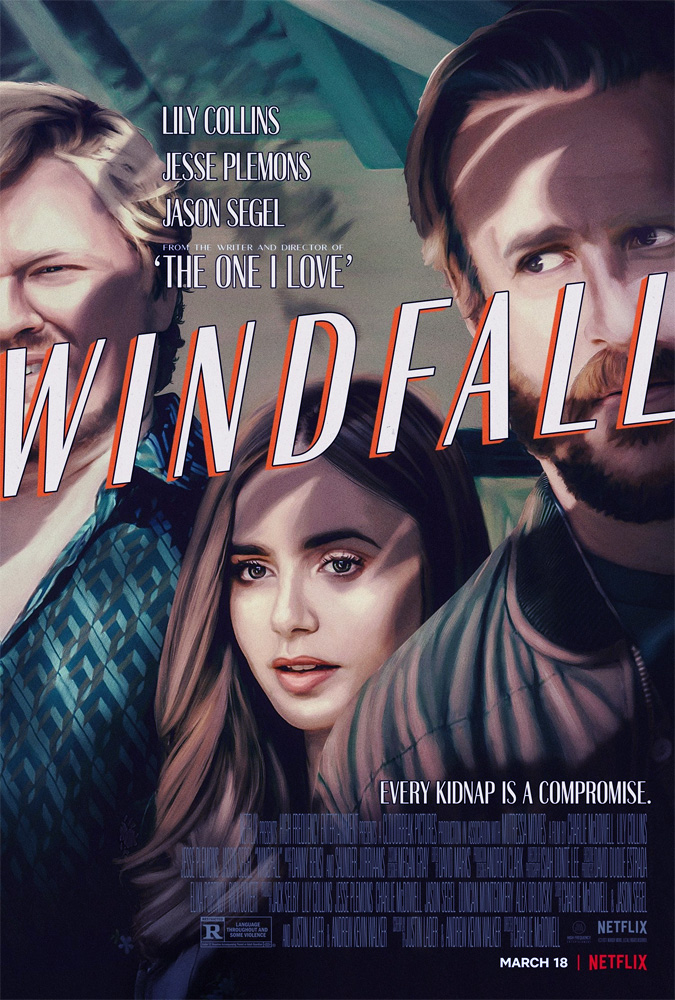