A New Yorker (Kristen Bell), who's ambitious and creative at her museum job, is a total failure at romance. While attending her younger sister's wedding in Rome, she steals five coins from a church fountain, and suddenly several men (Josh Duhamel, Will Arnett, Jon Heder, Danny DeVito and Dax Shepard) begin to stalk her professing their love. Also with Anjelica Huston, Don Johnson, Alexis Dziena, Kate Micucci and Peggy Lipton. Directed by Mark Steven Johnson. [1:31]

SEX/NUDITY 6 - Newlyweds stand nude in their kitchen behind a counter: we see his bare chest and her shoulders and back as they kiss and sink to the floor, off screen.
► An artist paints a large nude mural of a woman and we see uncovered breasts and a portion of pubic hair.
► An older man grabs his female museum guide by the arms and tries to kiss her. A man and a woman in a pew smile at each other and move closer together. Several scenes show couples kissing for a moderate length of time and saying, "I love you" to each other.
► A man presents a woman with a package of bratwurst and says, "The bratwurst is saying 'Hello'" as he stands close to her; she runs, and he chases her around an exhibit, but does not catch her. A street artist displays a book of cartoonish sketches of thin and fat nude women, all with the same face, and when he sees a woman in the street with the same face he chases her, begging to see her bare feet, but she gets away.
► At a wedding reception, a man helps a woman translate a toast by saying that the woman wants the bride to share the groom with her. A woman asks to borrow a man's cell phone to call work, but he accuses her that she wants to copy his number to make a booty call (for sex) in the middle of the night. A woman says her Italian boyfriend's name is sexy. A male model at a wedding tells a male artist that he would love to do a nude portrait sitting for him and the artist says that he would like that very much.
► During a wedding, the bride runs away and we later see that the priest is under a magic spell and wants to marry the bride himself. Four different men, under a magic spell, chase a woman around Rome and New York City, begging her to marry them.
► A male model wearing a tank top sits in front of a woman in a restaurant. Several women wear low-cut blouses that reveal moderate cleavage. A woman wears a sleeveless gown with a front that is open from the throat to below the waist, showing significant cleavage, a woman wears a very low-cut blouse that reveals significant cleavage and women wear low-cut tops that reveal significant cleavage. In Rome, scenes feature scantily clad female statues and nude male statues. A man shows a woman his modeling portfolio with photos of him in various stages of undress: one photo shows him nude and holding a dog in front of his groin. A woman jogs in snug running tights and a tank top on the street, and a man runs up next to her in an identical but even tighter outfit. A man with an open shirt stands on a street corner and his shirtless portrait in on the side of a bus. A man in a restaurant removes his shirt in a close up; the woman who had been seated with him runs away while he flexes his muscles in a wall mirror, admiring himself and asking diners to do the same.

VIOLENCE/GORE 3 - A man stands on a window washer's scaffold in order to see a woman in her high-rise office and falls off backwards and out of frame (we see later that he is unhurt).
► A street magician doing a card trick for a woman pulls a fake bloody heart from his shirt, containing the card she picked; bystanders scream and run away. A magician breaks into a woman's apartment and hangs by the feet from her living room ceiling, and wrapped in white gauze, for an escape trick; she enters the room and screams, he falls on the floor and breaks a coffee table, and she yells at him to leave.
► A tall man seems to be accident-prone though most of the film: He walks into poles, falls over parked cars, falls over a part of a horse carriage and lands on the windshield of his friend's car (breaking the glass), and falls into a large opening in a sidewalk that is a delivery entrance for a basement-ground market; he is not hurt in any of these scenes and he tells friends how he was once struck by lightning while playing professional football.
► Lighting strikes a transformer in NYC and causes a partial blackout; a man that was once struck by lightning several years previously, runs through a darkened street, chased by lightning strikes, but he is not struck.
► A maid of honor at an Italian wedding is asked to break a large "happiness vase," but it will not break: she throws it onto the floor, smashes it through a tower of glasses of wine, beats it with a microphone stand, throws it and knocks down an older woman, and pounds it on the floor; eventually a man throws it like a football into a distant wall, where it shatters, predicting many years of happiness for the newlyweds.
► A woman sprays breath spray into the face of a man on a street, assuming he is going to attack her (he is unharmed).
► A woman has lettuce on her teeth and pauses to remove it in a close up. An older woman spits on another woman's feet, which are off-screen.
► Four men and one woman get into a tiny yellow car that looks like a circus clown car: tightly packed, they speed down NYC streets in a thunderstorm, in and out of traffic, on sidewalks, through the open doors of an art museum and into an elevator where they ride to the 5th floor and drive out.

SUBSTANCE USE - Numerous scenes throughout the film show bottles, glasses and plastic cups of beer, wine, alcohol punch, and champagne and men and women are shown drinking, partygoers drink alcoholic punch, a woman drinks wine at home with another woman, two wedding receptions feature tables full of wine glasses and men and women drinking, a woman attending a wedding reception staggers and a friend suggests she is drunk, a woman sits alone and drinks most of a champagne bottle, a museum open house scene features men and women drinking wine, an apartment scene shows four men playing poker and drinking beer, a man enters an apartment with a six-pack of beer and chants, "Six bottles enter, none leave," and song lyrics refer to an inebriated woman. 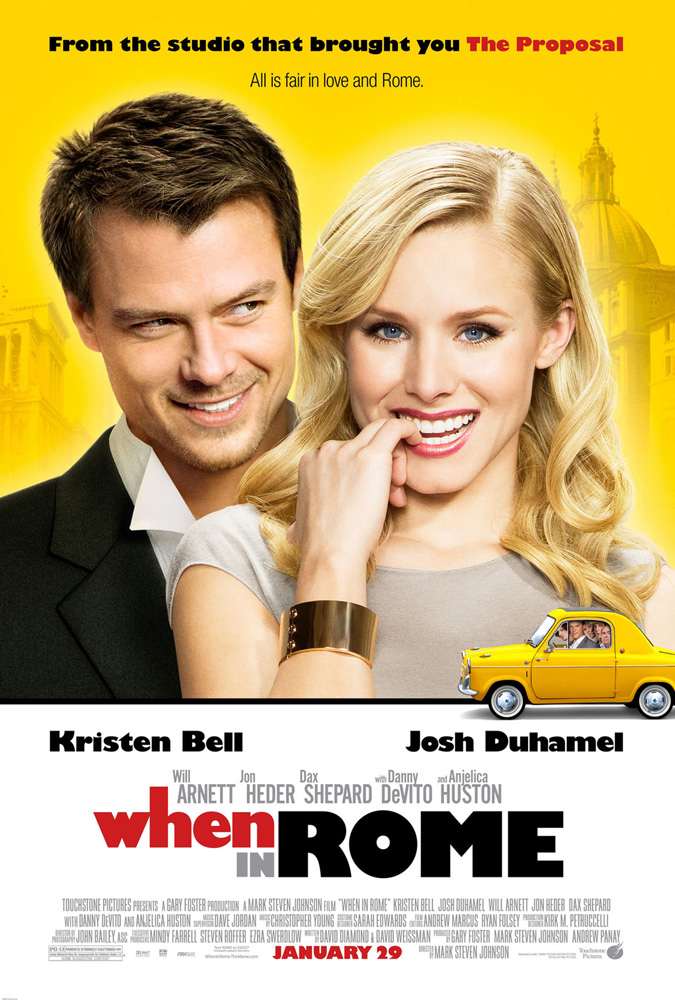