Why is “Vivo” rated PG? The MPAA rating has been assigned for “some thematic elements and mild action.” The Kids-In-Mind.com evaluation includes a few hugging and dancing scenes and discussions of love, the death of a man, several scenes of risky adventures and encounters with wild animals and storms, and some name-calling. Read our parents’ guide below for details on sexual content, violence & strong language. A one-of-a-kind musical kinkajou (voiced by Lin-Manuel Miranda) performs for the crowds in a Havana plaza daily with an elderly organ grinder (voiced by Juan de Marcos Gonzales). When the old man receives a letter from his famous ex-partner (voiced by Gloria Estefan), inviting him to her farewell concert in Miami, the kinkajou must get a special message from the old man to the singer before it’s too late, and gets help from a quirky young girl (voiced by Ynairaly Simo). Also with the voices of Zoe Saldana, Michael Rooker, Brian Tyree Henry and Nicole Byer. Directed by Kirk DiMicco & Brandon Jeffords. Several lines of dialogue are spoken in Spanish with English subtitles. [Running Time: 1:38]

– A man and a woman dance together in flashbacks and they hug for several seconds. An elderly man (in a dream) is shown on a stage and plays a guitar with an older woman who is playing a piano; they transform to younger versions of themselves, dance closely, and change back to their older selves, also dancing closely.
► An elderly man says that he always loved a certain woman, but was afraid to tell her so; he pulls out a sheet of music for a love song that he wrote for her and puts it away again. A large bird complains that he has never found a mate and throws himself into a hole in the ground, saying that he should die, but a kinkajou pulls him out of the hole. Two birds flirt, smile, giggle, and dance together.
► A woman wears floor length dresses slit to mid-thigh that reveal her legs and cleavage in several scenes.

– A kinkajou becomes angry with a man, chatters at him, locks itself in a suitcase, and then jumps out and runs outside; when it returns late at night it finds the man asleep in an armchair, but then finds the man dead in the chair in the morning and it whimpers and looks sad.
► A memorial service is held for a man, we see his portrait among many lighted candles and people hold smaller lighted candles while a kinkajou whimpers several times.
► A preteen girl and a kinkajou purchase bus tickets to Miami, but they are stopped by three girl scouts who criticize them and demand to take the animal for vaccinations and quarantine; the first girl and the animal escape, miss the bus, but steal a bicycle, while the girl scouts chase them on scooters as a car almost hits them, but screeches its tires and the girls tell the man, “Shame on you!” A preteen girl and a kinkajou try to bike across an open drawbridge, fall off, and land in sand piles on a barge; the kinkajou coughs up sand and the girl pretends to be a cat digging in a litter box. A preteen girl builds a rickety raft, falls into the water (she is fine) while a kinkajou jumps onto the raft and they float from Key West to the Everglades. A woman chases a bus in her car, shouting and honking her horn for several seconds. A kinkajou falls onto the windshield of a moving car, but is uninjured. A kinkajou chases a sheet of music that the wind blows out a window and avoids being hit by traffic. A man is nearly hit by a car, but the driver slams on the brakes with screeching tires. A flashback shows a kinkajou as a baby when it fell off a fruit truck and was chased by dogs; a man saved it and took it home.
► A kinkajou stows away in a suitcase that is tossed around a plane’s baggage compartment and later, around a house and onto a counter; the animal says it has a headache and bounces the suitcase off the counter and rolls it into another room where a preteen girl opens it and screams with delight for several seconds.
► A preteen girl’s backpack is shown with clumps of old chewed bubble gum and trash in it and a kinkajou looks into it and backs away.
► Three alligators swim close to a girl and a kinkajou on a raft, but do not harm them, though one gator jumps out of the water to snap a low tree branch in two. A preteen girl and kinkajou on a raft are separated by a freak storm with loud thunder and heavy rain that washes the girl downstream as the animal climbs a tree. A kinkajou meets a spoonbill bird that jumps into a hole and says he should die because he has no mate (please see the Sex/Nudity category for more details). A giant python with glowing eyes and scales chases a kinkajou through a bayou, showing its large sharp fangs and slithering tongue; the kinkajou escapes by swinging away on vines, and two spoonbills grab him and fly away to safety. A giant python threatens animals to be quiet because it cannot stand noise, and the animals cower and tremble. A preteen girl on a raft is trapped against a banyan tree as a set of glowing eyes float toward her in the water and the creature surfaces to show it is a turtle. Three girls in a motorized boat follow a preteen girl on a raft and threaten the girl that unless the kinkajou is quarantined it will die because it has missed its vaccinations. Four girls are attacked by a giant python, they run and scream as it chases them through a bayou, they hide in the roots of a banyan tree, but the snake wraps around the roots and squeezes; a kinkajou calls out to the snake, which chases it up and down trees, gets caught in a branch, struggles, and ties itself into knots around the branches of the tree and the girls and the kinkajou escape.
► A woman in a nightclub dressing room learns from a newspaper that her old band partner and friend died, she sobs and she refuses to take the stage. A preteen girl and a kinkajou evade a nightclub security guard who tries to grab the girl when they sneak inside the club; the girl is caught by the guards and her mother arrives shouting loudly at her.
► Three small gravestones are shown in a closet and a preteen girl says they are three deceased pets; we later see glowing ghost outlines of the pets come out of the gravestones and play outlines of instruments. We hear that a preteen girl’s father died and we hear his widow talk to his picture. A preteen girl and a kinkajou look sad after a piece of sheet music is destroyed, but they work together to recall the lyrics and melody and make another copy of the song. A preteen girl sings a loud song backed by electronic music in a few scenes and in one of the scenes, she stomps and looks like a giant. A man and a kinkajou argue briefly a few times, a woman and her preteen daughter argue loudly several times, and a preteen girl argues with another preteen girl a few times.

– Love will never leave you if you keep its song in your heart. 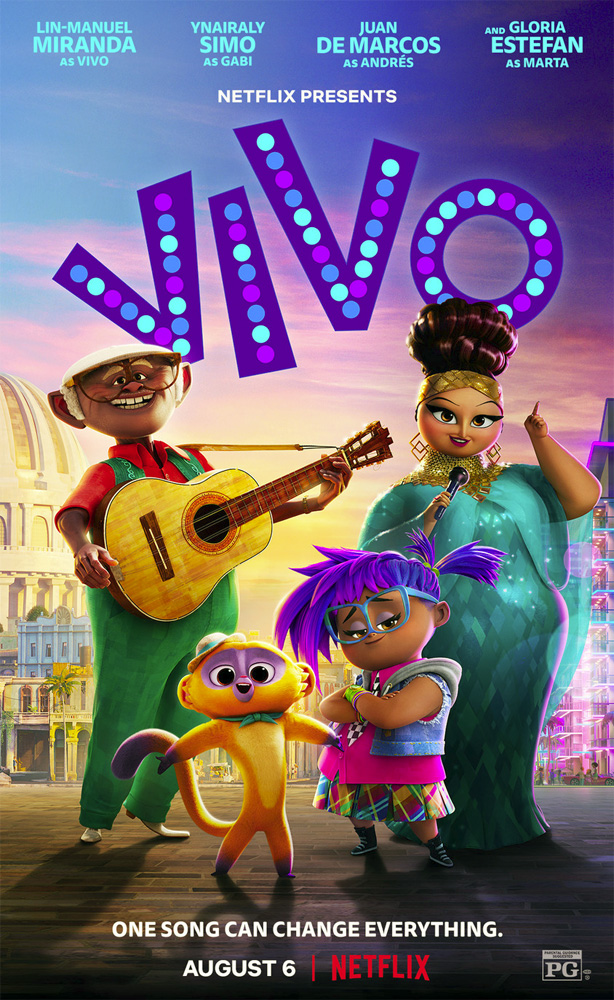