A widowed middle-aged professor from Connecticut (Richard Jenkins) finds two illegal immigrants living in the apartment he has kept for 20 years in New York City. They are a Syrian musician (Haaz Sleiman) and his Senegalese girlfriend (Danai Gurira), and the professor asks them to stay, as he attempts to find his own place in life. Also with Hiam Abbass. Directed by Tom McCarthy. [1:48]

SEX/NUDITY 2 - A woman clothed in a long shirt enters the dark bedroom of a male friend, sits on the bed and begins to cry (we see the outline of her bra clasp under her shirt), climbs under the covers (he is in bed covered by a quilt and wearing a short-sleeved T-shirt), and the man embraces and kisses her once on the neck; the scene cuts to the next morning at an airport where they hold hands, embrace and kiss each other on the cheek.
► A man opens a door and we see a young woman in a bathtub filled with water up to her chin (we see only bare shoulders under the water). A middle-aged man is bare-chested with a towel wrapped around his waist. A young man is in a T-shirt and briefs, and when another man enters the room, he apologizes and puts his jeans on. A man wearing a T-shirt and boxer shorts practices playing an African Drum.
► A young man says to a young woman, "You are very, very sexy when you're mad at me." A man, while practicing on the drums, tells a young woman that he will keep his pants on, she is startled and leaves the room.

VIOLENCE/GORE 2 - A middle-aged man enters his apartment and sees that someone is there, opens a door and we see a young woman in a bathtub, she screams loudly, the man slams the door shut and apologizes, and a young man enters and slams him against a wall, and they argue loudly.
► Police stop a young man on a subway, discover that he is an undocumented alien, take him into custody and transport him to a detention center. In an evening street scene, two police officers question a young man briefly and casually. Two plainclothes police officers question a young man who became tangled in a subway turnstile, they handcuff and arrest him for insufficient documentation, and lead him away to jail while another man tries to dissuade them.
► A young male immigrant in a detention center shouts at his visitor through Plexiglas in a visiting cubicle, he is afraid and angry and he explains that he is not a terrorist.
► Three scenes of the inside of an immigration detention center show many guards present, iron bars, and thick security doors; a young male detainee tells a visitor that it is depressing there because the lights are always on so no one can get any sleep.
► An immigrant tells a man that his father became ill in prison and when he was finally released, he died. An immigrant talks about his mother being an undocumented immigrant and there is danger of being deported because of problems with lost paperwork. A male attorney and a woman argue briefly about immigration laws and he explains that post-9/11, enforcement of these laws had become very strict. A man questions an immigration officer at a detention center, becoming passionate and loud, and begins yelling. Two middle-aged men argue briefly.

MESSAGE - Human connections are waiting to be made everywhere, but can be lost in an instant. 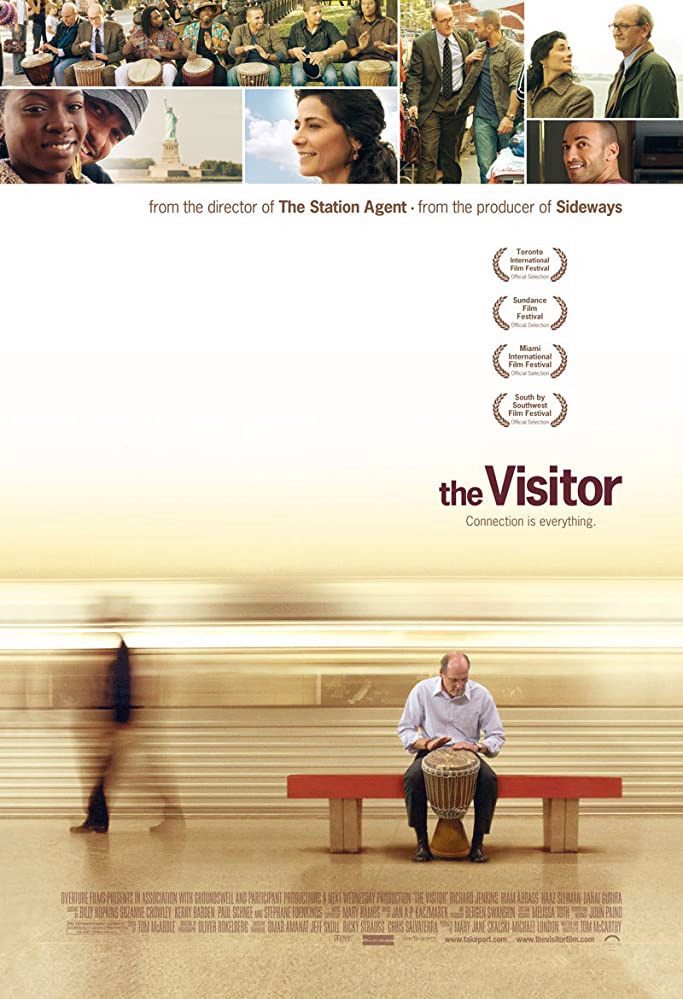