A parody of the "Twilight" movie series follows the story line closely, with a young woman torn between her love for a vampire and her friendship with a werewolf. With Jenn Proske, Matt Lanter, Diedrich Bader, Chris Riggi, Arielle Kebbel, B.J. Britt and Charlie Weber. Directed by Jason Friedberg & Aaron Seltzer. [1:20]

SEX/NUDITY 6 - A young man and a young woman sit on a bed, they kiss, she pushes him back and kisses him, she removes a ring from his finger using her mouth and reveals that she has changed it into a tongue piercing; they continue to kiss, he stops her, she climbs out of bed and removes her nightgown (she is wearing a black bra and panties, and both have flashing lights strategically placed over her nipples and pubic area) and she says, "I want to go all the way."
► A young man removes his shirt (his chest, abdomen and hips are visible) in front of a crowd of people in a town square; he removes his pants (his crotch is blocked by the crowd and then a large disco ball when the camera moves in closer) and turns to show his back and we see his bare buttocks and buttock cleavage when he bends over. Four men wearing cutoff jeans and no shirts dance together and make suggestive moves toward each other. A woman wears a deep-cut and short top that reveals cleavage and bare abdomen. A man is shown bare-chested and another man wears his shirt unbuttoned and we see a portion of his bare chest.
► A young woman asks her father why a sex doll is in her room (we see the doll wearing a bikini and its open mouth is heavily covered with dark red lipstick) and he says, "I miss your mother." A young man is shown with a noticeable bulge in his pants, grabs it as he walks into a high school lunchroom, and a young woman appears impressed.
► Two heterosexual couples kiss passionately and caress each other in the middle of a crowded school lunchroom. A man and a young man kiss. A young man and a young woman stare at each other across a room. A vampire bites a young woman's neck (we hear a crunch) and she moans (a trickle of blood is seen at the puncture sites). A young man and a young woman hug and he caresses her face.
► A father makes a crude remark to his teenage daughter about the size of her breasts. A young man and a young woman talk about playing doctor when they were kids and she says that she performed a prostate exam on him (he seems disturbed by the idea). A young woman talks about wanting to have sex with a young man. A young woman talks about a vampire abstaining from sex. A young woman talks about wanting her relationship with a young man to be sexual. A man yells about being confined to a wheelchair and rants about as to what is below his waist, making references to his penis.

MESSAGE - Any popular movie theme can be made into a parody, and it certainly will. 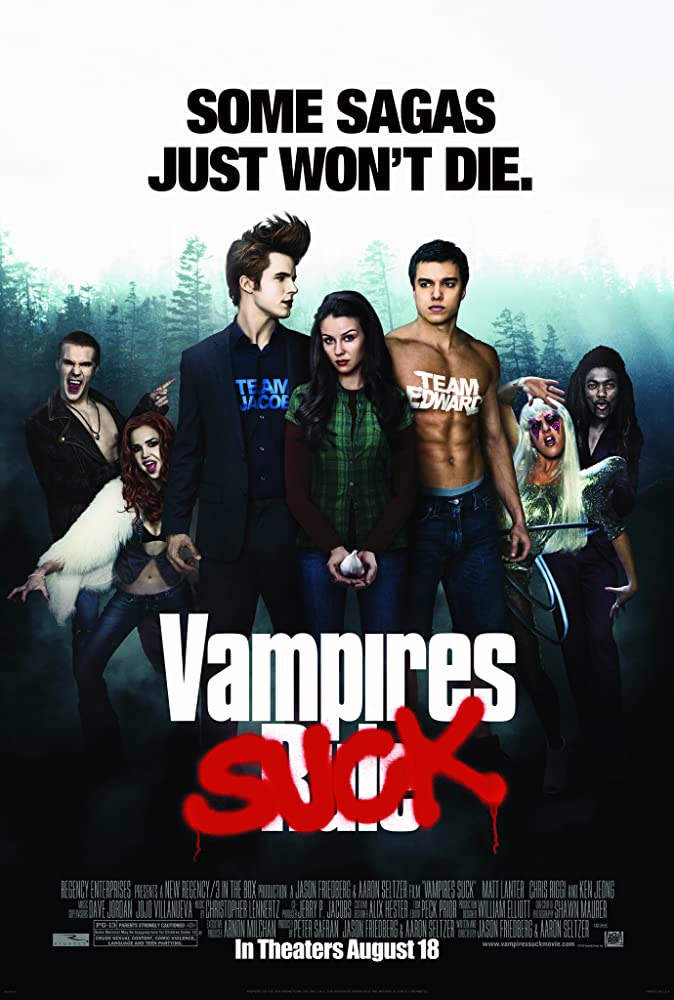