SEX/NUDITY 7 - Lots of sexual innuendo and several kisses, some passionate. A man and woman dance suggestively, then go to a bedroom where they kiss passionately. A man drops his pants and asks a woman to perform fellatio (using a slang term); she balks, but asks him to take off his shirt, kisses him a little more, and proceeds to tie him to the bed and pour hot wax from a candle onto his genitals (we only see his pained reaction). A man and woman kiss passionately, then we see them lying nude (although covered by a sheet) in bed, apart from each other (she looks disappointed, and it's implied that whatever was supposed to happen did not). A man grabs a woman's thigh as they kiss passionately; a woman who's watching them begins unbuttoning her shirt (no nudity is visible), and we learn that the man had asked her to join the two of them (they stop kissing, and both women leave without anything happening). We briefly see a man chasing a woman in a robe up a staircase, we later see her in a robe walking down the staircase (we learn she's the young stepmother of one of the main characters). We see a young boy and girl kissing underneath bleachers at a dance; when a group of boys discovers them, she accuses him of attacking her, and the group takes off the boy's clothes (we briefly see him in his underwear) and starts beating him up (see Violence/Gore). In an art exhibit we see photographs of a woman's bare breasts, the side of a woman's bare breast, a woman's thong-covered buttocks, several men's bare chests, and a few embracing couples. We see the shape of a woman's body through a shower curtain (no nudity is visible). We see several women in cleavage-revealing tops, a woman wearing a midriff-revealing tank top, a woman wearing a bikini, and two women in different scenes wearing towels wrapped around their bodies. We briefly see a man putting on women's nylons, and another man teases a woman about stealing her underwear and wearing it.

VIOLENCE/GORE 8 - A masked person throws someone into a hot tub, closes and locks the cover of the hot tub, drills through the cover (the drill grazes the person's arm, which bleeds profusely in the water), and finally throws the drill into the hot tub, which electrocutes the person inside (we later see the corpse floating in the water). A masked person throws someone through a glass shower door and then lowers the person's neck onto a large shard of glass (the person's face is very bloody; we later see the corpse in a puddle of blood). A person is shot in the stomach with three arrows, which knocks the person through a screen and over a staircase railing; the person falls many flights and lands in a dumpster. A person is stabbed in the back with an axe and falls to the floor (we see blood on the back of the person's robe where the axe is sticking out; we briefly see the corpse again later in the movie). A masked person stabs several zipped body bags holding corpses; also, the person unzips one bag and slits the throat of a live person inside (we see a close up of the blade going across the person's throat and hear a slitting noise, then see a little blood dripping from a tube attached to the table the person's lying on). A masked person hits a person's face with an iron, places the hot iron on the person's cheek (a sizzling noise is audible), then beats the person, presumably to death, with the iron (we see the motion but not the impact). A person is shot repeatedly and killed (we see a little blood on the person's mouth). A person is grabbed by the neck from behind and appears to stab the attacker in the leg with a scalpel (no blood is visible). Sparks briefly shock a man when he turns on a light switch. After a group of boys pours red punch on another boy they take off his clothes, throw him onto the dance floor and kick him repeatedly (we don't see the actual impact of the kicks; we briefly see blood drip from his nose afterwards). A masked person threatens a woman with a knife, then she hits the person's head with a pool stick. A person is kneed in the crotch and another is hit in the head with a champagne bottle). A woman nearly hits another with an iron, and two people tumble down a staircase together and are temporarily dazed. We see a bare-chested male corpse lying on a table before a medical student covers the face (we see a close-up of the face first); twice the student readies to cut open the abdomen. Two corpses (one with large stitches on its chest) are seen when body bags are unzipped and a corpse falls out of a closet. A corpse's head rises to the surface of a pond, and a masked person drags a corpse (no blood is evident) through a door. Several times we see blood running from a masked person's nose after the person kills someone; also, in one scene blood runs from a person's nose and drips onto another person. We see a bloody cloth lying on a table where an autopsy presumably occurred. After a woman bites into a piece of chocolate from a box she was given, we see her disgusted reaction and see a close up of maggots moving in the half-bitten piece she's holding; she coughs up the part she just ate and starts screaming. A woman dunks her head in a toilet to rinse shampoo from her hair. A couple of people receive Valentine's Day cards with threatening messages (one shows an illustration of a knife that moves toward a woman's neck when the card opens).

LANGUAGE 6 - At least 7 F-words and 1 F-word derivative, two anatomical references (one is clinical), many scatological references, many mild obscenities, a couple of religious profanities, and a few insults.

MESSAGE - Your cruel actions toward others could come back to haunt you. 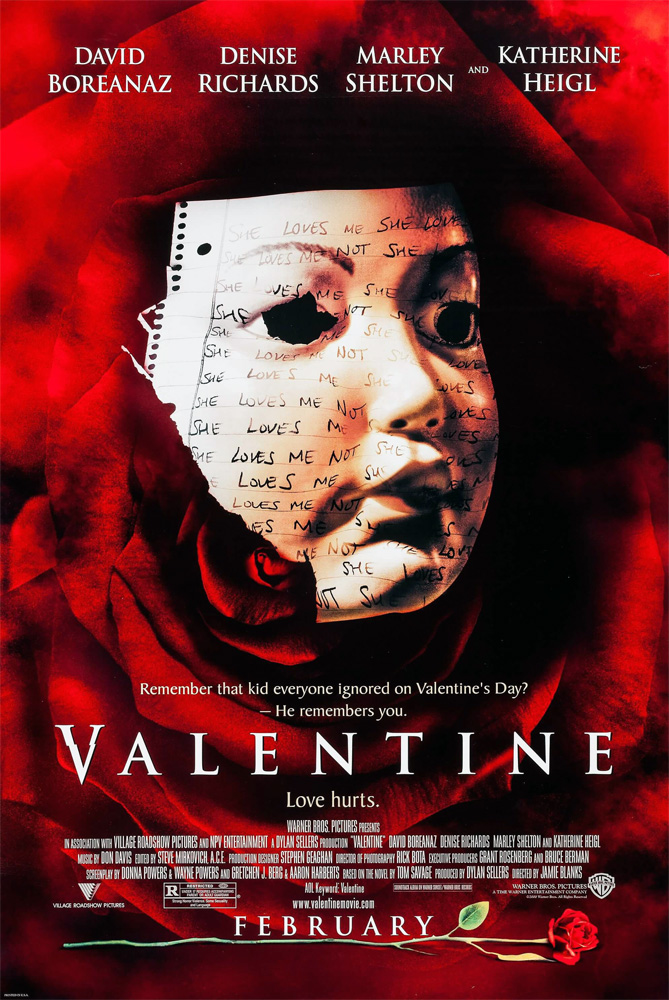