Diane Lane stars as an FBI CyberCrimes agent, who stumbles onto the site of a serial murderer who posts live streaming video on the Internet of the torture and murder of animals and people. Because the deaths happen faster as the number of online viewers increases, she is operating against the clock. Also with Billy Burke, Colin Hanks, Joseph Cross, Mary Beth Hurt and Peter Lewis. Directed by Gregory Hoblit. [1:40]

SEX/NUDITY 4 - An FBI agent talks about being approached by a retired principal while posing online as a young girl.
► We see quick glimpses of what appear to be pornographic websites; one shows clothed women in provocative poses (bare legs and thighs are visible).
► A man and a woman sleep in bed together; they are both clothed and there is no implication of sex.
► We see many photos and clippings depicting men hanging on the walls of a man's stairwell walls -- several are bare-chested and in various poses (are some are caressing and holding each other).
► A woman showers and we see her bare back. A woman wears low-cut tops that reveal cleavage in several scenes. Male victims of torture are shown bare-chested during torture sequences.
► An FBI agent refers to people who are watching people having sex online. FBI agents discuss online fraud and pornography in several scenes.

VIOLENCE/GORE 9 - A man is bound to a chair in a vat of water, he is gagged and bare-chested and a police badge is stuck in his chest (a bit of blood seeps into the water from the wound); sulfuric acid begins to mix with the water, he wriggles and moans as the acid burns his flesh, the water begins to turn red, he moans, we see flesh separating from his body, we see him go still and later see him with the flesh completely burned off his hands (we see skeletal fingers).
► A man in a dark parking lot is tasered in the neck, pushed into a van and we later see him chained to a frame and gagged: we see IV drip bags nearby administering a drug that is presumably a blood thinner, he has letters carved into his chest that bleed, we see blood pour from his nose and ears, we hear blood splashing onto the floor (he writhes and moans and pleads) and we eventually see him motionless after he dies from blood loss.
► A man is tasered in the neck and falls down a flight of stairs: we then see him as his legs to the hip and hands are covered in cement and bright heat lamps are around him; we see his skin begin to burn, then bubble and blister, his eyes swell shut, he struggles to try to move, his skin becomes charred, he slumps over and we later see him completely charred and dead.
► We see videos of people committing suicide: one person lights himself on fire (we see him engulfed in flames), another man shoots himself in the head (we see blood and the back of his head blow off), and the man falls back off a bridge and crashes onto a car in the street below (we see this a few times).
► A man is pounded on the back and his face hits a cement floor several times (we see abrasions on his face); then he is shot repeatedly (we see bloody holes in his shirt), and he falls back and dies. A man is blasted in the face by steam from a furnace (he screams in pain and we see a burned patch on his face).
► A woman hangs from her feet over a whirring garden machine with sharp blades, she struggles to free herself, a gun is pointed at her, and she whimpers and holds her hands to her face.
► A woman with a gun drawn leaves her house and strikes a small camera mounted on a car, and she opens the trunk of the car and finds a badly charred body. We see a badly charred body in a dark basement (can barely make out human features). We see a blood drenched body in the back of an SUV.
► We see the aftermath of a traffic accident between a car and a motorcycle: a body lies on the ground, partially covered by a jacket (no blood is visible).
► A kitten walks onto a board covered with glue, a bright light shines on it, it meows loudly and we later see it, on video, writhing and then lying still (it is dead).
► We see someone inside a car being tasered (we hear the crackle and see a bright flash of light).
► Armed police and FBI agents break down several doors and search through homes in a few scenes. An FBI agent with a gun drawn enters a dark hotel room, searches it, finds nothing and leaves.
► We see the frightened and grief-stricken family members of a man who was abducted and murdered. People watch in horror as people are tortured and killed.
► A woman fearing for the safety of her young daughter charges out of her home with her gun drawn (the child is fine).
► A woman driving a car struggles to move the car to the side of the road after the car loses power (she does not crash).
► A man talks about "men doing things to women that other men would pay to watch." We hear that a man committed suicide after becoming depressed over the death of his wife. A man is told, "the whole world wants to watch you die." A man talks about executions being broadcast for sale. An FBI agent refers to people watching online as a journalist is beheaded. We hear that a young man died from not taking his insulin. Someone refers to a "tortured kitty." A website is called "sickntwizted." We see the home page of a website called "Kill With Me" several times and it features an x-ray image of a human skull. An FBI agent talks about being approached by a retired principal while posing online as a young girl. We hear that a man (police officer) was killed in the line of duty.
► We see something floating in a jar in a few scenes, and we see a snake coiled in a jar filled with liquid.

SUBSTANCE USE - A man takes a drink from what could be a can of beer.

MESSAGE - The Internet can be abused to feed the baser instincts of humans. 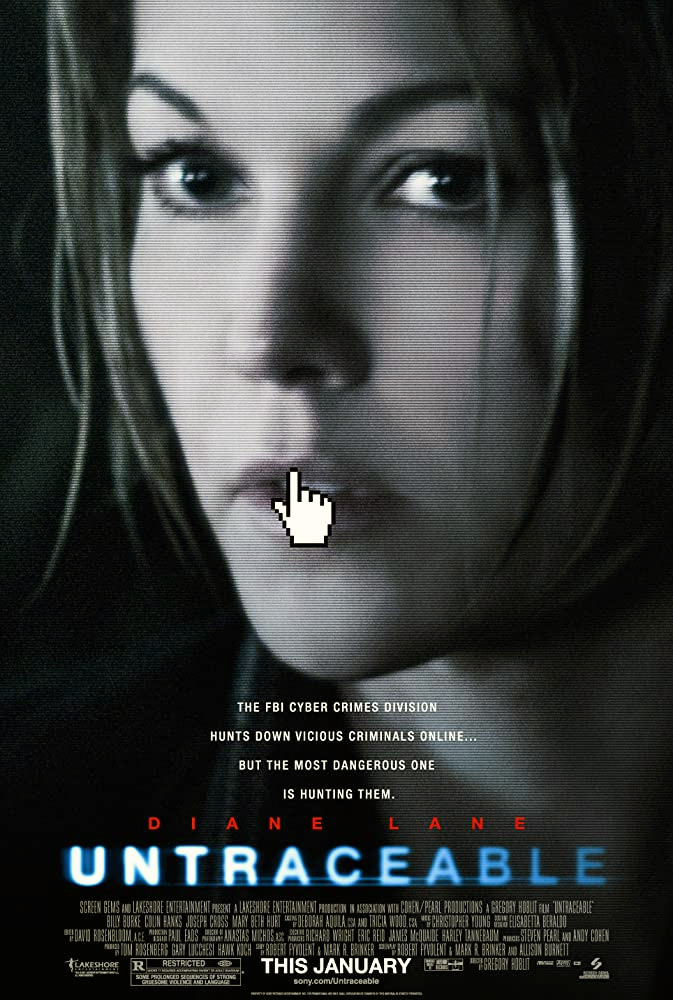