Film adaptation of United Airlines flight 93, which on 9/11 was hijacked, and the plane was going to be crashed into a Washington, D.C. target. But unlike the two planes that crashed into New York's World Trade Center and the one that crashed into the Pentagon, Flight 93 did not reach its intended destination when some of the passengers attacked the hijackers. The plane instead crashed in rural Pennsylvania, killing all onboard. With Opal Alladin, Erich Redman, Ben Sliney, Susan Blommaert and Peter Hermann. Directed by Paul Greengrass. [1:51]

SEX/NUDITY 2 - A man shaves his chest and abdomen (we see his bare legs and back). We see a poster of women wearing low-cut tops that reveal cleavage. Many people call loved ones and express their love for one last time.

VIOLENCE/GORE 7 - A man is slashed on the side of the neck, on his carotid artery; blood spurts and gushes from the wound, and people around him scream and panic.
► A man is stabbed in the stomach (we hear a groan and yelling). A woman is held by a man, she screams and struggles, the man kills her with a knife (off-screen) and we hear her scream turn to a moan and then she is silent.
► Several men charge toward another man, they knock him down to the ground, beat him repeatedly, and we see blood on his shirt and it is implied that he has been beaten to death.
► A man attacks another man, holds him around the head and throat and twists, breaking his neck.
► A man grabs a badly wounded man and hits him in the back (the wounded man has blood on his throat and chest and lies still on the floor).
► A man struggles with another man and one is killed (presumably stabbed because we see his bloody shirt later). Two dead bodies are dragged out of the cockpit of a plane and we see their blood-soaked shirts.
► Several men slam a serving cart into a cockpit door repeatedly, they break the door open, a man flying the plane is attacked and he and another man struggle over the controls; the plane dives toward the ground and the screen goes black (we are told that the plane crashed and no one survived).
► A plane dives, and passengers are thrown around violently and they scream. A man flying a plane forces the plane to descend rapidly, the passengers are thrown around the cabin and they scream.
► We see TV news reports of two planes being flown into the World Trade Center towers (there are large explosions and clouds of black smoke). We see TV news reports of the Pentagon being struck by a plane and we see pictures of smoke billowing from the building.
► A woman is held with a knife to her throat by a man who pushes her toward an airplane cockpit door. Passengers on a plane are forced to the back of the plane by men with knives and one has what appears to be a bomb strapped around his waist. Men prepare for a terrorist attack by arming themselves with small knives.
► A woman tries to help a man whose throat has been slashed, and she applies pressure to the wound (blood is all over the victim and around him and the woman's hands are covered with blood).
► Passengers on a plane arm themselves with forks, knives and a fire extinguisher, preparing to attack hijackers.
► There are many scenes of air traffic controllers trying to communicate with planes and not hearing back from them. Two planes on a scope disappear (we learn that one has crashed into one of the World Trade Center towers and the other has gone way off course). Two planes on a scope look like they have crashed into each other (they are OK).
► Air force control center is on high alert and planes are called to "battle stations." A man goes into the bathroom on an airplane, unpacks items from a duffle bag (a battery, tape, wires and what looks like explosives), builds what looks like a bomb and straps it around his waist.
► An air traffic controller reports hearing strange voices in a cockpit and suspects a hijacking. We hear air traffic controllers talking about a plane having, "no tracking and no radio."
► A hijacker goes to the restroom on a plane, comes back out, appears agitated and argues with another hijacker.

SUBSTANCE USE - A few people are shown drinking from cups (it's not clear whether it is alcohol or another liquid).

MESSAGE - No one is safe from terrorism. True heroes exist. 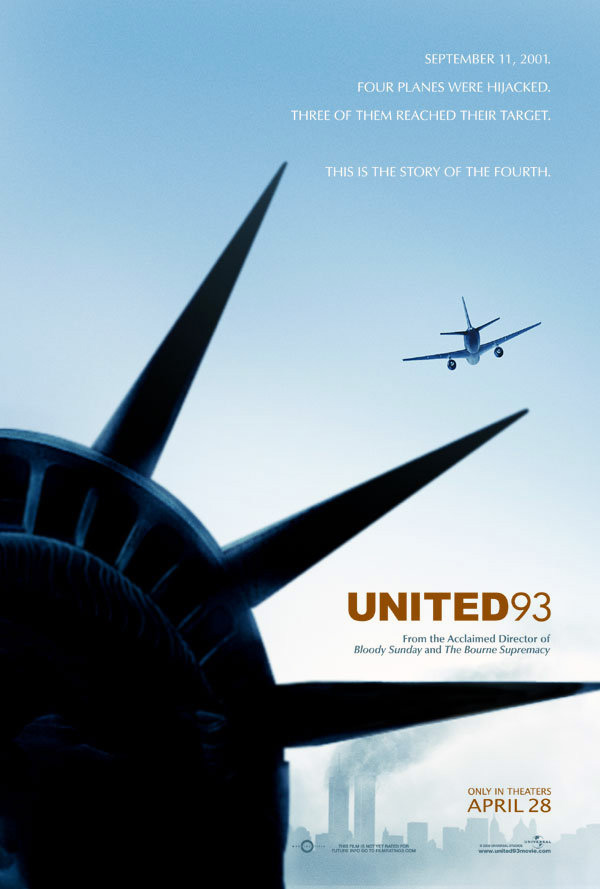