Why is “The Unforgivable” rated R? The MPAA rating has been assigned for “language and violence.” The Kids-In-Mind.com evaluation includes a sex scene with partial nudity, a murder by gunshot with bloody injuries shown, several fight scenes with bloody wounds and bruises shown, a kidnapping, a death during childbirth and a death by suicide, many arguments, and 32 F-words and other strong language. Read our parents’ guide below for details on sexual content, violence & strong language. A preschooler and her older sister (Sandra Bullock) are orphaned before the older sister kills the sheriff who tries to evict them from their home. After serving a 20-year sentence for murder, the sister determines to find her long-lost sibling (Aisling Franciosi), who went into foster care and she has to confront the foster parents (Vincent D’Onofrio and Viola Davis), kidnappers, and the legal system. Also with Jon Bernthal, Richard Thomas, Linda Emond, Emma Nelson, Tom Guiry, Rob Morgan, W. Earl Brown and Will Pullen. Directed by Nora Fingscheidt. [Running Time: 1:54]

– A man finds his baby alone in a crib, screaming, and when he walks into his bedroom he sees his wife (we see her bare back and buttocks) thrusting on top of a man wearing a sleeveless undershirt and jeans (we see his shoulders and upper chest); she screams, covers herself with a blanket, and her husband drags the man from the bed (please see the Violence/Gore category for more details).
► A woman is shown in a shower (we see one bare shoulder and part of her bare back).

– Flashbacks repeat several times with the sequence of events out of chronological order and they include the face of a screaming little girl, a shotgun firing off-screen into a dark room and a bright flash illuminating a man in the shadows, a man’s body lying on the floor in a pool of blood and with blood on his face, a teen girl and a sheriff shouting at each other on a phone and through a door, a teen girl threatening to shoot a sheriff who breaks into her house, a little girl carrying a shotgun off-screen and then hearing a gunshot, a teen girl and a little girl sitting in a diner with a bloody streak covering the little girl’s cheek, and a teen walking outside where she kneels on the ground and is arrested by several deputies.
► In a women’s restored citizens’ halfway house we hear constant screams, crying, and shouting; women push each other into walls hard several times, and four women in bunk beds live in a small room where one woman rifles through another woman’s belongings and the second woman grabs the first, slams her into a wall, and punches her head and body several times (we see no injuries). A man finds his baby alone in a crib, screaming, and when he walks into his bedroom he sees his wife thrusting on top of a man; she screams, covers herself with a blanket, and her husband drags the man from the bed, slams him to the floor, and kicks him in the face, chest, and stomach as the scene ends.
► Several scenes in a fish factory show people cutting heads off large fish with the bodies slit down the belly and we see a little blood and raw meat; a woman hits another woman on the back of the head, curses, and kicks her in the face and stomach when she falls and we see the fallen woman with bruises, a cut lip and a little blood on her face. A woman at a worksite swings a huge iron wrench at a man who shouts and ducks out of the way, they argue and he leaves.
► A man stalks a woman, and then his brother begins stalking her; he follows a teen girl and kidnaps her to an isolated quarry building, he calls a woman and we hear the girl scream and cry over the phone as the man says he is holding a gun to her head and will kill her as we see the teen lying on a cement floor, crying and with duct tape covering her mouth and binding her wrists; the woman enters the building, the man points a handgun at the teen girl and then at the woman, and a woman outside calls the police, they arrive and arrest the first woman and the man.
► A young woman neglects to take her unnamed medication, passes out while driving, and is struck broadside; we hear a crash and see a car strike the woman’s car in an intersection and we later see the woman in a hospital bed with many bruises, a few cuts on her face, a sling on her arm and we hear that she is suffering from a concussion and that she has had recurring nightmares for years.
► We hear that a five-year-old girl shot and killed a sheriff, forgot the incident, and suffered nightmares into adulthood. We hear that a woman’s mother died in childbirth and her father later died by suicide, leaving two orphans. A wife argues with her husband and curses at him. A woman curses and argues with another woman until the second woman cries and becomes almost hysterical. A man and a woman argue with another woman for several seconds and the man and the second woman curse, charge at each other and shout until another man breaks up the fight. In two scenes, two men argue for several seconds about killing a woman. A woman cries because she and a man she likes are both restored citizens and they could go back to prison for associating with each other.
► A woman at a worksite slams a drill through a wall of drywall several times, kicks holes in it, and breaks a large floor lamp and a floor fan. An elderly woman whom we hear never stopped drinking heavily, lies in a bed at home, unconscious, with an oxygen mask covering her nose and mouth; a man empties a urine bag filled with clear fluid from a catheter off-screen and we hear a toilet flush. In a long shot, we see a figure covered in dirty clothes and an oversized coat, pulling trash out of a dumpster.

The Unforgivable SUBSTANCE USE

– A woman says she is not taking her medications, a man says a doctor gave him some medication, a man asks a woman if she is using drugs and she raises her sleeves to show an absence of track marks, and a woman in a prison cell removes rubber tubing from her arm (implying drug use that we do not see). A woman sips wine at home, and many men and women at a party hold beer bottles and one man sips from a bottle of beer. A man smokes a cigarette in a yard, and a man smokes a cigarette on a sidewalk.

– Taking the responsibility for someone else’s crime can create many problems. 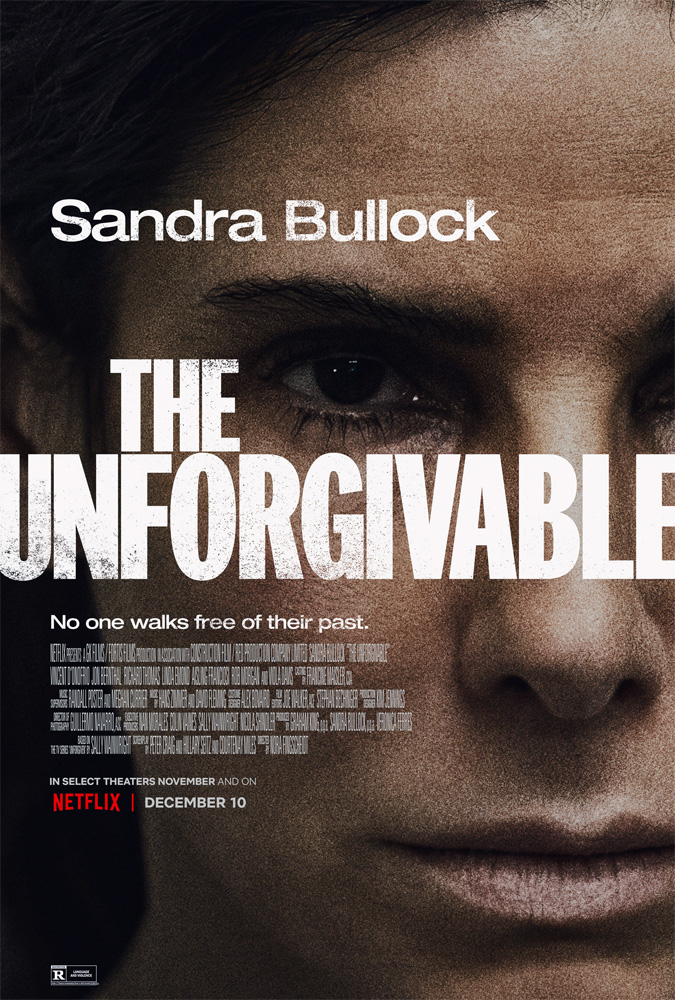