Robert Redford stars as a man who, having lost his only son in a car accident a decade earlier, is satisfied to spend the last of his days in a rundown Wyoming ranch. He cares only for his friend and handyman (Morgan Freeman) who was mauled by a bear and requires daily medication to overcome the pain. When his daughter-in-law (Jennifer Lopez), whom he blames for his son's death, arrives with his granddaughter (Becca Gardner), he is forced to confront his feelings of hatred and anger. Also with Josh Lucas. Directed by Lasse Hallstrom. [1:40]

SEX/NUDITY 5 - A man and a woman have sex in a car: we see the woman thrusting on top of the man from a distance, and she appears to be wearing a bra and we hear them moaning.
► Two men make a crude sexual remark to a woman in a restaurant (telling her to lie on the table). A girl asks two men if they are gay. A man talks about the sea tasting and smelling like a woman.
► Throughout the movie a woman wears low-cut tops that reveal cleavage. A man rubs oil on another man's back in several scenes (it is treatment for scars). We see part of a man's bare buttock when he is receiving an injection. We see a man's bare chest in several scenes (he's in bed or getting dressed or getting undressed).
► A man holds a cat up in the air to see what sex it is.

VIOLENCE/GORE 5 - A man and a girl try to get a bear into a cage on the back of a truck, but the bear escapes: it approaches the man, rears up, and swats the man to the ground, rears up again and is frightened off by the girl honking the truck's horn (the man is injured and we see a bruise over his ribs at the hospital later).
► A man drives into a driveway, gets out of the car, grabs a woman by the arm, she punches him in the face, and he punches her back and she falls to the ground; he then grabs a girl and forces her into a car, but another man shoots a warning shot in the air, then shoots out a tire and the engine, breaks a car window, pulls the man out by the hair, knees him twice in the face, slams his head on the car door (we hear a crunch) and the man falls back into the car unconscious (we see him later with cuts and bruises on his face).
► Two drunken men in a restaurant make crude remarks to a woman, one lassoes her with a rope, pulls it tight and yanks her onto his lap, and another man hits them both in the face with a coffee pot (we see them later with bloody bruises).
► A man tells another man to leave or he will kill him. A man yells and kicks a table (a woman and a girl jump and are frightened). A man and a woman argue, the man grabs the woman's arm and she pulls away.
► A man has deep scars on his face, back and legs from a bear attack. A girl reacts with fear when she sees a man's badly scarred face. A woman has a bruise on her face from a man having hit her.
► A man accuses a woman of killing his son. A woman talks about having fallen asleep at the wheel of a car and rolling 6 times (a man died in the accident). A woman talks about her young daughter drowning in a river. A man talks about having fallen down drunk when another man was being mauled by a bear. A girl talks about her mother's boyfriends being abusive, both physically and verbally. It is implied that a man has inflicted physical abuse on a woman and her daughter.
► Two men argue and a man yells at a woman. A man gets angry and breaks a chair against a pole. A man gives another man injections in his buttocks several times. A girl gives a man an injection in his buttock.
► A bear strolls through a town and people react with fear; a police officer drives his car behind the bear forcing it to leave the town, and another man takes aim at the bear with a gun but is stopped before he fires. A bear approaches a man standing in a road, the bear growls, snorts, claws at gravel throwing it around, and the man stands very still while the bear walks away. A bear is sedated, taken in a truck and placed in a cage in a zoo where it claws at the fence and growls.
► A girl talks about a boy eating a moth and that she heard the crunch when he chewed it. A bear eats pieces of raw meat.
► Two men are drunk early in the morning and swagger into a restaurant. A man reports someone shooting up clay statues in his yard (we see shattered plaster statues). A man drives a truck through a chain and steals a cage.

MESSAGE - Forgiveness can help to ease the pain of loss. 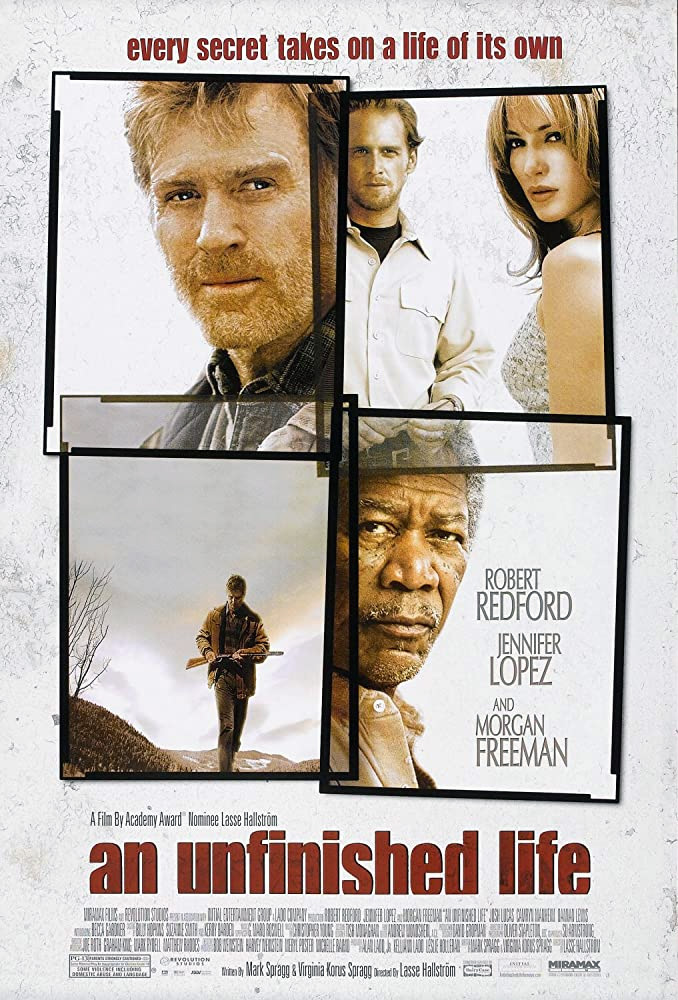