A klutzy ex-police dog acquires super powers when it is given a serum. It then befriends a young loner whose mother recently died and his father disappointed him by quitting the police force, and together they try to thwart the plans of a mad scientist. With Alex Neuberger, Peter Dinklage, James Belushi, Jason Lee and Amy Adams. Directed by Frederik Du Chau. [1:24]

SEX/NUDITY 1 - A man and a woman kiss, and two dogs flirt. A female dog imagines being with a dog that she has a crush on.
► A male dog says to a female dog, "If you ever want to be with a real dog, give me a sniff." A dog returns home in the morning and when a boy asks where he's been he says, "I don't sniff and tell." A male dog talks about how he attracts female dogs by dragging his "butt" on the ground. A female dog asks a male dog if that was his best "pick up line." A male dog talks about meeting a cute poodle and then realizing it was male.
► A man flirts with his reflection in a mirror. A man dresses up as a woman in order to be a decoy.
► A male dog with super powers flies with a female dog, and she touches his paw and nuzzles his neck.
► Romantic music plays as a male dog watches a female dog run toward him and they sniff each other briefly.


VIOLENCE/GORE 3 - A man grabs a sword and swings at a dog, the man throws a large shield in the air like a Frisbee, the dog tries to catch it, it is thrown into a statue and falls to the floor (it's OK).
► Growling dogs surround another dog, they fight, one is thrown into a statue (the statue crumbles and the dog falls unconscious), and the others (which have super powers) run around the ceiling of a building.
► A dog knocks a man into a wall breaking a hole in it, throws another man back onto a glass display case and another man runs away. A dog drags a man, who's holding its leash, along the ground and sidewalk, and the man is slammed into a fire hydrant and through a glass bus stop shelter. A dog causes a garbage can lid to be flung and a man is struck in the head; then a fire escape ladder is dropped down and lands on another man, stopping the two men from robbing a girl.
► A dog digs a deep hole and buries a bomb, the bomb explodes as the dog is making its way out of the hole, flames and the force of the explosion send the dog high into the air and into space (the dog is unconscious); the dog then falls back to earth (we see flames on its back as it re-enters the atmosphere), it crashes to the ground, we see it motionless and smoldering in a hole and boy picks it up thinking it is dead.
► A dog is struck by a car, we see the large dent on the car's bumper and the dog whimpers from underneath the car.
► A man approaches a man in a threatening manner and orders his growling dogs to attack him. A man is tied to a chair and threatened by a man and then three dogs, which bark aggressively at him.
► Several men rob a jewelry store and hold people hostage while police surround the building with guns drawn.
► A dog bites a car bumper and pulls back, preventing the car from speeding into children at a crosswalk. A dog lifts and flips a sofa over, breaking a nearby table and spilling what was on the table. A dog barks and cracks a window and a man's glasses. A dog charges through a closed door making a hole in it a couple of times. A dog flies through a police car stealing a donut and causing the officer inside to spill his coffee.
► A man prepares to inject a dog with a large needle, the dog sneezes, the man is distracted, and the dog runs around the laboratory causing shelves filled with vials to topple and spill on it; we see a glimpse of the dog's skeletal structure as it changes when a serum enters its bloodstream and a large screen falls from the ceiling and pins a man.
► Three angry dogs surround a man, and they bite and pull on his clothing. Three dogs threaten another dog, the dog barks at them and the fur is blown off one dog and they run away.
► Blood from a dog is shown in a syringe, and the dog is given a pill and its super powers are taken away. We see a man with burn scars on his head and face after an accident in a laboratory.
► A man dressed as a woman hangs from window sill outside a building, a dog with superpowers flies toward the man, who falls and the dog catches him and places him gently on the ground. A dog grabs a boy by the hood of his sweatshirt and flies with him.
► A dog flies through traffic on a busy city street, bouncing off doors and causing cars to swerve, it flies past a newsstand throwing papers in the air and takes a tight turn around the corner of a building knocking some of the bricks off; it then flies through an office building leaving holes in walls, dividers and windows.
► A dog sneezes and is thrown into some bushes (he's OK). A dog squeezes a can of chili in its mouth spraying the contents on a cabinet and a wall. A meatball rolls of the roof of a building and we hear a cat screech below.
► A meeting room is cleared of people when a dog signals that it smells a bomb, and a bomb squad searches several crates (there was no bomb). A girl and a dog are tied to the roof of a building next to a bomb that is set to explode.
► We see several dogs locked in cages in a laboratory and one is frightened when talking about "the guy in the white coat with a big needle." Three dogs threaten another dog in several scenes. A dog chases a cat up a tree.
► A dog complains that a boy is being demeaning. Three dogs tease another dog about making a mistake.
► A father and son argue in a few scenes. A dog says that it hears a woman telling a man that he "can go eat..." and the dog is alarmed that "people eat that too." A dog talks about chasing its tail, and throwing up and "bingo, there's lunch part 2." A dog talks about having chewed on an electrical cord that was still plugged in. A dog talks about a boy urinating in his drinking bowl (meaning the toilet).
► When a boy realizes that a dog is talking and he can understand what the dog says, he screams, and so does the dog. We see a fox stole on the floor and a dog tries to revive it. A dog licks a boy on the face and the boy complains about the smell.

MESSAGE - The only way to be a loser is to quit. 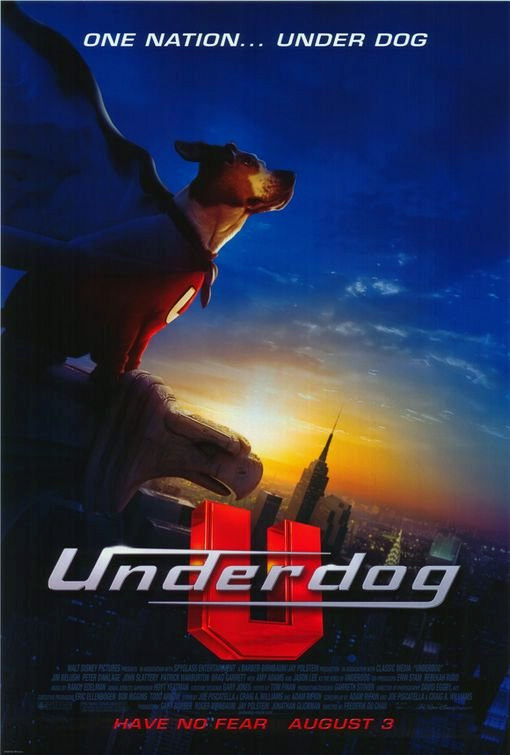