After defeating their arch nemesis, The Shredder, the four brothers have grown apart and are trying to forget about the good old days when they worked together to stop crime. But when an industrialist puts the final piece of an ancient puzzle together, and one of the brothers is snatched, the rest of the turtles must reunite to save him. With Patrick Stewart, Sarah Michelle Gellar, Ziyi Zhang, Chris Evans and Mako. Directed by Kevin Munroe. [1:26]

SEX/NUDITY 1 - A man and a woman kiss, and a man kisses a woman on the cheek.
► The female characters' figures are exaggerated with abundant breasts, narrow waists and full hips. A woman wears a low-cut top that reveals cleavage, and a woman wears a very tight-fitting outfit and a man admires her.

VIOLENCE/GORE 3 - Many warriors fight: we hear slashing with swords and yelling, and we see bodies thrown through the air. Four turtles fight with many warriors using swords; we hear clashing and clanking and see bodies falling and being thrown through the air. Turtles fight with monsters (the monsters have long sharp teeth and glowing red eyes).
► We see 13 monsters -- very briefly: they appear to have fur and sharp claws, and are being released from a large glowing portal; the monsters then attack everyone they come in contact with (we hear growling and loud thuds and rumbles) and leave only one man standing.
► Two turtles fight with kicks and punches and then with swords and knives until one is held on the ground by the other, with a sword near his head. A turtle is attacked by warriors who inject him with a dart that puts him to sleep.
► Two soldiers with guns are taken away by something in a thick forest; one is pulled into the air by a rope and the other is pulled over a fallen tree.
► A soldier runs through a thick jungle, he slashes with a machete, he is confronted by a turtle, and they run toward each other and the scene ends. A woman cuts her way through a thick jungle using a machete, she falls into a hall and is caught before hitting on the ground.
► A man robbing a store is grabbed and pulled onto a rooftop, he is then punched in the face by a turtle and we see him dangling from a light pole with a chain around his ankle. An explosion blows a hole in the wall of a bank, robbers with guns leave the bank, and a turtle on a motorcycle chases one, after attacking the others and leaving them bound by a chain and hanging upside down from a fire escape.
► A small, red creature fights with a turtle: the creature bites the turtle's hand, it head-butts him, slams him in a fridge door, and then the creature swallows three smoke pellets and runs around the room and out of the building. A warrior scales the wall of a building to get to a turtle, the warrior's eyes glow red and he snarls, but he is scared away by a police helicopter.
► Several monsters are sucked into a spinning vortex that pulls them up into the sky, there's a bright flash and the vortex disappears.
► A large winged creature flies over rooftops, and it is snared by warriors on the ground and pulled down by ropes (we see the creature with darts and ropes in its body); a dumpster is tipped over and on it to subdue it.
► A man opens a walk-in freezer, screams and backs out of the room, and we see a small, red, horned creature with many large teeth and a pointed tail eating food frantically.
► A man begins to glow, he levitates off the floor, spins around and disintegrates. Several stars in the sky line up and shoot a beam of light toward the Earth; the light swirls and a stone structure begins to move.
► A soldier throws a woman on the ground, threatens her, pulls off a necklace and drives away. A man is thrown over a balcony, and he lands hard on the ground below (he is unconscious for a brief time but he's then OK).
► Several warriors enter an office, and they seem threatening as they speak to a man.
► A turtle jumps from a plane, sails through the sky, sprouts wings and flies. A turtle races on a motorcycle. Four turtles jump and swing across rooftops. A turtle skateboards through a sewer drain and nearly runs into a subway train and a spinning exhaust fan. A woman drives a van recklessly while being chased by a monster. A turtle lies unconscious and has a piece of a broken blade in his shell.
► A man knocks over a priceless vase and it shatters on the floor.
► A turtle burps loudly. A remark is made about something smelling like a monkey cage.

MESSAGE - Anger can cause you to lose sight of what is important. Not everyone can be a good leader. 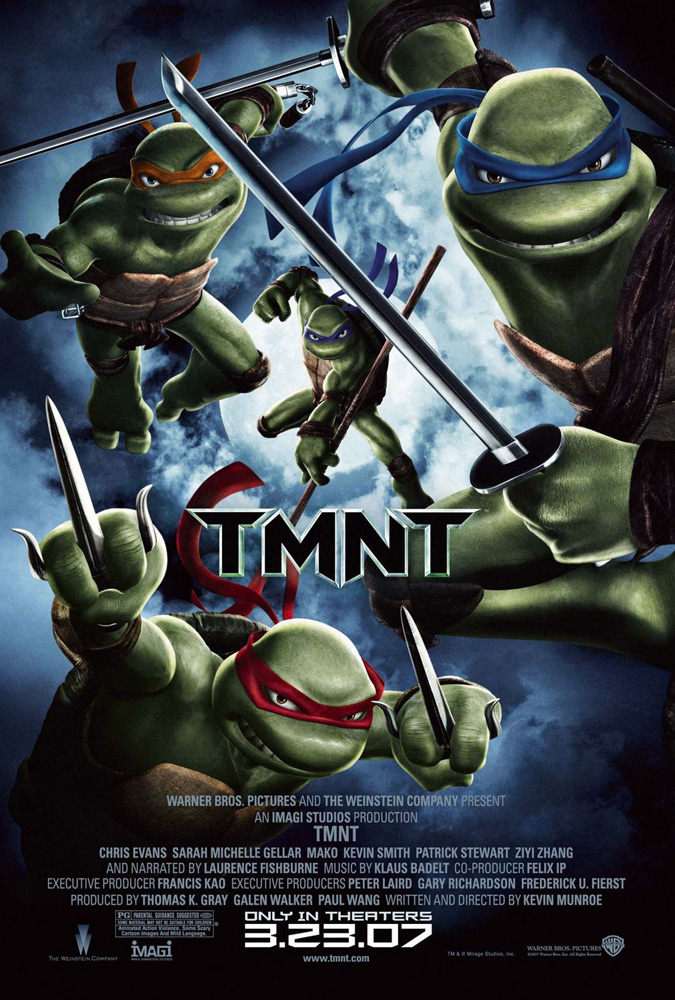