Tommy Lee Jones directs and stars as Pete Perkins, a ranch hand in a small Texas town, who befriends a Mexican man who is soon murdered. True to his dead friend's wish, Pete takes the body to Mexico for a proper burial. And when the local sheriff is not interested in pursuing the case, Pete decides to solve it himself. Also with Julio Cedillo, Vanessa Bauche, Dwight Yoakam and Barry Tubb. [2:01]

SEX/NUDITY 7 - A husband lifts his wife's skirt, he unfastens his pants, she leans over and he thrusts and moans.
► A man and a woman sit on a couch, she is nude (the side of her bare breast, her bare hip and abdomen are visible), the man is nude too (with a pillow covering his genitals) and they talk about his inability to become aroused.
► A man touches a woman's clothed buttock, and then slips his hand up her skirt -- while the woman's husband watches from another room -- and the man and woman make arrangements to meet somewhere for an illicit rendezvous.
► Two men take two married women to a motel, and each couple enters a separate room: one couple sits on a bed talking, the woman turns on the TV and finds pornographic channels (we see women's bare breasts briefly, we see a man's hand caressing a woman's bare breast and we hear a woman moaning loudly) and then the man and woman dance together.
► A woman wears a bikini top and short shorts and she leans over her car while washing it, a woman wears a low-cut top and a short skirt that reveal cleavage, bare shoulders and bare legs, a woman wears a short top and shorts that reveal cleavage, bare abdomen and bare legs, and a woman wears a bikini while sunbathing. A man is shown bare-chested.
► A man looks at a pornographic magazine in a couple of scenes (we see women's bare breasts) and in one scene he unfastens his belt and reaches into his pants preparing to masturbate (he is interrupted by the sound of gunshots).
► A man sits on a couch with his pants around his ankles and a pillow over his genitals while a woman sits next to him. A woman kisses her dog on the mouth.
► A man talks about another man not having had sex in a while. A husband tells his wife that she is his, "red hot mama."

VIOLENCE/GORE 7 - A dead man lies on a table in a morgue: other men in the room gag and vomit because of the odor, we see the dead man with bloody stains on his face and mouth and a bloody wound on his abdomen. A man kneels next to a dead body with blood on its face. We see a dead body in several scenes becoming progressively more decayed (a man tries to comb the hair and a clump comes out on the brush).
► A woman cuts a man's foot where it has become swollen with poison from a snakebite; the man screams and passes out, and she talks about the possibility of gangrene setting in. A woman pours hot coffee on a man's lap and hits him hard in the face with the pot, breaking his nose.
► A man is bitten by a rattlesnake, we see the snake hanging on as the man screams and flails, and then the man pulls the snake off and beats it with a rock until it is dead. A coyote is shot by a man from a distance (we see a motionless ear and head). A coyote lies on the ground whimpering and twitching after having been shot.
► Ants crawl on a dead body, a man tries to remove them, and he man is pinched by the ants; he then pours alcohol on the body, sets it on fire and then puts the fire out. A man smears a dead body with anti-freeze, and then pours some of the liquid into the mouth of the body. A man digs up a grave, opens the top of the casket, gags from the smell, pulls out a body, lifts it up, he falls, and the body falls on top of him in the grave and he screams. A dead body is sprinkled with something, wrapped in blankets and placed on a mule's back. We see a dead man being dragged by the shoulders into a hole in the ground. A man digs a grave, two men place a body in the grave and cover it with dirt. A man wakes up in a cave and reacts when he sees a decayed dead body sitting next to him.
► A man shoots at a coyote three times: the coyote is hit by one shot and falls to the ground, and then the man is shot and falls to the ground, coughing blood from his mouth. A man is shot from a distance and he falls back onto the ground.
► Several men and women come across the Mexico-Texas border and are stopped by border guards; one man and one woman run away, a guard chases them, tackles the man, handcuffs him, and punches the woman in the nose breaking it -- we see blood on her face. A man opens his front door, another man shoves him back into his house, hits him with his gun, puts handcuffs on him, takes him outside, and slams his head onto the hood of a car. A man punches a man in the mouth, and he bleeds and spits blood from his mouth.
► Three horses and a mule walk along a very narrow trail with men and heavy packs on their backs; the mule kicks and brays, a horse behind it rears up, backs up and off the edge of a high cliff, and we see it falling and hear it crash on the ground. A horse falls over on a hill of sand and pins its rider briefly.
► A woman is bound and gagged and a man threatens to kill her husband if she calls the police. An unconscious man that's slung over a horse wakes up, bites the rider on the leg, jumps off the horse, and is lassoed by another rider and dragged through water.
► A man pulls a hunk of raw meat from a dead bear (we hear that other men killed it for killing their goats). A coyote tugs on something behind a rock formation (we find out later that it is a dead man's body).
► A man shoots a gun all around a man, who cringes and cries. A man threatens a man with a gun in several scenes. A man takes aim at two men on horseback but does not fire.
► A man reads an autopsy report that details how a bullet wound killed a man and how long it took him to die. A man asks two men to shoot him.
► A man gets anti-freeze in his mouth while trying to start a siphon. A man picks his toenails with a knife.

SUBSTANCE USE - People are shown drinking alcohol in a bar, several men drink alcohol from a bottle, and a man drinks alcohol. Two women smoke in many scenes, and a man smokes.

MESSAGE - Promises are meant to be kept no matter how complicated. 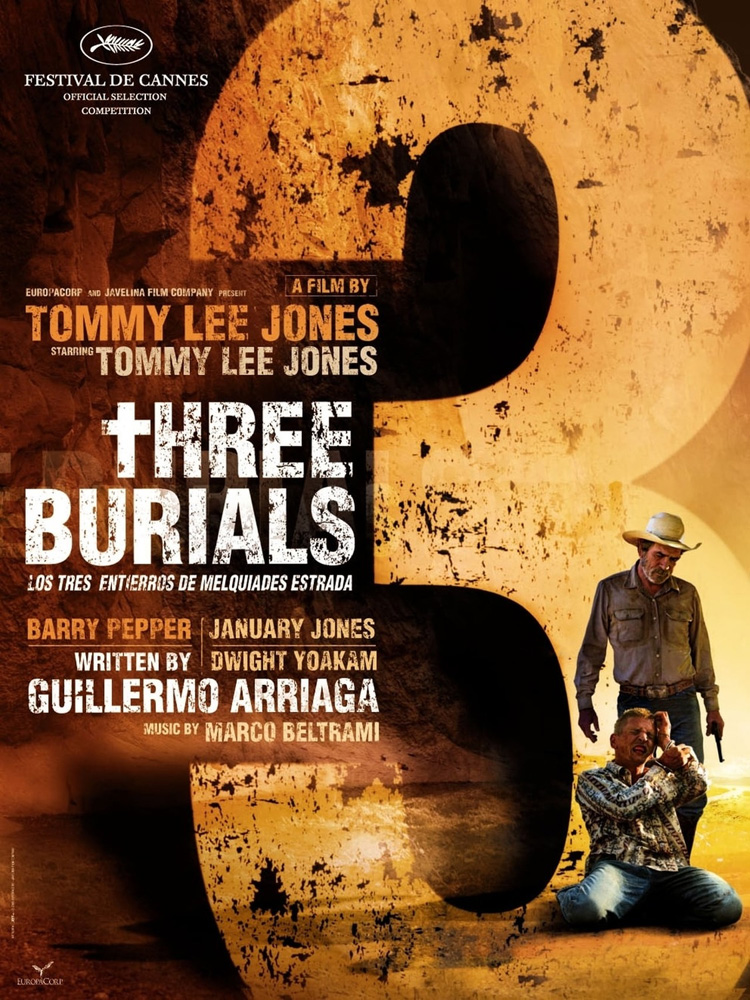