Jack Black and Kyle Gass star as two musicians calling themselves Tenacious D. Down on their luck, they are desperate to win a talent contest and believe that they need to find a guitar pick that will make it impossible for them to lose. Also with J. R. Reed, Fred Armisen and Ned Bellamy. Directed by Liam Lynch. [1:33]

SEX/NUDITY 6 - A man's genitals swell and protrude from his pants to press a button on a wall (we see the protrusion wrapped in cloth that looks like underwear).
► An older man admires three young women as they look at him flirtatiously (they wear outfits that reveal cleavage, bare abdomens and legs). A woman wearing a low-cut dress that reveals cleavage smiles at a man and he winks at her. A woman wears a bikini that reveals her ample cleavage and a man admires her. A young woman lifts her top to reveal her bare abdomen and bra to a man. We see a poster of two nude women with their arms covering their breasts (their bare buttocks are visible) and we see a picture apparently representing Adam and Eve nude from the waist up (his bare chest and her bare breasts are visible).
► A man pulls down his pants and we see his bare buttocks, and then another man does the same. We see a drawing of two men with the backs and wings of geese (their bare buttocks are visible as they fly away).
► A man plays a guitar with two necks that are painted to look like a woman's legs with panties at the middle, and the man sticks his tongue out and pretends to lick the panties. A woman thrashes with sexual pleasure while listening to two men play music. Three young women flirt with an older man.
► Satan shows up and thrusts his hips, wiggles his tongue suggestively and sings with lyrics about having sex with a man.
► A man tells another man that he must practice doing pushups using only his genitals. Using crude terms, a man tells another man that a young woman wants to have sex with him. Two men talk about sex and rock-and-roll, and that they are synonymous. Two men talk about partying and having sex in several scenes.

VIOLENCE/GORE 5 - A man's head blows up and his brain splatters on people that are seated around him in a bar.
► A man lies on a bench at night, and four other men approach him and attack him with metal pipes and a guitar (he ends up with a bloody nose).
► Two security guards shoot at two men who are running away.
► A man speeds in a car, and police chase him; the car drives off a road, crashes into a newspaper stand, goes down a flight of stairs, over a ramp, and flips and explodes (the occupants of the car are OK).
► Satan (he's a large, red, horned creature) sprouts out of the ground, it threatens two men, and they argue and compete with each other.
► Satan shoots a green light at a man that is reflected and slices a horn off Satan's head. A wizard fights with Satan: snakes sprout out of the ground, and a man throws a piece of metal striking Satan in the mouth and breaking off a tooth.
► A father whips his son on the buttocks with his belt (the boy cries). A man is struck in the head with several bottles that break (he is wearing protective goggles and a helmet).
► A man with a knife verbally threatens two men, using graphic terms; the man then throws the knife at the men and they run away (neither of them is injured).
► A man sings about demons (flames dance behind him) and we see pictures of demons in several scenes. A man imagines running alongside Sasquatch.
► A man imagines floating down a fast moving river, but he's actually sitting on a tree and falls down, crashing hard onto a branch and hurting his crotch.
► A man throws a cup at a man's head. Two men wrestle over a remote control, and one pulls the other's wig off. Two men in an air vent fall when the vent breaks loose. A man falls off another man's shoulders, and both men slide down a flight of stairs on a large box speaker. A man slides on the floor on his knees, and he falls and lands on his guitar crushing it.
► Bullies tease a boy about being bald. Two men argue. A man says that a security laser cut his leg off. A man talks about poking another man's eyes out. A boy sings a song about killing a dragon and praising demons.
► A man sits down and we hear his bones cracking (he is very dirty and has blackened teeth). Two cartoon characters flatulate and pass a green gas that shoots them across the screen (it's a sound check prior to the main movie feature). A man sits on a toilet and we hear loud flatulating, splashes and trickles.

SUBSTANCE USE - Two men smoke marijuana from a bong, in several scenes, two security guards smoke a marijuana cigarette, a man eats wild mushrooms and begins to hallucinate, and two men talk about "some weed." A man drinks alcohol at a bar, and people drink alcohol in several bar scenes.

MESSAGE - Your destiny is what you make of it. 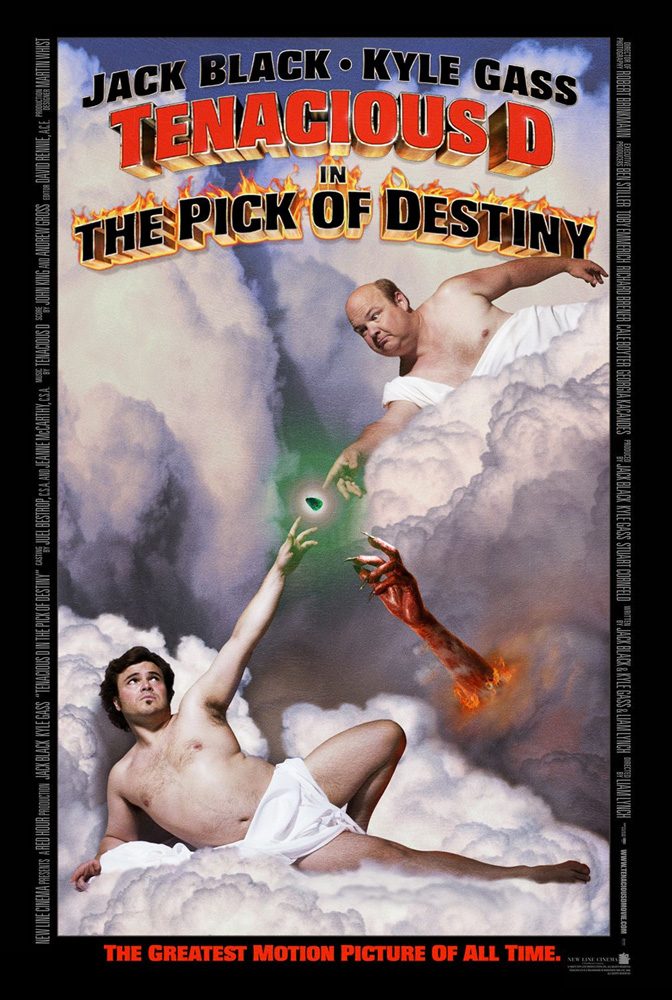