Based on real events: In 2010 a coal mining disaster in Chile trapped 33 men underground for 69 days. While their families campaigned for their rescue and camped in a nearby tent city, the miners' chosen leader (Antonio Banderas) encouraged them to stop fighting and ration supplies until their long-awaited rescue. Also with Rodrigo Santoro, Cote de Pablo, Lou Diamond Phillips, Jacob Vargas, Gabriel Byrne, Juliette Binoche, James Brolin and Martin Sheen. Directed by Patricia Riggen. Some dialogue is in Spanish, French and Middle Eastern languages with English subtitles. [2:00]

SEX/NUDITY 2 - A wife kisses her husband on the cheek. A man on a bus blows a kiss to a man walking along the road. A man and a woman outside a mine hug and kiss for several seconds. Several other couples hug for a prolonged period.
► A clothed woman is shown with a swollen belly, we hear that she is pregnant and we see a sonogram briefly; in a scene later she bends over in pain, groans, and grimaces, presumably in labor, refuses to go to the hospital and is later shown carrying her baby wrapped in a large blanket.
► A man hugs his wife from behind and says, "You have the best bottom." A man teases another man saying, "Hey, at least you could close the curtains at home." A man threads electrical wire into a hole in the rounded end of a metal tube in his hand, looks at his friends, and they all laugh, because the tube looks phallic. As materials are lowered into a mine bore hole for trapped men, one man calls out, "Hey, here are your dirty magazines" (we cannot see them; they are rolled up tightly).
► A miner has a wife and a girlfriend who both see him off on his bus; the girlfriend wears a top that reveals some cleavage and shorts that reveal bare legs to middle thighs. A woman pulls down the slacks of another woman and we see her rear end covered by opaque panty hose. Several men appear shirtless in a dozen scenes revealing bare chests, abdomens, navels, backs, arms and shoulders; as they run out of food after a mine cave-in, they become thinner and their ribs show. A few scenes show women wearing V-necked blouses that reveal some cleavage. A teen girl wears an off-shoulder shirt that reveals a bra strap. A scene featuring a mirage-like vision in a mine shows four women wearing dresses that reveal moderate cleavage and each woman kisses her husband on the cheek.

SUBSTANCE USE - Many men and women and teenagers toast the retirement of one of the male attendees with tumblers containing a few inches of amber liquid and they drink from their glasses, a man drinks from a pint bottle of clear liquor on a bench and on a bus as well as on a truck driving down a road in a mine and in a room in the mine, a man throws an empty bottle of liquor against a wall and breaks it, and a shaman blesses an engineer by sprinkling a clear liquor around him on the ground and wafting incense around his upper body.

MESSAGE - The survival of the 33 Chilean miners is an example to the world of humanity's capacity for caring and cooperation. 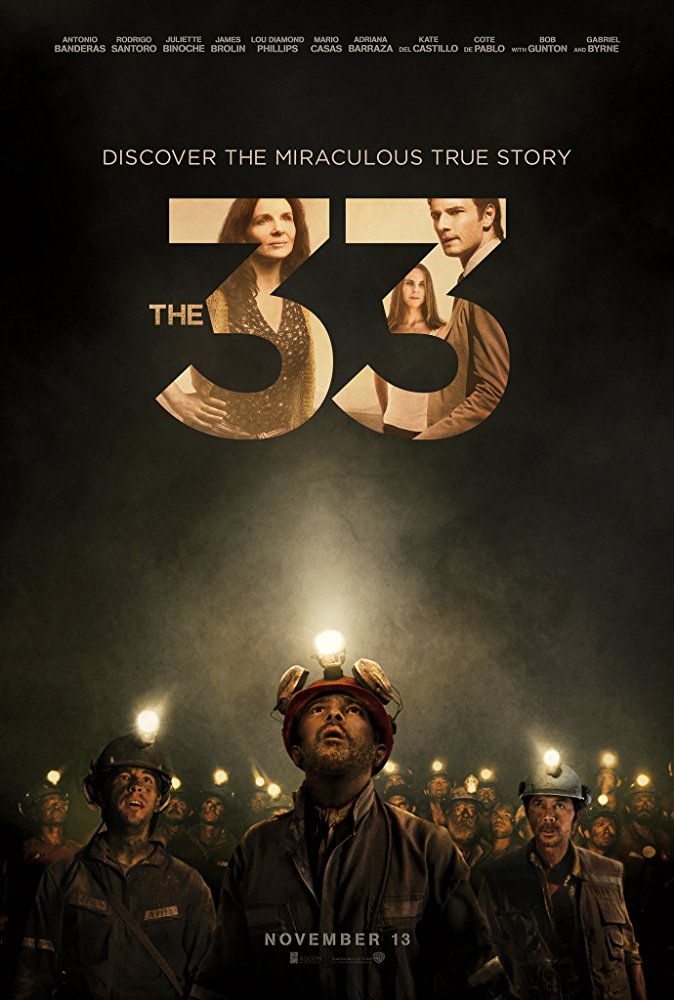