A virus that turns those infected into raging killers is accidentally released from a lab and spreads everywhere, decimating humanity. It requires only one drop of blood or fluid from an infected person to infect another. Twenty-eight days later four un-infected people try to leave London and head north after they hear a recording being broadcast announcing that there are other survivors. With Cillian Murphy, Naomie Harris, Megan Burns, Christopher Eccleston and Brendan Gleeson. Directed by Danny Boyle. [1:48]

SEX/NUDITY 6 - Men forcibly take off a woman's clothes (we see her bra and bare abdomen) and prepare to rape her. There are several scenes when men talk about a woman and a girl in sexual terms (one man says "I'm gonna make her squeal"). A man and a woman kiss passionately, a woman kisses a man, and a woman kisses a man on the cheek. We see a few women with bare breasts (they are infected and "raging"). A nude man lies in a hospital bed with tubes and wires attached to him (we see genitals, bare buttocks and chest). A nude man stands in a shower and we see his bare buttocks and back. We see a statue of a nude male with exposed genitals.

VIOLENCE/GORE 9 - When people are infected with the "rage" virus they vomit blood and goo, their eyes turn red and they become maniacal, trying to infect non-infected people. A boy jumps at a man hissing and growling and the man beats him to death with a bat. A man is hit with a bat and then shot repeatedly (we see bullets piercing holes in his shirt and he lies dead on the ground). Men break into a house, tackle a man, and another man hacks them to death with a machete. A woman hacks a man to death with a machete: he screams and pleads and blood sprays on the walls. A man is stabbed in the stomach by a bayonet, and a man is shot. A man and a woman are attacked by infected people: one infected man is hacked and beaten and thrown down a flight of stairs. A man is dragged out of a car and attacked. Many infected people charge toward a military encampment; they run through a mine field and are blown up into the air and others are shot down by men with guns. A man is attacked by two infected people and blood is splattered all around the room; another man is attacked by an infected man, they wrestle on the floor, the infected man vomits on him infecting him and he then runs through a building chasing others and screaming. A man fights with another man, he slams his head against a wall and drives his thumbs into his eyes (the man screams). An infected man is tied with a chain around the neck and he vomits blood and lunges toward two men who enter the yard where he is restrained. A woman holds a machete to a man's crotch, and a woman hits a man on the head with a vase. Rats swarm toward a group of people followed by many infected people. A man gagging and gesturing wildly approaches another man who hits him in the head and runs from a group of other people. A monkey lunges at a woman, knocks her to the floor, bites and gnaws at her neck, and the woman vomits blood and goo onto a man. A man hits a man in the face (we see a bloody gash). People throw firebombs at other people, two persons catch fire and flail around and a man ignites a gas main that explodes. Men in a truck shoot weapons all around a deserted station trying to hit a man hiding there. We see many infected people dying along a road -- they are starving to death. A man shoots many infected people charging toward him. Two men are chained to a radiator, and then are walked through woods (which are strewn with dead bodies) by two other men with guns; one man is shot and killed, and the other man runs away. A dead monkey lies on a table with its chest cavity splayed open (we see some bloody tissue and ribs). A crow tears and pecks at a dead body. People drive into a tunnel that is strewn with dead bodies and broken down cars. A man finds a large room full of dead bodies; it appears as if they committed suicide (flies buzz around and he reacts to the smell). A man walks into a diner and finds many dead bodies including an infant. A man finds a man and woman lying dead (their skin is tinged blue and they apparently killed themselves). Also many dead bodies lie on streets. A man talks about stepping on dead bodies while trying to escape. There is a film that shows people being beaten in streets, a man hanging, a man in flames wrapped with a tire, and people being shot. A man is hit in the face and he falls unconscious (he has a bloody nose and mouth). Monkeys in cages act frantically, screaming and jumping. A man yells at a woman, and a man yells at a girl. A girl hides and is nearly discovered by an infected person. There are several eerie and creepy scenes when a man walks through a deserted hospital and streets: cars are overturned, and we read a headline about a city being evacuated. A car crashes through a gate and the passengers are thrown around, and a car approaches a city that is in flames. A man has blood on a bandage covering his arm, and a man has a scar on his scalp. A man starts a siphon and gets gasoline in his mouth.

MESSAGE - The potential for deadly epidemics is very real. 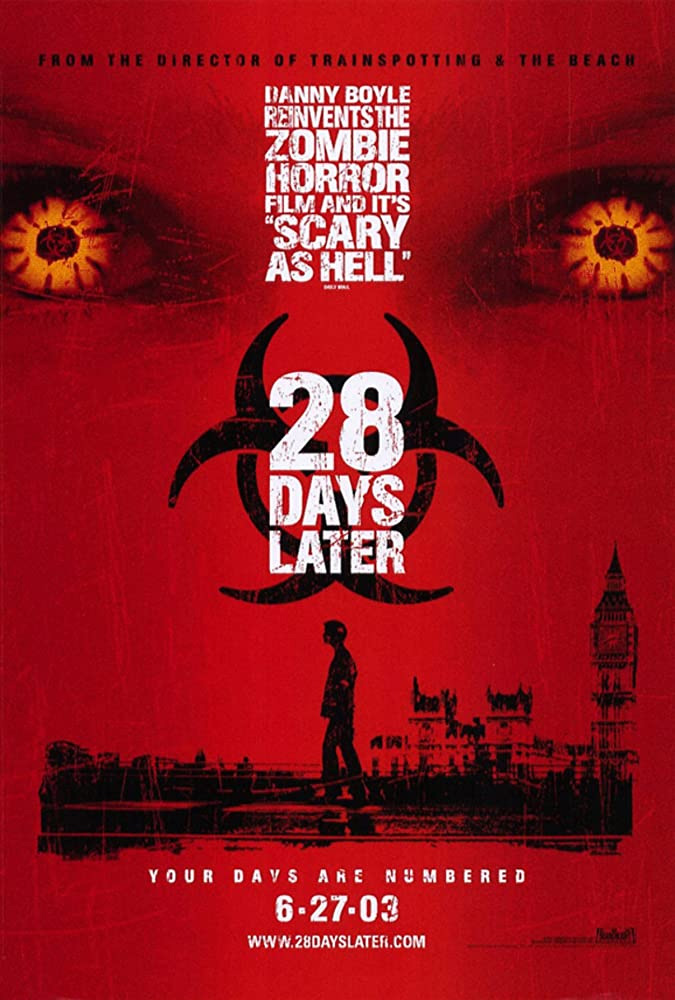