Sequel to the 1999 "Baby Geniuses" which put forth the premise that babies use a highly sophisticated language that allows them to converse about secrets of the universe, life, etc. This time the babies along with a legendary boy must save the world from a powerful media mogul (Jon Voight) bent on world domination. Also with Scott Baio, Vanessa Angel, Skyler Shaye, Justin Chatwin and Anastasia Trovato. Directed by Bob Clark. [1:28]

SEX/NUDITY 2 - A teenage boy and girl kiss. A teenage boy admires a girl's dress and says, "Wow" a couple of times. A teenage by and girl flirt. Two men are shot in the buttocks with glowing arrows from Cupid's bow; they turn to each other and say, "I love you man" and hug. A girl hugs a boy. Babies tease each other about being in love and kissing. A teenage girl wears a low-cut dress that reveals cleavage and bare shoulders. A woman wears a low-cut top that reveals cleavage. We see babies in diapers in many scenes. A man says to a boy (whose body was transformed from a man) that he will change his diapers.

VIOLENCE/GORE 3 - A boy flies a small helicopter over a playground and a crowd of people, he fires lasers into a satellite dish that bounces the rays back at him causing him to disappear. A sick man lies in a bed, he goes limp and dies. A boy jumps into the air and kicks several soldiers, he spins and knocks others down, he slaps one in the face, pokes one in the eyes, and kicks another in the face. A teenage boy punches a man in the face. Two men are shot in the buttocks with glowing arrows (from Cupid's bow). A man punches a man, a woman kicks a man in the crotch, a woman and a teenage girl fight and the woman is knocked to the floor. A baby in a ball suit bounces around the room knocking several men down (we see many unconscious men piled up on he floor). A boy fights three men with kicks, then backs a van into them and they are knocked to the ground. A man stomps on a man's toe, punches him in the face and he flips back onto a platform. A boy crawls across a ceiling, and drops on top of a man, knocking him to the floor. Two vans drive toward a teenage girl pushing a stroller with four babies in it, they chase her, and she runs. A boy slides a chair across a room, knocking a woman down and tossing her across a desk and onto the floor. A boy tosses a man across a desk and onto the floor. A boy is taken to an underground holding cell, placed on a pedestal and a cage comes down from above closing him in. A boy is shown in handcuffs and shackles. A boy flies a small helicopter off the roof of a building and through streets, and he is chased by men in three cars. A baby knocks two men into water. Soldiers with guns search for a boy. A boy climbs the outside wall of a building, pulling himself up along a tether. A boy climbs out a window and down sheets to the ground. A boy in fatigues and wearing roller skates attaches a cord the back of a truck and is pulled along. A man snarls at a baby and acts in a threatening manner. A man yells at a teenage girl, and a teenage boy argues with his father. A teenage boy spins and kicks a punching dummy. A boy is searched and many weapons are thrown on the ground. A storm breaks a glass window and two boys are frightened. A boy drinks a potion, we see green flashes under his skin and his muscles grow (presumably making him stronger). A man is zapped by a beam of some sort that transforms him into a boy. Two men get into Plexiglas tubes and slide down to an underground room. A baby says, "I was hoping I'd get to smack somebody." A computer image shows a picture of a man with horns popping out of his head and he sounds like he's growling. We see holograms of wild animals. A man complains of being sick and acts weak. A woman faints. A baby flatulates.

SUBSTANCE USE - People are shown drinking alcohol and smoking tobacco.

MESSAGE - Trust your heart and not your head. 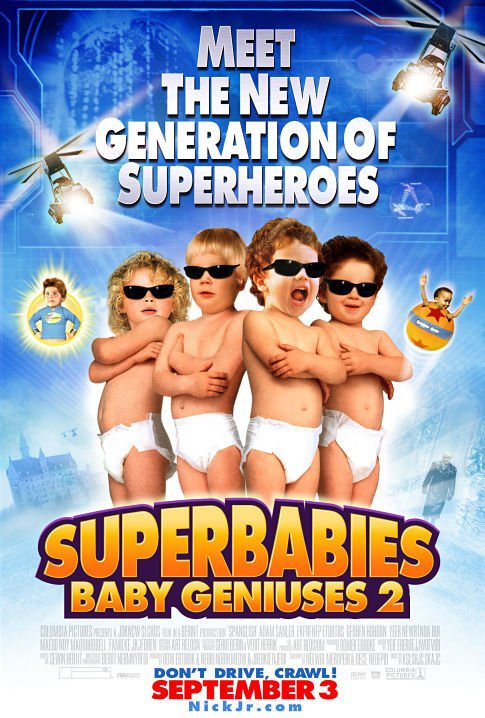