Two men (Paul Giamatti and Thomas Haden Church) embark on a week-long tour of California's wine country as a last adventure before one of them gets married. One has only plans for sampling the local wines and enjoying the scenery while the other has only plans of having as much casual sex as he possibly can. Things become complicated when they meet two women (Virginia Madsen and Sandra Oh) who appear to be interested in them, but want a long-term commitment. Directed by Alexander Payne. [2:03]

SEX/NUDITY 8 - A fully nude man (his private parts are clearly visible) chases another man out of his house. A married couple has sex: we see them both nude, he is on top thrusting rhythmically (we see her bare breasts and buttocks, his bare chest and buttocks), and we hear them moaning and talking in crude terms about her having had sex with another man; another man is in the hallway watching them. A man walks into his hotel room where he sees a nude woman lying on a bed with her legs in the air and a man thrusting in front of her (we see the man's bare buttocks and the women's bare legs and abdomen and hear them both moaning). A man and a woman kiss, they move back and through a doorway, and we see them the next morning -- the man sleeps bare-chested and the woman is in a robe. We hear a woman moaning rhythmically from another room. A fully nude man stands in a doorway with his hands over his crotch. Women in bikinis and men in swimsuits dance on a TV show (we see cleavage, bare abdomens and legs, and bare-chested men). A man buys a pornographic magazine (we see a nude woman on the cover seated in such a way that her bare legs arms and shoulders are visible). A man makes references to sexual positions (anal intercourse, etc.) and a man makes a graphic sexual reference while walking through a restaurant, and a patron seated with a young boy is offended. A man asks another man for details about a sexual encounter. A man talks about having had sex with women and makes comments about what kind of lover each one is ("she's an animal," etc.). A man talks to another man about spending a week trying to find someone to have sex with him (frequently in crude sexual terms). A woman says to a man, "I need to be spanked." A man admires and makes suggestive remarks about several women in many scenes. A man talks about a type of woman being "grateful" to him for having sex with her. A man says that women admire him all the time, adding, "...and guys too." A man showers and we see his bare abdomen and legs through the shower curtain. A woman wears a low-cut top that reveals cleavage. A woman wears a low-cut, short top that reveals cleavage and bare abdomen. A man and a woman kiss in many scenes, a man kisses a woman on the cheek, and a woman kisses a man on the cheek. A man hugs a man, picks him up, and lies on top of him while on a bed (it does not appear to be sexual). A man sits on a toilet and we see his bare legs.

VIOLENCE/GORE 5 - A woman beats a man in the head and face repeatedly with her motorcycle helmet (we see the man with a bloody hand holding a cloth over his face, then we see him later at the hospital with a bloody bandage over his nose and we hear that he will need surgery to repair the damage). A man drives a car into a tree (no one is hurt), and then by jamming the accelerator sends it through a fence and into a ditch (no one is in the car). A man talks about running from a house after being discovered having sex with a woman by the woman's husband. A golf ball lands near two men on a golf green, one of the men hits his ball toward another group of golfers, and two from that group ride their golf cart toward the first two men; one of the men charges toward the cart yelling and swinging a golf club. A man argues with a man over a glass of wine, they struggle over the glass, eventually spilling it, and then the man drinks a bucket of discarded wine, pouring much of it down the front of his shirt. A man yells at another man when he tells him some disturbing news. A man runs down a hill and through a vineyard while drinking a bottle of wine and being chased by another man. A man sits on a toilet and we see his bare legs. A man drinks alcohol while driving and people are shown driving after having had a lot of alcohol to drink; also, a man solves a crossword puzzle while driving on a highway.

MESSAGE - Deceiving people you actually care about can only lead to misunderstanding. 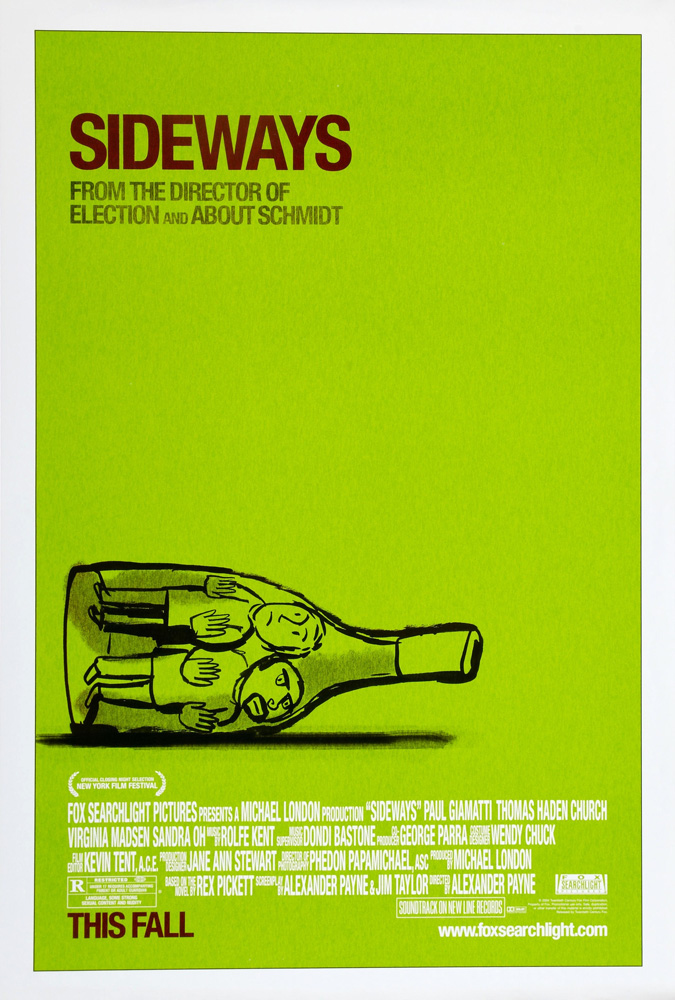