An irreverent, animated twist on fairy tales: An ogre named Shrek and his companion, a wisecracking donkey, rescue a Princess (who has different expectations regarding her rescue) from a fire-breathing dragon and have to fight an evil lord who hates fairy tale characters. With the voices of Mike Myers, Eddie Murphy, Cameron Diaz, John Lithgow and Vincent Cassel. [1:27]

SEX/NUDITY 3 - A man is seen in bed with bare shoulders and chest. There are a handful of kisses. There are a couple of attempted kisses, in two scenes characters pucker up in anticipation of being kissed, and a woman asks for a kiss. There are some mild sexual references during a scene describing three princesses. Two characters flirt in several scenes; one includes references to physical relationships. A dragon kisses an ogre's bottom (by mistake). A man kisses a woman's hand. A woman exposes some cleavage in a tight fitting gown. Some wooden puppets wear plumber's pants exposing painted bottom cleavage. A donkey urinates on a camp fire. A female dragon falls in love with a donkey. We see a shirtless green ogre.

VIOLENCE/GORE 4 - We see human and animal skeletons and a pair of boots with leg bones sticking out of them, and we see a huge dragon eyeball staring through a hole in a stone wall. An ogre and donkey attempt to cross a rickety rope bridge swinging over a moat of burning lava; a wooden board breaks and the donkey almost falls through. An ogre grabs onto a dragon's tail and is thrashed about and thrown into a castle tower crashing through the ceiling. A dragon blows fire several times while characters are running away; a donkey ends up with a singed tail once, and a rope bridge is burned while three characters are hanging from it -- one of them nearly falls into the lava-filled moat. A dragon breaks through a stained glass window and gobbles up a man. A huge collar attached to a chain is around a dragon's neck and when it runs out of chain (while chasing the three characters and blowing fire) the dragon is yanked back by the neck and unable to get loose. A dragon lands in a public square, scaring people who run off screaming. During one scene the ogre fights a group of knights with lots of wrestling moves, punches, kicks, clotheslining, hitting with chairs, body slams, head-butts, etc. A woman fights off a bunch of men using "Matrix"-like moves, and an ogre fights with a man, hitting him in the face and sending him flying hard into a tree. An ogre talks about ogre forms of torture, like squeezing the jelly from people's eyes, decapitating people and putting their heads on posts, cutting open spleens and drinking the juices, and shaving livers. An ogre is struck on the bottom with an arrow and a woman removes it, causing him some pain. Snow White lies in a glass coffin, presumably dead (other characters refer to her as being dead). We see a gingerbread cookie shaped like a man being tortured by being dunked into a glass of milk. His legs are missing, and he spits at a man. A bird puffs up (inflates) and eventually explodes while a princess sings; we then see her frying the eggs that were in its nest. A snake and a frog are blown up into balloons. An ogre knocks a woman into some shrubs (they are having a shoving match). A man wearing a huge costume head runs into a stone wall and falls back onto the ground. Two women fight over a tossed bouquet, a mouse hits two other mice with a cane, and a cookie beats a statue with a candy cane. A donkey walks into a dark and spooky building and bats fly out and toward him. There's quite a bit of squishy, slimy, as well as some scatological humor: an ogre pulls a wad of earwax from his ear, shapes it into a candle and lights it for his dinner table; an ogre brushes his teeth with some green slimy stuff (looks like caterpillar goo); an ogre eats a slug and has a jar of eyeballs on his dinner table -- he spears an eyeball with a toothpick and uses it to stir a martini; an ogre showers with mud, jumps into a pond and passes gas (we see bubbles emerging from the water, and we see his relieved look and dead fish float to the surface); we see an outhouse and hear the flush of a toilet as an ogre comes out adjusting himself; and a donkey talks about the effects of eating gas-causing food. An ogre yells at a crowd of people and spit flies onto their faces and strings of spit dangle from his teeth. We see two rats being cooked over a fire, watch an ogre eating the rats and see him slurp up the tails. Knights point armed crossbows at an ogre and a donkey, and a man threatens a woman with a knife. A donkey is catapulted from a tree. A couple of characters burp loudly.

MESSAGE - Love should be blind. Sometimes things are more than they appear. Friends should be able to forgive each other. 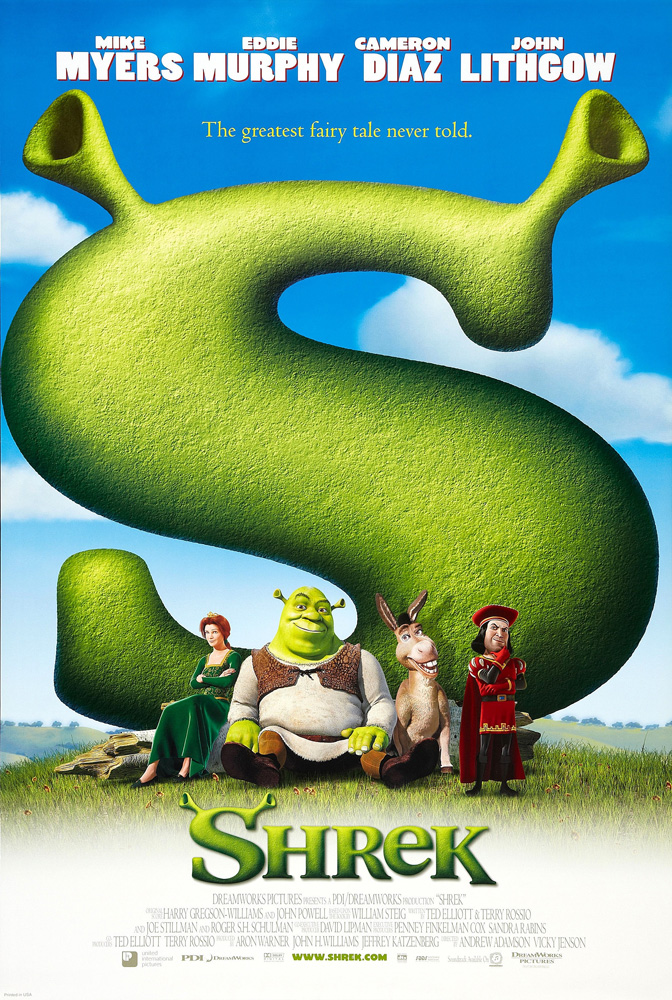