Why is “Serenity” rated R? The MPAA rating has been assigned for “language throughout, sexual content, and some bloody images.” The Kids-In-Mind.com evaluation includes several sex scenes that include some nudity, an implied murder, several scenes of arguments and physical and sexual abuse, the after effects of beatings with bloody wounds, and over 100 F-words. Read our parents’ guide below for details on sexual content, violence & strong language.”

A fishing boat excursion captain (Matthew McConaughey) is contacted by his frantic ex-wife (Anne Hathaway), who asks him to murder her rich but abusive second husband before he can kill her and the captain’s young son. The captain must decide whether he should acquiesce to his ex-wife’s plea — or whether he may be losing his mind. Also with Diane Lane, Jason Clark, Djimon Hounsou and Jeremy Strong. Directed by Steven Knight. A few lines of dialogue are spoken in an unidentified language with English subtitles. [Running Time: 1:46]

– We hear the sexual moans of a woman off-screen and we see her bare feet and lower legs with a clothed man lying between them; the man kisses the woman in close-up while lying on top of her and she is clothed in a knee-length dress, and the man is then shown shirtless while sitting on the edge of the bed and then standing at a dresser (we see his bare back) as the woman kisses him and hands him some currency, joking that he may be a hooker; the woman then bends her knees and lowers to below the frame and he smiles, suggesting oral sex.
► A man moves as if he is dropping his trousers below the frame, turns a woman around roughly to face a table and begins to thrust; the woman is wearing a knee-length slip with thin straps that reveal cleavage and the man sees bloody gashes in the woman’s back (please see the Violence/Gore category for more details), turns her around, removes his shirt and kisses her, pushes her onto a bench-like seat at a table and thrusts (we see his bare buttocks for a few seconds as he thrusts and she moans and we see her bare feet and lower legs). We see a man’s bare buttocks as he thrusts with a clothed woman (we see her bare feet and lower legs) and she moans loudly; the man stands up wearing briefs (we see his bare back, chest and abdomen), and walks into another room where he removes the briefs and we see his buttocks.
► A man walks outside and we see him nude in a long shot as he jumps off a cliff to swim in the ocean and we glimpse his genitals; he meets a young teen boy and we see the boy’s arms and lower legs for a few seconds as the scene ends. A man wears underwear like biking shorts and we see his bare chest, abdomen and back. A shirtless man in bed has difficulty getting up and his skin seems stuck to the sheets (we cannot see why).
► As we see a headshot of a woman looking into the camera, a man behind her pulls her bathrobe off (we see bare shoulders), he examines her buttocks (please see the Violence/Gore category for more details; we cannot see them) and pulls off his belt, ending the scene with sex implied. A woman stands close to a man, breathes on his neck and kisses him and he pushes her away. A husband slaps his wife on her clothed buttocks in close-up.
► A man asks two other men what they do for “girls” and they say “nothing”; the man says he hears that “there are girls that take it in the [anatomical term deleted] for $10 a pop” and he is “going to grab some ten-dollar [anatomical term deleted].” A man tells another man that the second man is seen by many people every morning, running naked outside.

- A woman awakens to find the other half of her bed covered in blood and we see a bloody shoe and bloody eyeglasses on the floor; a man in the bathroom is slumped against a wall as we see a bloody handprint on the side of a tub that is filled with blood-tinged water and the man gasps and rises to reveal his beaten, bloody face, a swollen eye, and blood covering one hand and forearm; the woman washes his face and places bandages on his hand (some blood seeps through), she places his damaged hand around her throat, he grimaces and yelps in pain, and she kisses him briefly to end the scene.
► A man punches two men unconscious. A man pursues another man and tells him, "Don't kill that man," and the second man pushes the first man to a wall and holds a knife to his throat, but releases him. A flashback shows a boy hiding under a bedspread in fear. In a flashback, we see a boy grab a long, sheathed knife, leave his room, and return; we hear that the boy was arrested for second degree murder but was released because of mental illness and it was a case of self-defense. A husband frightens his wife by entering their hotel room suddenly and she screeches, he pulls her bathrobe off and examines her buttocks (we cannot see them) asking what caused a scratch, he pulls off his belt and the scene ends, implying a beating and sex (please see the Sex/Nudity category for more details).
► A man and a woman take a man to a boat (the man has been beaten and his face is bloody and one eye swollen), they set him onto a fishing chair and give him a lot of alcohol (please see the Substance Use category for more details); the first man throws buckets of bloody chum pieces into the water, the man in the chair grabs a long rod and is pulled into the water and sinks to the bottom, presumably dying (a shark is not visible). Two men on a fishing boat struggle with a knife and argue about who will reel in a fish, which gets away. A man attempts to catch a giant tuna several times, but always loses it; he becomes obsessed with catching the fish and names the fish "Justice."
► On a wall in a dwelling made from a freight container, we see what looks like a row of scalps with long hair. A man cuts up a bloody fish, sections the meat into pieces, and places the pieces on a series of fish hooks (blood covers a table and the man washes it off, throwing a bucket of bloody water into the ocean). In a building at a dock several men work on large dead tuna, cutting fins off and cutting up meat that leaves some blood on work tables. A woman grabs a sheathed knife hanging on a man's belt and they argue briefly, until she releases the knife.
► Many scenes include the off-screen shouts of a husband cursing and slapping his screaming, crying wife as we see a 13-year-old boy listening from his bedroom and looking dazed. A woman tells a man that her current husband is abusive and may kill her young son and she asks the first man to take the husband fishing and throw him to the sharks; the man shouts, curses, and tells her to leave. A flashback shows a man bursting into his stepson's room, shouting and in real time, he says he threw the boy off a chair to get a reaction. A flashback shows a boy telling a man that he would find a way to kill him. A man says a 13-year-old boy sits in his dark room as his stepfather beats his mother. A woman tells a man that another man beat his wife in a hotel room for an hour and a half and the woman did not make a sound. A woman tells a man, "Don't kill the man, catch the fish." A man says he will kill another man. A man thinking about murder shouts at the sky several times. We hear that a soldier died in the Iraq War and we see a purple heart in a drawer. A man says that he keeps seeing himself lying dead in the sand. We hear that a man's wife died. A man argues with a woman and later he argues with another woman. Two men argue loudly twice. A man hears muffled voices and a woman tells him he is mentally connected with another person.
► Two scenes feature a night sky with lightning and thunder before heavy rain soaks a man.

- Physical and emotional abuse of children can cause them to become violent and develop mental illness. 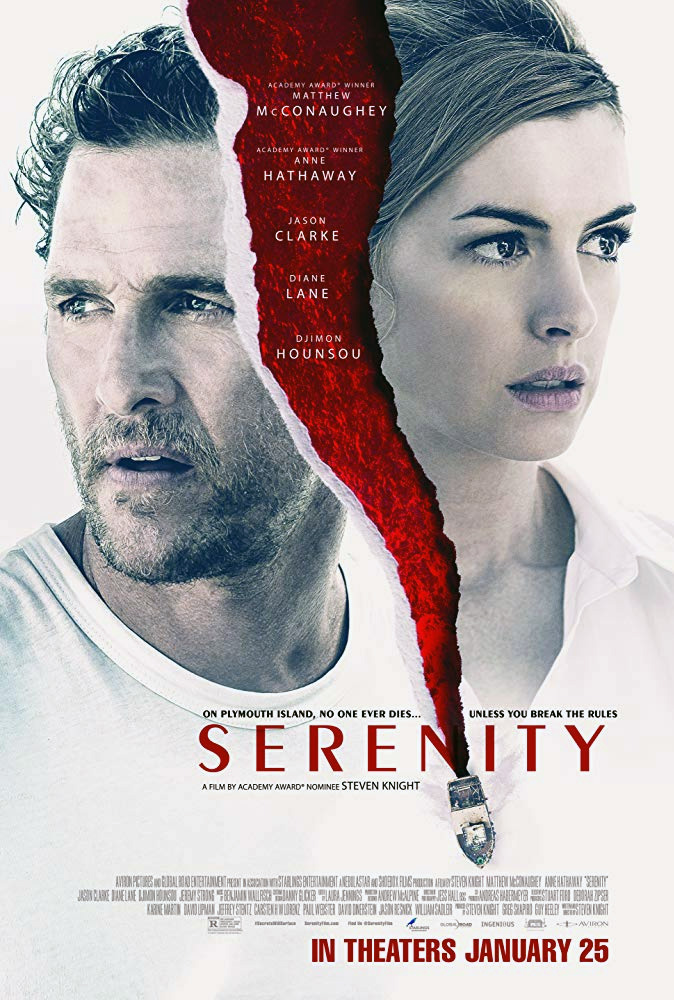