The bloodletting that started in "Saw" continues in this second installment about a serial killer called "Jigsaw" who likes to create elaborate puzzles that force his victims into self-mutilation and murder in a vain attempt to escape a grisly death. This time the puzzle revolves around eight strangers, locked in a room, who have no idea of their connection to each other. With Tobin Bell, Shawnee Smith, Donnie Wahlberg, Erik Knudsen and Franky G. Directed by Darren Lynn Bausman. [1:31]

SEX/NUDITY 1 - Two women wear low-cut tops that reveal cleavage throughout the movie. A man is bare-chested and wearing boxer shorts in one scene.
► A man accuses a woman of being promiscuous by using crude terms. It is suggested that a man and a woman have had a sexual relationship and that it was while the man was married to another woman.

VIOLENCE/GORE 9 - In an extended scene a man crawls into a furnace to retrieve something, when he pulls on the item, the furnace door closes, the fire jets are ignited beneath the man, and he screams and squirms while people outside try to open the furnace door; one man breaks the glass on a furnace porthole, the man inside sticks his head out but cannot fit through and screams as flames burn his legs and torso and then falls limp.
► A mask on a clamp, with nails inside the face, slams shut on a man's head; the man falls over dead and blood pours onto the floor.
► A man's throat is slashed, he gurgles, falls to the floor, blood pours from the wound, he gasps and dies.
► A man slices a large piece of skin off the back of his own neck and he screams loudly (we see the skin being pulled, we hear tearing and there is a lot of blood).
► A man peering through a peep hole in a door is shot through the eye by a gun: we see his very bloody eye as he falls to the floor and see a very bloody exit wound on the back of his head, as well as a blood spattered woman who was standing behind him.
► A woman puts her hand through a tube in a glass case; when she tries to pull it out, sharp blades close around it cutting into her skin, and she puts her other hand into another tube to try to free her first hand, but both are trapped and blood runs down her arms.
► Two men fight (one man has a knife): they punch each other, one is pushed and hits his head on a large metal safe, one is kicked in the head, and one is hit in the back of the head with a bat that has nails sticking out (he falls over and blood pools around his head). A woman pulls a bat with nails sticking out, out of the back of a man's head and we hear a loud squish and his head pounds on the floor when it is freed.
► A man pulls himself out of a burning car after having had an accident and a metal rod is sticking out of his side; he pulls it out while we hear squishing, and he bleeds profusely. A woman slices her wrist with a razor (we see the incision and she bleeds).
► A man holds a knife to a man, who grabs his hand and forces him to cut along his throat (the incision is not very deep but it bleeds), and a woman breaks a glass bottle and threatens the man who's cutting his own throat.
► A man punches another man repeatedly, kicks him, stomps on him, and he breaks one of his fingers (we see blood on the victim's face).
► Police in a crime scene examine a dead body: the man is lying on his side, blood is pooled around his head and a piece of skin is carved out of his shoulder. A woman and a boy find decomposed bodies in a room along with a severed foot.
► As the movie progresses we see the people who are trapped in a building deteriorate from exposure to a nerve gas: they become weak, develop patches on their skin, and they cough up blood). A woman collapses, convulses, spits blood and dies. A woman coughs up blood and spits it on the floor.
► Three officers walk through a dark steel mill, they open a gate, walk up steps, and trip a booby trap: one officer is stabbed through the leg with a piece of metal (we hear a squish and a crunch), he falls back screaming and knocks the other two back, who crash into the gate -- which has become electrified -- and are electrocuted.
► A woman is thrown into a pit that is filled with syringes: she moves and we see several sticking out of her skin, she screams and struggles to find something.
► A SWAT team arms itself and prepares for a raid: they enter a dark and abandoned steel mill where they find a man with an IV and various torture and surgical devices (some with human skulls and skeletons inside).
► A man holds a scalpel to his own eye, trying to make an incision in order to remove something that's supposed to be behind the eyeball; he screams, but is unable to cut.
► We hear a man panting and gasping and see from his perspective as he looks around a dark and dingy room; he has a hinged mask strapped around his neck (it has nails protruding from the part that would fit over his face) and he pulls a mirror toward his face and sees his reflection (he has a very bloody eye).
► A man watches a video of what looks like him lying on an operating table and we hear that another man has implanted a key behind his eye.
► A man is injected with something that knocks him out and when he wakes up he's shackled to a wall. A woman remembers a man holding a drug-laced handkerchief over her nose and knocking her out. We see a video of several people being held in a room: they pace and appear nervous and agitated, and we hear a man talking about a gas that is seeping into the room that will cause them to bleed from every orifice until they die.
► A man with a knife chases a boy and a woman. A man threatens to rip a man's head off. A man and a woman argue bitterly. A man uses a bat with nails in it to break down a wooden door.
► An unconscious woman wakes up, screams and vomits.

MESSAGE - Those who do not value life do not deserve to live. 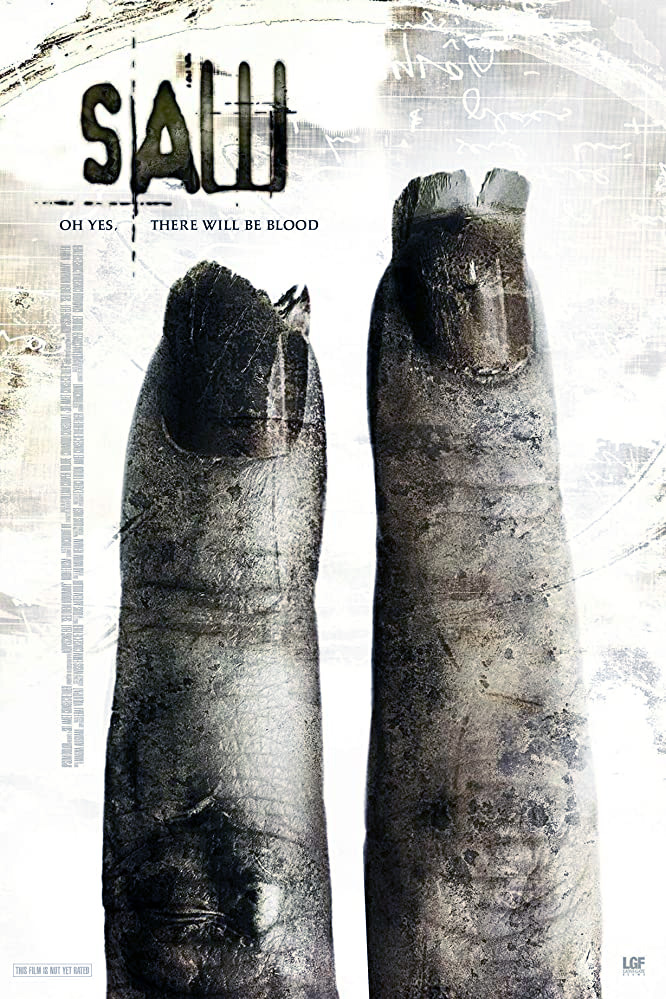