Why is “Safety” rated PG? The MPAA rating has been assigned for “thematic content involving drug addiction, and some language.” The Kids-In-Mind.com evaluation includes a couple of flirting scenes, a couple of dancing scenes, and shirtless young men in locker rooms; several football practice and game scenes with players crashing into each other and being pushed to their limits of pain, and several arguments, discussions of custody, foster care, and a drug treatment program, and some strong language. Read our parents’ guide below for details on sexual content, violence & strong language. Inspired by the true story of Ray-Ray McElrathbey (Jay Reeves), a promising first year Clemson University football player: while trying to make it on the team, the pressure of maintaining his grades was compounded when he found himself caring for his younger brother (Thaddeus J. Mixson) after their mother had to move into a long-term rehab program. Also with Corinne Foxx, James Badge Dale, Matthew Glave, Brett Rice, Hunter Sansone, Amanda Warren and Brad Carter. Directed by Reginald Hudlin. [Running Time: 2:02]

– Football players are shown in practice sessions in many scenes, running up and down bleacher steps, running sprints while being timed, slamming into each other and shoving each other to the ground. A young man runs up behind another young man, who draws his fist up when he is startled.
► A pre-teen boy disappears and leaves his brother a note; many people search for him and he is found (he’s safe). A woman signs over custody of her pre-teen son to her older son. A young man goes to an apartment where he finds his younger brother, and a few men surround him threateningly. A pre-teen boy is told that he will be sent to foster care while his mother is in an in-patient treatment program. Young men trash-talk each other in a few scenes during football practice. A young man in football practice says, “Blood is on your hands coach.” A pre-teen boy yells at his older brother, saying, “You left me.” A young man says, “The system’s against me.” A boy calls his older brother to ask him to sign a disciplinary report from his school and the older brother becomes aware that his mother is not home with the younger boy and that he is staying with a man that the older brother refers to as “not safe.” A man tells a young man, “Your mom went to Fulton [prison].” A young man throws away a box of cereal and a pre-teen boy yells at him, “How dare you disrespect Frosted Flakes.” A pre-teen boy tells his older brother that their mother was sent to jail for “possession.” A pre-teen boy tells his older brother, “You suck at this.” A pre-teen boy is reprimanded by his teacher and principal for not changing into his gym uniform and the boy says that he fears that someone will steal his lunch money; the men tell his older brother that the boy should drop back a grade because he is so far behind. Coaches yell at a young man in several scenes for not being prepared and not doing well in practice; they threaten that he will lose his scholarship if he doesn’t change. A man quizzes a young man about accepting gifts and rides from people because they are afraid of breaking NCAA rules. A pre-teen boy accuses his older brother that he is, “Scared of commitment.” A young man yells at his coach and tells him, “Stop fronting like you care,” and the man tells him, “Do not disrespect us.” A young man speaks in front of an NCAA board requesting that he be allowed to receive certain kinds of assistance to help care for his pre-teen brother.
► A young man is shown waking his pre-teen brother, taking him on a bus to get to school, riding back to football practice and his own classes and studying. A pre-teen boy walks in the rain to get to a bus stop and turns down a ride when a woman he knows drives by. A young man brings his younger brother to stay with him in his college dorm and has to keep him from being discovered by the RA and his football coaches. A boy is carried in a duffel bag to the bathroom to keep him from being discovered in a college dorm. A pre-teen boy and a young man sneak around a locker room and the boy hides in a laundry bin covered by used towels when other young men come into the room; the boy sneezes and is discovered. A young man yells and flinches (thinking he feels a spider on him) while working on plumbing under a sink and his younger brother yells and runs across the room.
► Two young men wake up in a start and realize they are late for practice, running around a room and arriving at practice where they are reprimanded by coaches. A young man yells in a class and gets up from his chair limping from a leg cramp. Young men are shown wearing large bags of ice on their very sore legs. Young men are shown sitting in whirlpool baths with buckets of ice dumped on them after practice. A young man covers a pre-teen boy with laundry to hide him from the RA at the door.
► A movie scene on TV shows a man yelling in the rain while standing in a muddy field; he pounds into the ground and pulls another man up by the feet covered with mud.

– We hear that a woman was arrested for possession and that she has been sent to a 30-day in-patient treatment program. People are shown drinking punch at a college party (not clear if is alcoholic) and a young man confronts another young man and tells him to get him a drink.

– It’s OK to ask for help when you need it. Family can be found anywhere. 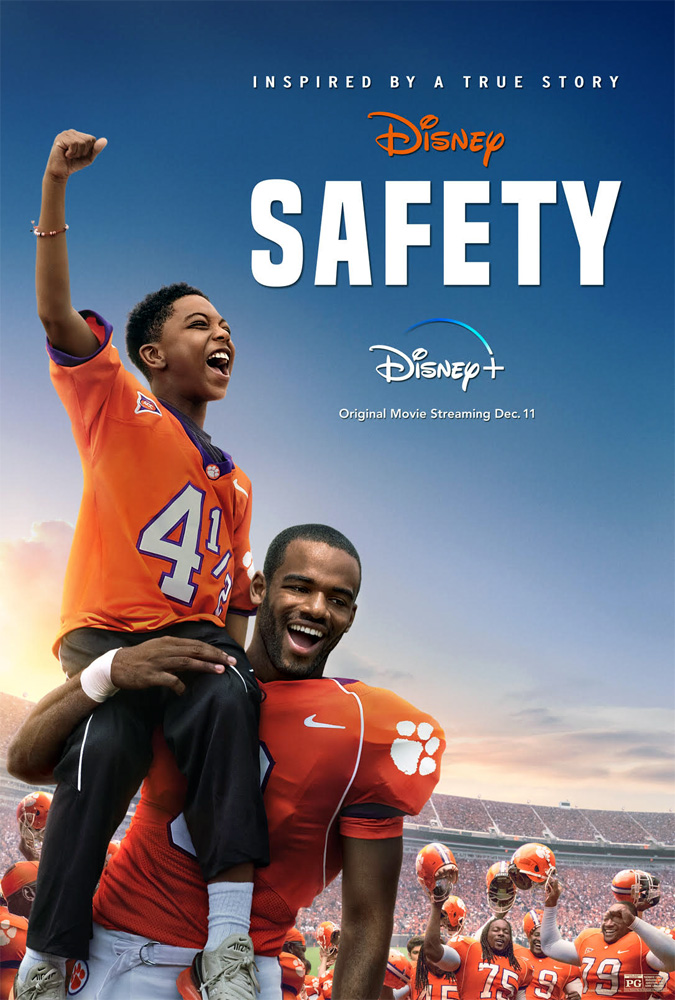