A fictionalized account of the life of Tim "Ripper" Owens, the office supply salesman who in 1996 replaced Rob Halford in the heavy metal band Judas Priest. The film chronicles the ups and downs of fame and fortune. Mark Wahlberg stars as the main character and real rockers such as guitarists Zakk Wylde and Brian Vander Ark, bassist Jeff Pilson and drummer Jason Bonham, are cast as rockers. Also with Jennifer Aniston, Dominic West, Timothy Spall and Timothy Olyphant. [1:44]

SEX/NUDITY 8 - Men and women dance at a night club, with couples kissing sensually, some with exposed tongues (men and women, women and women), dancing close in groups of three (a woman sandwiched between a man and woman and a man sandwiched between two women), and touching each other. A couple kisses sensually several times. A man takes a vial of liquid (presumably an alcoholic beverage) out of a woman's cleavage using his mouth. We see many men and women in various states of undress in a room the morning after a concert (the suggestion is that there has been group sex); many of the women are topless and we see men with bare buttocks (one stands up and pulls up his underwear). A woman exposes her bare breasts as a car drives by, rubbing them on the window (we see this from the inside of the car). We see a woman in bed with a man and woman -- one woman is bare to the waist; the other climbs out wrapping herself in a sheet and we see her bare back and shoulders. A bare-chested man and a woman in a robe sit in a candlelit room; she rubs an ice cube on his nipple (we see several close-ups of his nipple) and they kiss passionately a few times. A woman climbs on a man's lap and they kiss passionately. A woman shows her panty strap to a man in order to get a backstage pass, a woman wears a top that shows the outline of her nipples, a man stuffs a cup in his pants, and two women lie in bikini bottoms and expose their bare breasts when they role over. There is an exterior shot of an adult theater with a big XXX on the marquee; two characters walk through the theater and we see a quick glimpse of a man in leather pants dancing suggestively in front of a woman. A man holds a hose between his legs and sprays an audience with water. During the concert scenes the musicians frequently dance suggestively flirting with the crowd (thrusting their hips toward the audience) and making sexual gestures. There are many scenes depicting women (and discussions about women) wanting to have sex with rock stars (in a couple of scenes women line up waiting to be chosen to have sex). There are many sexual references: a reference to a man's endowment, a discussion about a rock star being gay, and a discussion about a song having been about a man's male lover. The wives of some rock stars talk about knowing what goes on on the tour bus, a man questions another man's sexuality, a woman asks another woman if her breasts are hers (she seems to be making a pass at her), a woman remarks about a man's pants and looks at his crotch and a man talks about having sex all the time. A person we think is a woman is shown (from the back) urinating standing up and we realize she's a man; in one scene she remarks about a man having been really good the night before. A woman talks about another woman's body and that she should dance at a strip club, a woman comments about needing to "have" a man sexually because she needs to get back to work. There are many scenes with bare-chested men in their stage costumes. Women wear a variety of tight-fitting and figure-revealing clothing exposing a lot of cleavage, midriff and thigh. A woman cuts off a man's underwear with scissors and we see part of his bare buttocks.

VIOLENCE/GORE 3 - A woman pierces a man's nipple and we see several close-ups of the nipple: we see a needle beginning to poke through the nipple and a ring being placed in it as the man winces. A man falls off some stage steps and lands hard; he has blood trickling down his forehead. A fist fight breaks out between the members of two rock bands, with punches and rolling around on the ground. A man jumps on another man, they land on the ground and one is put in a choke hold. A man breaks an amplifier by slamming it with a microphone stand and sparks fly, a man throws furniture around a room and a TV out a window, and a man drives a motorcycle through a hotel room door. A man fires a gun at a highway sign and he talks about having killed something every day. A man loads a gun and cocks it as a man walks by and it is briefly pointed at his face. A group of men argue in a couple of scenes. We see a man hooked up to a dialysis machine.

LANGUAGE 7 - 14 F-words (a few are mouthed and a couple are in British slang) and many obscene hand gestures (in one instance simultaneously by a crowd of people), 21 scatological terms (two of which are bleeped), 6 references to urination, 23 anatomical terms, 16 sexual references, 14 mild obscenities, 2 religious profanities, 5 religious exclamations and some name-calling and insults.

SUBSTANCE USE - There are several scenes depicting drug and alcohol use and abuse.

MESSAGE - Actually living your dream doesn't always turn out the way you expected it to. 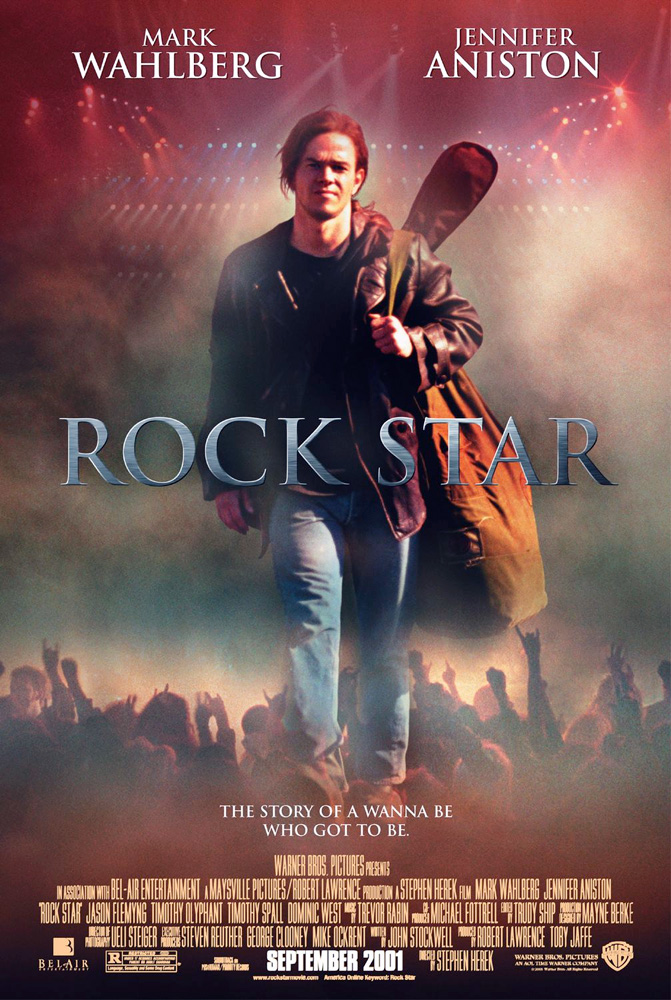