After a college student accidentally mails a videotape of his unfaithful behavior to his long-distance girlfriend, he and his friends drive across the country to intercept the package. With Breckin Meyer, Seann W. Scott, DJ Qualls, Paulo Costanza, Amy Smart, Rachel Blanchard, Tom Green, Fred Ward and Andy Dick. [1:33]

SEX/NUDITY 9 - Lots of sexual innuendo and discussion (including references to orgasm, masturbation, anal rape, child prostitution, bestiality) and several kisses, mostly passionate. In what looks like a home movie, we see a boy and girl kiss briefly, and in another scene we see a boy try to touch a girl's clothed chest while kissing her. A woman takes off her shirt (her bra is visible) and a man starts kissing her cleavage. A woman wearing panties and a bra lies on top of a boy in underpants and kisses him passionately; she pulls off his underpants (we don't see any nudity) and it's implied she puts a prophylactic on him, then we see them thrusting under covers. A woman takes off her skirt and shirt (her panties and bare breasts are visible), then lies on top of a man and kisses him passionately (we learn that they had intercourse a few times); the scene is videotaped, and we see parts of it a few times throughout the movie. A man sits on a bed with two women: in one scene he kisses one of the women and then asks the women to kiss each other (they don't), and in another scene they're all topless with the women caressing the man's chest and the man touching the women's bare breasts (it's comical rather than sensual). During a scene that takes place in a sperm donation center we see a man stimulating himself (his crotch is covered by a binder presumably filled with centerfold magazines); also, a nurse puts on a glove, stands behind a man, and then supposedly performs a "prostate stimulation" procedure on him (he yells and jumps, then we see her take away a cup afterwards). In a later scene another woman wearing a rubber glove stands behind the same man and appears to be ready to perform the same procedure. A man in boxers has a very enlarged member (he's watching a dance show featuring girls in swimsuits). A woman hands another a vibrator, a man starts licking a woman's toes, a man grabs his clothed crotch, a man smells a pair of panties, and a man leans down and talks to another man's crotch. We briefly see two dogs copulating. In a women's locker room scene we see several topless women, brief frontal nudity twice and a woman's bare backside as she takes off her thong underwear. We see a close-up of a man holding and shaking his bare buttocks (his pants are pulled down slightly), some girls wearing cleavage- and/or midriff-revealing tops, a sleeping man with his hand down the front of his underpants, and a poster of a scantily clad woman.

VIOLENCE/GORE 3 - Mostly played for laughs. A snake attacks and swallows a man's hand; he swings it around a room, breaking several things, and finally flings it off of his hand and onto another man (it's implied the snake bites the man's neck; we see the man lying on the floor with the snake wrapped around his neck). In one scene a man is punched (he gets a slightly bloody nose), a man flips another onto a table (which breaks) and pins him to the floor, two men jump on another (one elbows him in the back), a man threatens several others with a gun, and a man sprays people with a fire extinguisher. A man grabs another's arm and pushes his face into a counter. A woman smashes a car with a baseball bat and hits a man's arm with the bat, then we hear punching noises and see her shaking him by his hair. A car speeds and then jumps across a broken bridge (it falls apart once it hits the other side, then explodes after everyone gets out). We see a man lying on the ground who supposedly drank poison. We hear a woman start to vomit. A man puts a mouse in his mouth then pulls it out. A man licks another's pieces of toast, puts them down the front and back of his pants, passes gas, then puts the toast back on the plate; we later see the man eating it.

MESSAGE - It's not the destination but the journey that's most important (and, often, most interesting). The college experience includes a lot of partying and a little studying. 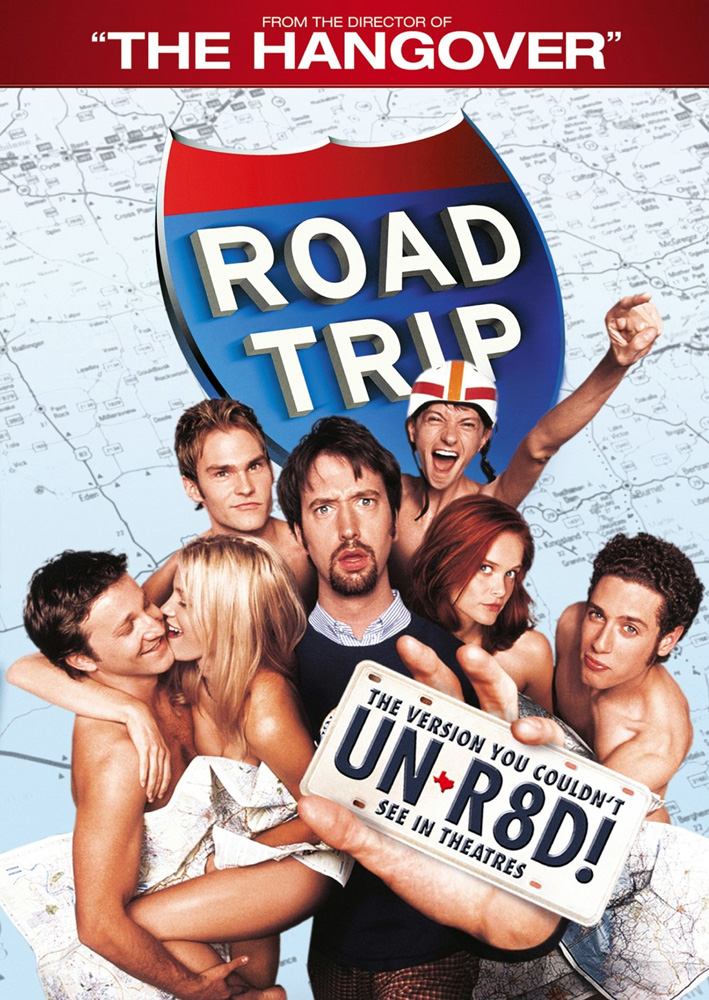