Why is “Rescued by Ruby” rated TV-G? The TV Parental Guidelines Monitoring Board rating indicates that “this program is suitable for all ages.” The Kids-In-Mind.com evaluation includes a few kissing scenes, a woman reading a pregnancy test, discussions of dog shelters and euthanasia of unwanted animals, a dead body retrieved from concrete, a badly injured teen boy, and some moderate language. Read our parents’ guide below for details on sexual content, violence & strong language. Based on a true story: a dyslexic, hyperactive state trooper (Grant Gustin) wants to join the K-9 team, but must find the right dog for the job as his partner. He chooses an incorrigible shelter dog scheduled for euthanasia and must train her to be a qualified search-and-rescue professional. Also with Scott Wolf, Camille Sullivan, Kaylah Zander, Eileen Pedde, Tom McBeath and Sharon Taylor. Directed by Katt Shea. [Running Time: 1:30]

– A shelter dog is returned by seven families as too active and unruly and the shelter owner says he will euthanize the dog if no one adopts him on the day of this last return; we see several scenes of past placements and the trooper’s home, where the dog runs through homes, tears up important papers, jumps on furniture, digs holes in the lawn, steals sandwiches, and will not obey commands. We see a home where two small dogs bark loudly, a pet lizard crawls away, a snake starts to slither out of its tank, two toddlers run and shout, and a close-up of a tarantula is shown as a man shouts into a phone to be heard above the noise.
► At a dog shelter, a hose gets loose and sprays all over a room and a woman. In two scenes, a dog whimpers when put into a crate. A trooper searches for his dog in his cruiser and on foot in the rain, shouting the dog’s name, but the dog hears him and ignores him; the dog later stands in the rain in front of the cruiser and gets in when the trooper opens the door.
► A trooper is called at night to find a missing teen boy in 1,000 acres of forest that includes steep rock cliffs and other dangers; the trooper and his dog run through the terrain and find the boy unconscious at the bottom of a cliff where the trooper does CPR and the boy revives groaning, and is said to have a concussion, a broken leg, and suffering from hypothermia (we see a wide red gash across his forehead and blood on his nose and lips); we see the boy on a stretcher later and hear that he will recover. A trooper’s walkie-talkie won’t work and his dog barks continually until troopers and medics find them and we see a wounded teen boy on a stretcher and hear that he will recover. A trooper gets a call in the middle of the night about a missing murder victim and he takes his dog to a house where the dog indicates the body is under a deck; nobody is seen and the trooper berates the dog and it runs away. A body is shown in a body bag after being buried in concrete under a deck.
► A state trooper later stops to speak to a toddler on a Big Wheel, asking him how many juice boxes he’s had that day and the boy screams. A K-9 trainer says he hid a human tooth as a search dog runs into woods returning with a hornet’s nest on a stick; other dogs run and humans flap their arms and shout at flying hornets, with one man showing red spots on his neck from hornet stings. A state trooper chases the same speeder twice with lights and sirens going and tickets the driver. A man taps his feet continually and wrings his hands; we hear he ran two miles with a broken kneecap in order to pass a state trooper test, and is told that he is not calm enough at work. During the end credits, we read that the dog portraying the rescue dog in the film was also rescued from euthanasia at the last minute, by trainers working on the film.
► A dog sits on a rug behind a small pile of feces and a woman groans. We hear urination off-screen and see a puddle beside the dog on a wood floor. Outside, a clothed man facing away from the camera and shown from the knees down, urinates as we see and hear the stream; the dog sits and the man says the dog finally urinated outside. In a large washroom, we see feet under stall doors, one pair clad in shoes and one pair of bare feet.

Rescued by Ruby SUBSTANCE USE

– Search dogs find two large bricks of drugs in a river or pond, a man says search-and-rescue is often busy with finding drugs and arresting pushers, and a man says a dog needs medication for hyperactivity. A man at a BBQ yells “free beer” but we see no beverages at all; two men in a park drink root beer from bottles that look like beer bottles.

– Individual people and animals learn differently and they all need patience. 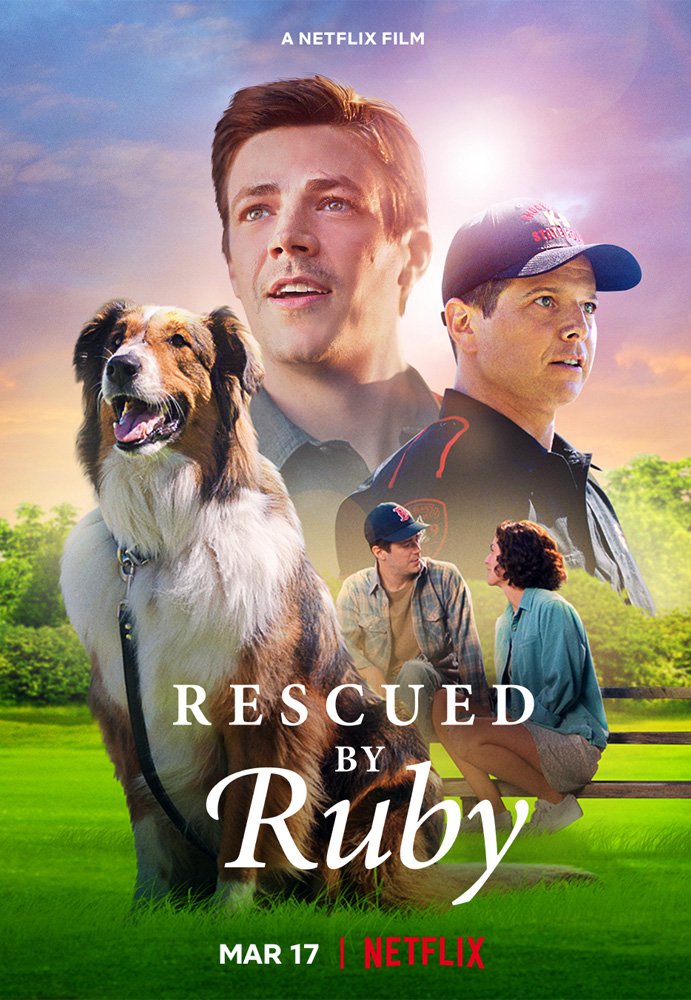