School's out for summer and T.J. Detweiler is bored, until he discovers that former principal Dr. Benedict plans to use a laser beam to do away with summer and keep winter all year round -- and thus doing away with summer recess too. With the voices of Allyce Beasley, James Woods, Dabney Coleman, Rickey D'Shon Collins, Jason Davis, Ashley Edner, Ashley Johnson, Andrew Lawrence, Courtland Mead, Katey Sagal, Pamela Segall, April Winchell and Robert Goulet. [1:23]

SEX/NUDITY 1 - There's some talk of kissing and references to a teenage crush read from diary entries. A man is shown in his underwear, tied up and gagged. He spends most of the rest of the movie dressed like this.

VIOLENCE/GORE 3 - There's a scene with ominous music playing in the background where some trucks crash through a fenced military installation, a door is blasted down and two men are shot with some kind of ray guns and fall to the ground unconscious. A man is zapped by a green glow and disappears leaving his smoldering shoes behind (we see him later being held hostage). A woman punches a man in the face several times and then in the stomach, and a man punches a man in the face. There's a huge explosion in the school with the children still inside leaving lots of rubble and smoke, but nobody is harmed. A giant laser machine fires a green tractor beam at the moon, and a boy faints after seeing the beam. Men chase a group of children several times. A girl head-butts a man in the stomach, some marbles are thrown on the floor causing men to fall, a door closes nearly catching a boy who is dragged back by a ninja security force. The kids plan an attack using soda bombs, silly string, and ketchup and mustard squirt bottles. There's a big fight with lots of goo and shoving and falling. A group of guards ends up falling in a ditch. Men are hit in the face by water balloons, men are tripped by a rope and wrapped in a net, men are bombarded by balls, the kindergartners are loosed on the ninjas, and a man has a huge barrel of chowder dumped on his head (barrel included) and he falls down some stairs. A group of children take many risks trying to thwart a bad guy's mission: they break into a locked school, they climb through air vents (and fall out of one landing hard on the floor), they scale the side of a building with ropes, and they are almost caught by the bad guys several times. A man and a boy are locked in a cage. A woman scales the side of a building and falls, landing on a boy waiting on the ground. A man wears a mask to disguise himself as someone else and pulls it off to expose that he's one of the bad guys. A large man yells at and chases a boy. A woman gets stuck trying to climb through a window. A boy is inadvertently buried under a mound of dirt by two boys filling in holes in a school yard. Children stampede through the halls of a school on the last day of class. Kindergartners are shown covered with paste and there are references to them having eaten some. A boy yells in frustration when nobody will believe him. Two siblings talk very abusively to each other, a coach talks abusively to his team members, a boy is yelled at and called names by a "military camp" captain (an older boy), bullies yell at younger kids, and a bad guy yells and talks abusively to his cohorts and to some children who are trying to stop him. Protestors yell and wave their fists at a man. A boy burps loudly and it echoes.

LANGUAGE 1 - There are several mild anatomical references used as insults along with other non-profane insults and threats.

MESSAGE - You should always listen to a kid who says he has seen a green glow coming from the school cafeteria when it's supposed to be closed for the summer. We must never forget what it was like to be a kid. 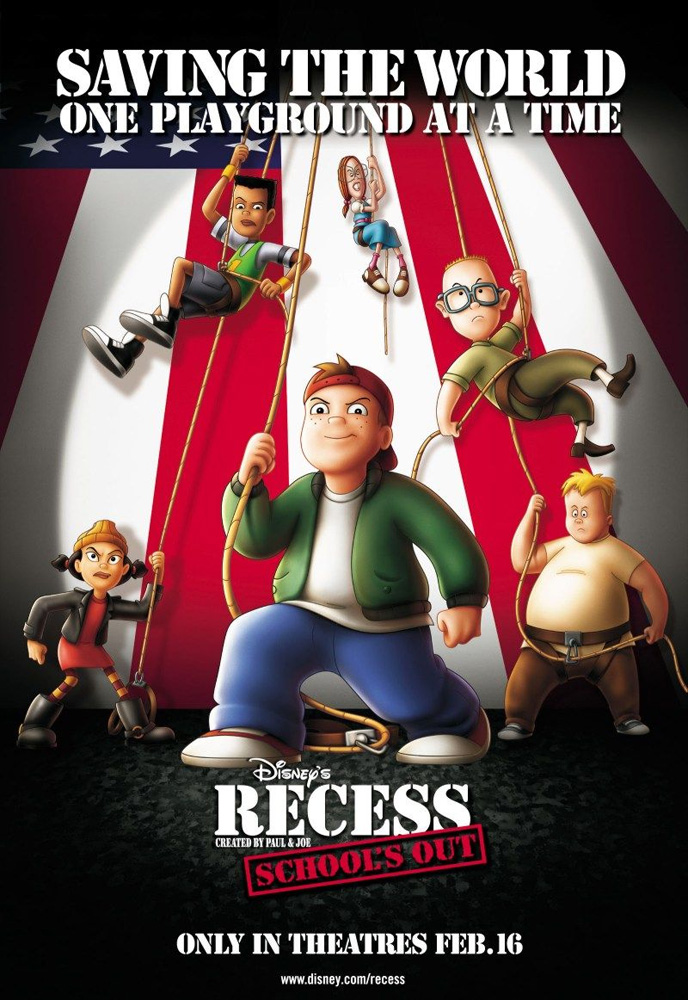