The story of a boy zebra that ends up being raised by a Kentucky horse farmer who used to train race horses. Under the impression that it is a thoroughbred, the zebra decides it can win the prestigious Kentucky Crown, if it will only train hard enough. The thoroughbreds it is pitted against try to convince the zebra that it doesn't have a chance. With Bruce Greenwood, Hayden Panettiere, Caspar Poyck, Gary Bullock, Wendie Malick and M. Emmet Walsh, and with the voices of Frankie Muniz, Mandy Moore, Michael Clarke Duncan, Jeff Foxworthy, Joshua Jackson, Snoop Dogg, David Spade, Whoopi Goldberg, Dustin Hoffman, Fred Dalton Thompson and Steve Harvey. Directed by Frederik Du Chau. [1:24]

SEX/NUDITY 2 - Two male horses talk about a female horse with suggestive terms ("nice flanks") and ask her to join them for a drink (at the watering hole). A horse and a zebra nuzzle and express their feelings for each other. A woman wears a very short skirt and thigh-high boots that reveal her bare upper thigh. Women wear low-cut tops and dresses that reveal cleavage. A young woman's top hangs open to reveal cleavage and a tank top underneath. A young woman's top hikes up in the back revealing her bare back to the hips.

VIOLENCE/GORE 3 - Many horses approach a zebra and say that he must be "taught a lesson," they crowd around him, they rear up, and we see the zebra lying still on the ground much later (it is OK, just unconscious). A horse chases another horse and is being threatening. A horse rears and throws its rider. Horses crowd a zebra against the rail during a race, and a rider whips the zebra (it whinnies). A zebra races against a mail truck, and it runs into a tree and falls to the ground. A zebra loses its footing while running on a turn, and it falls and skids into mud and shrubbery. Animals talk about a woman and her horse having died after a riding accident. A lion in a cage snarls and snaps at a woman as she passes, and she screams. A horse yells at its son in several scenes. A zebra is frightened by the noise made by horses in the stalls of a racing gate, it stops mid-race and the rider falls onto the track (she is not injured). A baby zebra is left in a basket in the middle of a road during a heavy downpour, and a truck nearly hits it. A pelican pulls a dirt bike apart, the pelican is sprayed with oil, and the bike blows up knocking the charred bird through the air (the pelican is alive). A pelican flies into the side of a barn, and a pelican flies into a wall. A pelican flies into farm equipment, knocking things down and causing a racket. A pelican falls off a bale of hay. A pelican is introduced as a "hit bird" on the run from the Mafia, which wants to "whack him." A pelican drops feces on a rooster, which is hit in the face and runs screaming "acid rain"; a pelican tries to drop feces on a horse, but it splatters on the ground near the horse instead, and a pelican drops feces on a woman's hat brim and it dangles from there. A fly goes into a horse's nostril, the horse blows the fly out, and we see the fly covered with mucous stuck to a piece of electronic equipment. Two flies are swatted and tossed into a pile of dung, and they take a big bite with pleasure. One character says to another character, "go choke on an apple." Flies sing and talk about eating "fresh, hot doody." A fly is shoved and lands headfirst in a plate of food, and it is then swept into a dustpan. A fly falls into a cup of coffee and flatulates as it swims through the liquid. A fly flatulates inside a bubble that fills with yellow gas. A zebra burps, a fly burps, a fly flatulates. A woman shoves people out of her way, a goat kicks a pony, and animals tease and insult each other in many scenes.

LANGUAGE 2 - 5 anatomical terms (2 mild and 3 in reference to a farm animal), 1 mild obscenity (dang), name-calling (idiot, freak, loser), a character says something like "fashisl" in a derogatory manner (it's not clear what it means).

MESSAGE - Believe in yourself. Being different can be scary, but it should also be celebrated. Nothing good ever comes easy. 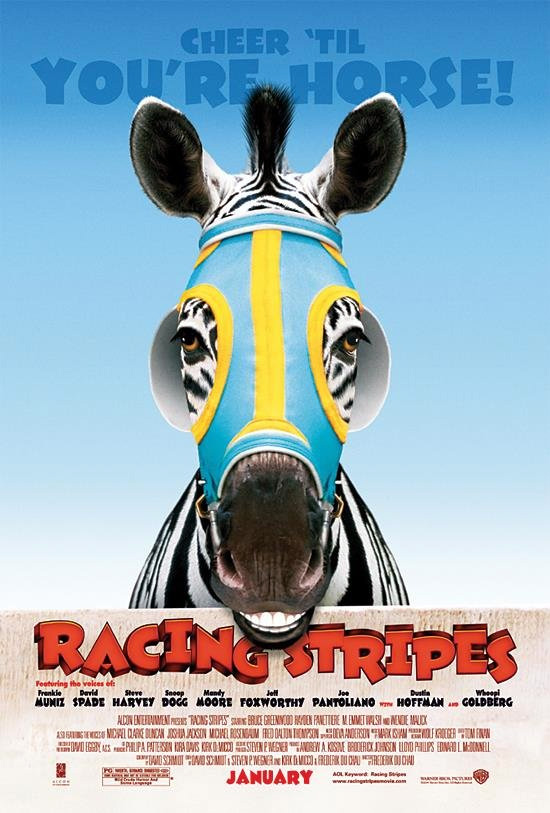